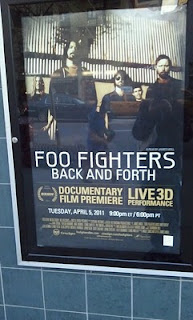 It was surreal to attend a movie about Dave Grohl’s band that was built on the ashes of Nirvana on the very day that marked 17 years since Kurt Cobain’s passing.

April 5th, 1994 is a day burned into my memory, not because I was such a huge Nirvana fan, so much as I became a kind of spiritual godmother to the reams of younger people I knew who loved him, and who came to me that day in tears. Grunge hit when I was in high school, and I grew to love the dirty, loud sounds of Soundgarden, Alice In Chains, and most especially Pearl Jam. I appreciated Nirvana’s loud, abrasive stance, but didn’t warm to them immediately. I never felt an urge to see them live, much less to buy their album, but I like the spirit of what they were doing. Grunge was my generation’s punk, and it was the alarm bell for a wider world in my narrow, grayishly polite suburban world.
“Heart-Shaped Box” was always a more deeply affecting song for me than “Smells Like Teen Spirit”, which seemed too clever and bratty for its own good. Instead of a stream-of-consciousness rant that riffed on teen experiences and peevish observations, I preferred the tortured, life-lived wariness of a scarily romantic, co-dependent love gone sour on itself:

There’s something awfully frightening -and thrilling -about that song, which kind of sums up the public perception of Cobain himself in some sad way. 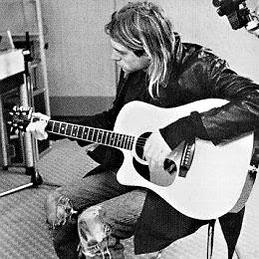 Foo Fighters: Back And Forth doesn’t shy away from the Nirvana legacy, but fully embraces it like a long-lost lover. Grohl reminisces on life as a suburban Seattle-ite, his love for punk, his influences, and his love of a band unit. Cobain’s stumbles and setbacks aren’t shied away from but, refreshingly, aren’t exploited either. The look on Grohl’s face as he haltingly names Courtney Love and adds, awkwardly, “his… wife” was bittersweet, if thunderously sad for the bad blood it implied. Overall, I would’ve liked more 90s-formative-stuff from the doc; I suspect some Foo fans don’t understand or appreciate the huge shadow Nirvana casts on Grohl’s creative output, and to my I-remember-when head, that’s pretty key to getting what he does now. Alas, much of it was left out in favor of more Foo-centric material, though the most important event wasn’t shown at all. And that had nothing to do with the choices of Oscar-winning director James Moll.
Owing to a technical glitch (or perhaps grand design), the screening blipped when the tortured singer/songwriter’s overdose in Rome was portrayed. All we heard was Grohl, saying over and over again, “I don’t know” and a shot of the Rome American Hospital and a cop in uniform standing outside. It was like something out of the Emergency Broadcast Network, or Derek Jarman, or William Burroughs (or all of the above). By the time the screening returned (it was being shown on a satellite signal from L.A.), Cobain’s passing had already happened. A whole, wholly significant chunk of the film had been inadvertently excised. In a way, I was relieved, but in another way, it felt like a robbery, not only for me, for but the entire audience in the cinema, many of whom would’ve been toddlers at the time of the actual event. The effect of that glitch stayed with me the rest of the night, even as the meteoric rise of the Foos was shown in all its gritty, rocking glory.
“I don’t know.” It was a perfect metaphor for Cobain’s life, and indeed, for the struggle so many artists -hell, people -endure pursuing some nameless, formless sort of creative immortality. I left the theater after the screening and walked by the Chelsea Hotel, located just down from the cinema. Ghosts really are everywhere in New York. Even if they aren’t apparent, their presence is palpable. Their struggle in life pervades the energy of the city, particularly the creative energy. Forget the well-known figures; it’s all the stragglers, the strugglers, the mad, bad, broke ones I notice. 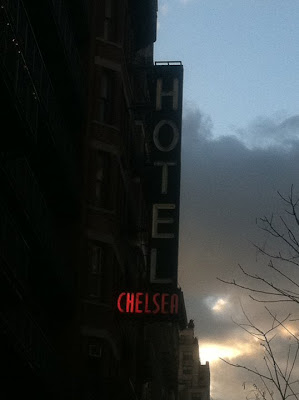 Struggle is a funny thing; it only looks good in retrospect. I thought about Just Kids and about all the artists and poets and lovers and dreamers and… me. Moving slowly down Seventh Avenue, I could feel a million New York ghosts by my side, holding my hand and asking me to look around, take deep breaths, take it step by step. I thought about the woman I’d spotted in the Chelsea lobby, slowly making her way to the door with a walker. I wondered how long she’d lived at the hotel. I wondered how many paintings, drawings, novels, letters, songs, dreams, and rejections she lived with. I wondered if she’d felt as scared, alone, directionless, confused and overwhelmed as I do now.
Ghosts -in a cinema or hotel room, on a dark street, in the creak of a floorboard or the rattles of a window pane -offer mischief, but also hope. Because within the unpredictable is the limitless. Ghosts know this. Maybe I should trust that spirit a bit more. Maybe that should be my new way of remembering April 5th: the Day Of I-Don’t-Know, the Day Of Ghosts, the Day That’s Every Day. Maybe.
Chelsea HotelDave GrohlghostsgrungeJust KidsKurt CobainNew YorkNirvanastruggle

“Sometimes I Feel So Happy”