The Lipsett Diaries is one of my favorite National Film Board animated shorts. Screened as part of the Canadian shorts series at this year’s Toronto International Film Festival, the work is a brilliant interpretation of Canadian filmmaker Arthur Lipsett‘s life and work. It covers his short, tragic life with equal parts gusto and respect, and imaginatively captures the inner torment and outer brilliance of the Oscar-nominated director.

Award-winning director Theodore Ushev spent a good deal of time manically drawing each frame in The Lipsett Diaries. Yes, he drew it. By hand. We spoke about this pain-staking (if rewarding) process during TIFF, and we also explored the vital role music plays in Ushev’s creations. It’s fascinating to listen to him talk, in Bulgarian-accented English, about his passion for Polaris-nominated band Besnard Lakes & as well as Godspeed You, Black Emperor. It really hit me, in speaking with him, about how the two artistic forms I consider the oldest -art and music -have the exhilarating power of reaching past nationalities, experiences, places, and circumstance, to go straight into the territory of the heart, where logic stops and feeling starts. This sense definitely plays into his work.

We also discussed Stanley Kubrick‘s letter to Lipsett upon the latter receiving an Oscar nomination for his landmark film, “Very Nice, Very Nice” and the creative way Ushev animated this amazing moment -as well as Lipsett’s unique (and kind of hilarious) reaction. 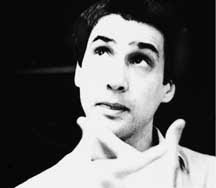 Ushev and I were particularly keen on yacking about the extent to which the deceased director set the standard for later cinematic (and artistic) experimentation in North America. Lipsett was truly a trailblazer in terms of his cultural contribution and unique vision; he utterly anticipated Burroughs’ cut-up technique, had a keen eye for unusual storytelling, and he was one of the few North American filmmakers to embrace surrealism in the early 1960s.

Arthur Lipsett’s death in 1986 came too soon, but, as Ushev’s piece seems to whisper, his artistic spirit is with us now, more than ever. The marriage of sound and art has never been more short -and more sweet.