The Valentine’s Day sillies are upon us once more. As a singleton who’s never really experienced the “romantic” connotations of the Hallmark Holiday, I take the whole thing in stride and tend to draw associations instead with the sticky-sweet days of childhood. Heart-shaped cookies and finger-staining candies, along with cut-outs and tacky cards -that’s Valentine’s Day to me.

There’s a tremendous pressure on female singletons, particularly in North America, where V-Day is taken quite seriously. (That, incidentally, is culturally interesting; I don’t recall the same kind of pressure when I lived in Dublin and London, but then, back then I romanticized everything, turning every day into a kind of maudlin V-Day fest, complete with sappy poetry, long dresses, and plenty of chest-heaving for so-close-so-far Byronic, tortured-artist-lovers. Oh, youth…) Year-round Valentine pressure is everywhere in popular culture: witness the phenomenons of Bridget Jones, Sex And the City, and any number of treacly pop hits.

Lastnight’s episode of 30 Rock featured a defensive Liz Lemon (Tina Fey) trying to find someone to give her a ride post an impending dental surgery. The snag? The surgery fell on Valentine’s Day. In the great tradition of ladies who doth protest too much, the indefatigable Liz huffed and puffed about in hilarious, if equally sad, fashion, loudly proclaiming her independence. Only later, deep in the throes of whirling post-surgery hallucinations, did she acknowledge that she wanted to be loved. It got me thinking: do women need Valentine’s Day to assert their desire for love and acceptance? Following that, do men need the pressure of what V-Day represents to show these things? It all feels deeply unfair -and stupid. 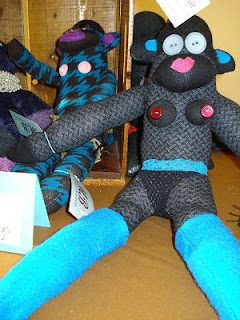 Along with being a fun way of celebrating sexuality, the fair also serves as a great way of connecting people -including many single women, who come in nervous and sometimes shy, and leave, laughing. There’s no pressure for coupledom, and the whimsical, fun feel of the fair imbues a kind of fun, carnival-esque atmosphere. Also, the event nicely builds community through the sharing of artistic ability, something vitally important in the Queen Street West area (which is rapidly becoming a bourgeois hipster haven, eeek). If you’re in the neighbourhood tomorrow (February 13th), pop in the Gladstone Hotel anytime between 12 and 8pm. Single or coupled, I guarantee you’ll walk out with a smile.

It’s Not A Heel; It’s A Mountain