You Can’t Catch Me

In keeping with my contemplations about images of women in popular culture lately, a couple things from the last few weeks have been sticking and bear a bit of examination. Opera was, for many moons, the pop culture of its day; not solely the denizens of the upper classes, it was the place where music, entertainment, theatre and play melded together and foisted into onto a wider social milieu. Images of swooning heroines and brave men abounded, based, as many pieces were, on classical tales from Mediterranean mythologies. A time passed and the world shifted its attention to more current concerns, opera began to reflect what I’d call World Politics Lite; that is, librettists and composers would bring in contemporary themes and ideas reflective of the wider world, but include elements of yore to make the whole thing a bit more palatable. Opera was already a place where questioning the norm wasn’t quite (cough) allowed; making its characters -especially its women -safe, predictable, passive, and victimized allowed for a greater audience catharsis, however insincere and overwrought it may have been.

All of this bubbled up to the surface following a recent visit to the opera. The Canadian Opera Company’s production of Madame Butterfly (closing tonight at the Four Seasons Centre) is beautiful in its simplicity; Brian MacDonald‘s solid direction and Susan Benson‘s dreamy design provide a poetic austerity amidst the washed-out shades and colourings. Adina Nitescu‘s soprano is full, throaty, and lovely, and her acting is keenly felt, and as such, entirely moving. 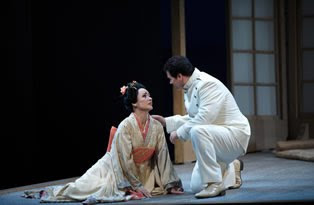 Yet there is something that has always troubled me about the opera; Cio-Cio San (or “Butterfly”) is so terribly naive, her blind, passionate infatuation with Pinkerton and all he represents is maudlin in the extreme, and her willingness to throw over her culture and historical heritage to win validation is deeply unnerving. Along with these troubling notions, there’s the patronizing, stereotypical portrayal of Japanese culture itself. “Isn’t it cute?” the libretto implies, “aren’t these such nice simple people?” The atonal, rhythmic qualities of the music imitates this patronizing attitude; it’s about as Japanese as the teriyaki stand in your local mall’s food court.

The opera is a reflection of Puccini’s awareness of the colonial reach of the U.S. -and, by extension, Italy -but it absolutely reeks of White Privileged European Male-ness. As if to balance all this vitriol, I was struck, in sitting there watching it for the umpteenth time recently, of the sheer gorgeousness of much of the music. Somehow, I reconciled my extreme discomfort with Butterfly’s chauvinistic, colonial underpinnings with Puccini’s genuinely beautiful, dreamy score. It didn’t make any of the issues I have easier to bear, nor did it lubricate the suspension of my disbelief over the next two hours; it did, however, remind me that sometimes it’s better to shut your eyes and listen to the notes, not the words. Of course, once I opened them again, I was hit, strongly, by the pretense of theatre cushioning us, so we can sigh over scenarios that would be anything but romantic in reality. There’s a patronizing, reductive archness to it all that renders Butterfly’s choices insincere and too easy to excuse: “well she’s just a kid… “ This same frustrating sense of reduction happened again with the musical version of Debbie Does Dallas (running to November 8th at Toronto’s Theatre Centre). The musical is based on the tacky 70s porn flick of the same name. Presented by the newly-formed Ghost Light Projects, the work is cute, bouncy, and empty -kind of like Debbie herself. Lead Jamie Robinson is likeable and certainly an ebullient presence onstage, but the premise -Nice-Girl Cheerleader Turns Into Wholesome Whore To Chase Her Dreams -is tiresome and dated. I enjoyed director Penelope Corrin injecting a bit of social commentary in small drims and drams throughout, questioning the outmoded idea that equates selling sexual favours with liberation. There weren’t enough of those moments, alas. More brazenly unzipping the trousers of chauvinism parading as liberation might’ve made for a more powerful piece, even within the admittedly-small corral of the musical itself. Debbie Does Dallas may be all puffery and pom-poms, but it holds a darker, decidedly unpleasant undertone that isn’t funny at all.

Hedwig & The Angry Inch – Origin of Love
by disastr2000

A much better example of liberation in action was Ghost Light’s second, so-called “complementary” production of Hedwig and the Angry Inch. The punk rock musical features some kick-ass tunes along with a juicy lead role -uh, for a man. Still, Seth Drabinsky’s angry passionate portrayal of the East German rock diva icon -not fully male, not fully female -nicely encapsulated the claustrophobic rage at the masquerade of societal gender stereotypes. He was backed up by the incredible sonic power of local Toronto band The Vicious Guns and actor/singer L.A. Lopes, who director Corrin cleverly placed in a beard and drab garb; the ensuing confusion, between Lopes’ masculine appearance and high, searing soprano vocal was a kind of delicious confusion -and possessed a kind of manic, gorgeous opera all its own. The fact Hedwig spits out her memories of living in communist-era Europe also has a delicious timeliness, considering this week marks the twentieth anniversary of the fall of the Berlin wall. It’s as if the zeitgeist of that moment of liberation found expression in Hedwig’s manic energies, sexual and otherwise.

The production itself nicely mixes the busy confusion of sexual politics with the more tender aspects of love, never slipping into the maudlin or saccharine. Corrin innately understands the snarling energy of punk rock and its transformative power in both epic and intimate ways. You change yourself; you change the world around you. That isn’t necessarily a punk ethos either; it’s a human one. Reducing one’s self to bits and pieces reduces the world, and our capacity to move freely in it. The wall’s fallen; the web’s mental. Leave your mark, Hedwig urges, and move on.