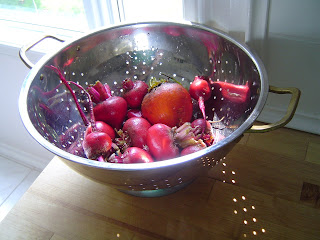 I’m writing this from my kitchen -my place of refuge, my studio, my laboratory, all rolled in one. It’s funny how such a simple change of locale -from upstairs to down -can drastically alter the way one approaches one’s work. No wonder coffee shops are so filled with people on laptops; what is sometimes lost in personal interconnection in such circumstances is often gained in the field of inspiration and initiative (though I’d argue one is deeply connected with the other).

So, after much thought -and a joyous session in roasting beets (more below), I’ve decided to include simple recipes as part of Play Anon. Rather than watering down its content, I feel it will add to, and complement it. Food is as much a part of culture as theatre, dance, painting, sculpture, electronic art, and so on -though it is also vastly more immediate, and I feel, intimate in its nature. Food is what we share as humans. We cannot live without eating. And like all cultural things, it provides needed nourishment -not only to our bodies, but on spiritual, mental, and emotional levels.

Right now, I’m typing with hands softened by good olive oil, just used to anoint the beets which now roast in the oven. I love beets, and always have done, ever since I was a child, standing beside my mother, hands stained purple, carefully peeling, apron firmly tied. I grew up thinking there was only one way to prepare them -that is, my mother’s method: boil to death, messily peel, drown in butter. While I’m not immune to the charms of butter and salt (though now, I’m finding good quality in each harder to come by), I feel treating such a beautiful vegetable so heinously borders on the sinful. Basic rule: if the vegetable is good, it should stand on its own. Period. 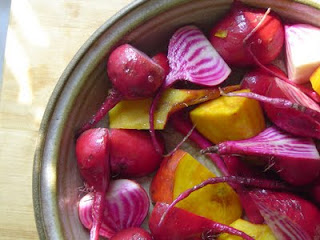 So while I applaud Lucy Waverman integrating beets into various dishes to tempt the palette of any beet-hating President, I prefer my purpley root veg straight-up. Antony John understands this. I had the wonderful fortune of visiting his beautiful farm, Soiled Reputation, last month. Sitting just outside the town of Stratford, Ontario, the farm grows organic vegetables which are then used in many restaurants across the Southern end of the province. Jamie Kennedy, the activist-chef (and one of my very-favourites, for his food and his ethos), uses Soiled Reputation’s veg, including their lovely, feathery greens, filled with sweet and bitter tastes.

One of the things I brought back from my trip was a bag of beets. Though pink on the outside, they’re white on the inside. They yield a sweeter flavour than regular beets, and I am wagering, roast up deliciously.

Roasting is, incidentally, my favourite method, though I have also experimented with marinating sliced beets in good balsamic, and then barbequing, both with foil and without. But there’s something awfully comforting about the smell of roast-anything wafting through the house, particularly as temperatures drop and the season turns. With the advent of autumn, root vegetables come back to prominence at my table.

Depending on the size of the beets, you may wish to slice them (I chopped a few bigger ones in half width-wise) and i always take the top off (the part where the greens sprout), though I tend to leave the “tail” -there’s something so merry about them, even if you can’t (or won’t) eat that portion. 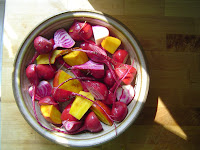 So you will need: 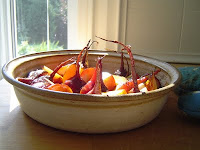 I’d leave them in another 15-20 minutes. Prick with a fork if you’re really not sure but they’ll be making little sizzley sounds to indicate they’re cooked.

Addendum: 30ish minutes did the trick. Delicious, succulent, sweet, and rich. I said it before, I’ll say it again: beets are beautiful. Take that, Mr. Obama.