Reason #3 I need to go to New York

Jenny Holzer is at the Whitney. But only until May 31st. Eeek.

Little did I realize, all those years ago as a teenager I was witnessing a wonderous marriage between high art and pop culture courtesy of Jenny Holzer and a little tour called ZOO-TV. There I stood, pie-eyed and mute and entirely overwhelmed, as thunderous drums and crashing guitar lines rumbled through my consciousness, and my eyes attempted to absorb messages like CONTRADICTION IS BALANCE and EVERYTHING YOU KNOW IS WRONG and ART IS MANIPULATION and (still my favourite) TASTE IS THE ENEMY OF ART. I don’t recall if it was by accident or design that I discovered Holzer’s work that very year, but it was then I started keeping journals of my own observed Truisms -a strange kind of poetic observation that was, depending on my mood, one-part snide to two-parts smirk, or some combination therein.

Years later, I wasn’t a bit surprised when Holzer’s work was chosen to be displayed at the site of the World Trade Center. Looking over the exhibition now on, she seems more relevant than ever.

Reason #2 I need to go to New York

Nominations were announced today and they include a slew for the Elton John-penned Billy Elliott.

This year, I was a bit surprised there were no nominations for The Seagull, or its lead, Kristin Scott Thomas. Though I didn’t get to see it (sadly), I heard a lot of good things. Apparently I wasn’t the only one surprised by its overlooking. Hmm.

Still, the Tonys makes me long for a chunk of the Big Apple. A big singing, dancing chunk.

Reason #1 I need to go to New York 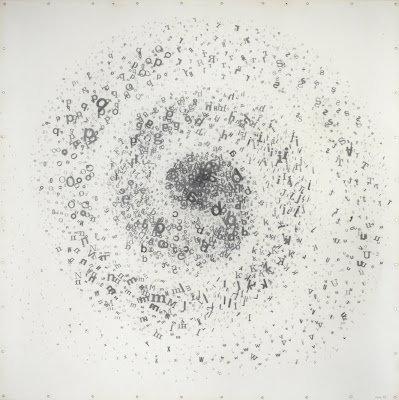 The Museum of Modern Art is one of my very-favourite places in the world. You can wander there for hours, and every corner has something that turns your thinking upside down, and makes you look at the world, and your place in it, in a whole new, refreshing light. It currently has two exhibits I want to see.

First, The Pictures Generation, featuring the work of Cindy Sherman, among others. Sherman’s a big favourite of mine. So irreverent, funny, and unabashedly female.

Second, Tangled Alphabets. I love writing. I love art. I love art about writing. I’ve been staring at Mira Schendel‘s work all week now and her beautiful collection of letters are spelling out something like: C-o-m-e h-e-r-e. N-O-W.