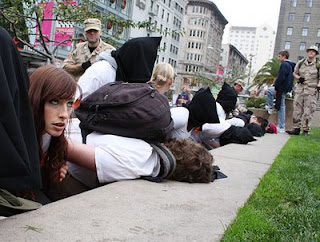 Spending this Sunday prepping for a busy week, I received an email from a Toronto artist and photographer who shared a recent experience shooting a visiting celebrity. It lead to a series of exchanges around the nature of fame, the demands of blogging, and the ways some artistic disciplines translate visually. Expressing his frustration with photographing theatre, he wrote, in effect, “they were just talking. How is that interesting?” Good question -not just for photographers, but for audiences, theatre directors, and companies. He continued:

Maybe I’ve just seen too much theatre recently, but the monologuing of character interaction – where two characters talk past each other rather than to each other – and the lack of passion, emotion, or even dramatic moments seems to be areas where someone could be writing something different.

Don’t you sometimes come out of a play thinking it wasn’t really any different than many others you’ve seen?

Surprisingly, I found myself agreeing with him -though I reminded him that the Robert Lepage work Lipsynch is coming in June. But still, yes, on a personal level, I am sick of talk, or talk-and-shock. I’ve seen some great works, unquestionably, but they’ve been very text-centric, and indeed, after a while, they do begin blurring into one another. To me, theatre is more than talk, and good directors will understand the myriad of possibilities at their disposal. Regardless (or sometimes because) of budgetary limitations, creativity and inventiveness are always the hallmarks of great theatre.

So it was with some interest that I came across this recent post about Operation First Casualty. Visceral, immediate, timely, and unabashedly milking the idea of spectacle, IVAW gave San Francisco residents something to talk about. I have a feeling this kind of theatre affected those who experienced it on a far deeper level than words could ever reach.