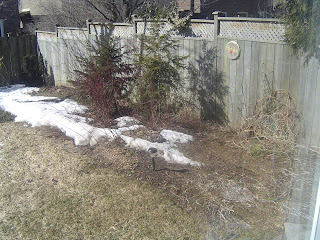 Gardening is work. Digging, planting, watering, weeding, fertilizing, and chasing various pesky creatures away (through sprays, gates, and other means) can be a pain. But the results can be so good.

As a kid, I remember having a huge, sprawling garden in the backyard. We lived in what was then country, and we had the luxury of having a huge yard with few neighbours and even less traffic. Cucumbers, peppers, tomatoes, zuccini and squash, along with raspberries and strawberries, plus fruit trees in the front yard (apple, peach, pear and plum), meant that we didn’t need to go up the road to the farmer’s market too often (except, perhaps, for cherry and blueberry pies… mmm). My great uncle, who tended everything, was a salt-of-the-earth kind of guy who didn’t believe in commercial spraying or fertilizers, so everything was organic by default, and using compost was just the norm.

Living in a more urban environment now, surrounded by development sprawl, the idea of having a backyard garden hasn’t been much of a consideration, until recently. I’d wanted to plant a few things last year, but then I got busy with other projects. This year, I’m determined to try. Being a foodie and a closet gardener (okay, not anymore…), it just seems to make sense now. I know it’ll involve a lot of digging-up and roto-rooting, composting and aereating, but I have faith. There’s something deeply satisfying to me about getting hands (and feet, in my case) dirty with food you’re growing to eat yourself (and share). It’s good for everyone, and everything. Food, in itself, is part of culture; the symbiotic relationship it has in terms of care, process, tending and development, isn’t that dissimilar to other art forms.

I can’t wait for the performance to begin.