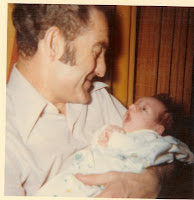 I always marvel at the ability to be able to write strictly for voice, building narrative and shaping tone through sonic means alone. The power of sound can’t be underestimated. It’s something I was reminded of lastnight when I received word that a radio documentary I’d made in 2006 is going to made available online.

Two-and-a-half years ago, I made a trip overseas to see my father. I made a documentary about my experience that aired later that year across Canada on CBC Radio One. It was a part of Outfront, which focuses on personal stories.

“Lanyod” (Hungarian for “daughter”) has been chosen as being among the best of Outfront documentaries, and I’m pleased to announce that it’s available for download at the program’s website this week:

The documentary’s taken on a different meaning for me since my father’s passing this past December. The power of sound has taken on a whole new significance, too. I may never write a radio drama -but then, I’m reminded with “Lanyod,” that I was already part of my own real-life one.