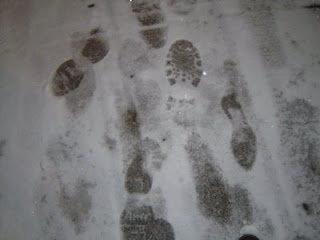 I don’t like lists. It’s the main reason I resist writing hoary old “Top Ten Shows of 2008” sorts of things. Unless a writer/artist experiences a heck of a lot of different things (not just theatre, but music, cinema, telly, & you know, life) they’re going to be creating from inside a navel-gazing bubble. So instead of doing a formal list of shows I liked in 2008, I’m going to provide a few favourite live moments from 2008, along with stuff I’m looking forward to in 2009. Call it the Ghosts of Good Stuff, Past & Future.

–Festen / Someone Who’ll Watch Over Me: The Berkeley Street Theatre ended the year with a duo of powerhouse dramas in both its upstairs and downstairs spaces. Both about families of different sorts, the skillfully directed and acted works were punches to the gut, and stayed with me far past my exiting the theatre’s doors.

–The Music Man / Moby Dick: The yin and yang of the Stratford Festival this past season. Both seeming-opposites, playing in the largest and smallest festival spaces respectively, and yet both had so much in common. I had to think for hours which one was actually more epic -the story of man vs. whale or man-in-a-small-town (on the surface anyway). Brilliantly directed, with charismatic leading men, the Festival made a brave, brilliant choice to have two such works playing at the same time.

–Rachid Taha: The Algerian-French singer’s concert at the Phoenix in July was a mix of Arab, rock, pop, dance, punk, chaabi, and… everything else. In an interview last year, he quoted Frank Zappa in describing his music as couscous. No kidding. A sweaty good time, Taha and his 7-man band played for a riotous, celebratory two-plus hours. Not a word was in English, either. It didn’t matter. Brilliant.

–The Williamson Playboys: Opening the Toronto Sketch Comedy Festival with a host of other acts, the Playboys (played with ferocious playfulness by Doug Morency and Paul Bates) won over the crowd with their mix of gentle, fierce, silly and profound. I haven’t laughed so hard, for so long, in… too long. Lesson learned: you just haven’t lived until you’ve heard Led Zeppelin’s Black Dog played with just a ukelele and tuba.

–Nigella Express / Nigella’s Christmas Kitchen: I know, I know. This isn’t technically a series, so much as it is a chance to ogle the British Domestic Goddess. But the tips are really practical (if you can pay enough attention) and the results are damn good. In this case, it is as easy as it looks. Honest. And Nigella’s love of food is a joyful expression of life -something we all need to remember.

–Election night: After the drama of the Democratics, then the even-more-dramatic U.S. election campaign that featured an assortment of interesting players, the whole thing culminated in a huge gathering in Chicago. Jesse Jackson’s tears, chanting masses, Oprah’s runny mascara, and the President-Elect’s confident waves and smiles made for a moving, affecting piece of real, live theatre. I’ve never seen anything like it. Part 2: The Inauguration, coming soon.

–Blackbird: Written by David Harrower and directed by Joel Greenburg, Studio 180 is back at the Berkeley after last year’s stunning Stuff Happens, David Hare’s deconstruction of the politics behind the Iraq War. If Blackbird is anywhere near as thrilling and compelling, the Berkeley will have another solid play under its roof.

–Antigone: The timely Sophocles tragedy gets the Soulpepper treatment. A favourite play of mine (personal disclosure: I starred in a production in London moons ago), I can’t wait to see powerhouse actor Liisa Repo-Martell in the lead, chewing the scenery a host of other great Canadian actors, including David Storch and Claire Calnan.

–Them And Us: Actor/writer Tracy Dawson’s take on modern relating gets a theatrical exploration. I know, I know, I can hear every male friend of mine yawning at the thought of sitting through a play about… relationships. But if Dawson’s energy is anything to go on (I interviewed her recently), the show is sure to be sarcastic, funny, insightful, and have something for both genders.

–The Entertainer: John Osbourne’s rarely-performed piece (in Canada, anyway) receives a production at the Shaw Festival, courtesy of Shaw Fest Artistic Director Jackie Maxwell. Exploring notions of “entertainment” and our expectations around it, the piece has a timely relevance, and features some of Canada’s finest performers, including Benedict Campbell in the lead.

–The Soloist: Joe Wright’s filmic adaptation of the Steve Lopez book. Lopez is a columnist with the L.A. Times who met the homeless Nathaniel Ayers years ago; the book explores their relationship, and the vitality of music, art, and writing. Featuring Robert Downey Jr. as Lopez and Jamie Foxx as Ayers, I’m thinking this will be one for the Oscar voters next year.

–Jessica Lea Mayfield: The singer/songwriter from Kent, Ohio caught me with her beautiful tune, “Kiss Me Again.” Thoughtful without being pretentious, uncomplicated without being folksy, she’s an interesting combination of Cat Power, Patti Smith, and Joni Mitchell, but definitely brings a style all her own. And she’s only 19. Holy smokes.