In writing about Almost Human recently, I’ve found an avidly involved community of supporters online who happily, passionately exchange strong ideas and opinions; I think back, again, to TV-watching habits of the 80s and 90s (and even 2000s), and I wonder at how and why this shared community might influence the way TV culture is experienced. Of course I think it changes the viewing experience, but I am also a strong believer in putting the computer away, however briefly, and focusing.
It was hard to put everything away lastnight for the season finale of True Detective; a large part of me wanted to observe reactions of others in real time, even as I shared my own. But I found myself so entranced by the show’s attention to detail (a hallmark of its greatness, surely) and wanting to roll around in the swampy soup of ideas it presented, I put the tech aside and just watched, listened, felt. Having chosen to severely limit sharing my reactions online (and not read anyone else’s), I found myself with mixed feelings, questioning its strange if compelling mix of predictable suspense tropes, character development, and meta-dramatical elements. The extended scene of Rust (Matthew McConaughey) and Marty (Woody Harrelson) finding their way through the wilds of the Childress property made for terrifying, compelling television; each character became more and more entangled within the maze, mirroring the viewers’ “entanglement” with the immediate situation, and more widely, within the entire series. The deeper they got, the deeper we got; I became entranced, enchanted, utterly entangled, and didn’t want a way out.
“This is Carcosa,” intoned an eerie, disembodied voice.
Less a physical place and more a mental dwelling, we – us  TD fans – fell into Carcosa, this wild, surreal enclosure that knows our deepest fears and vulnerabilities, a place that speaks in riddles but voices truth – not the beautiful poetic kind, mind you, but the ugly sort that, like the Fontenot video, we don’t want to watch but can’t turn away from.
This is what the best storytelling does: it drops you into an atmosphere of intense fear and suspense, slowly, skillfully guiding you through the deepest recesses of your life and imagination, to a place of wordless wonder and messy obsession. It’s a swampy dialectic energy – of light and dark, of isolation and community, of black stars and Yellow Kings, of innocence and experience, of water and land, of strangers and family, of the flat and the shapely – that powered the drama of True Detective and ultimately shaped its characters. Such energy also gave rise to the program’s fandom, for it was an energy we felt, and wanted to talk about, and share, and mull over. In compulsion to theory, we found community in exchange; in suspense for resolution, we found salvation in the process.
Nothing feels resolved in the True Detective world. To paraphrase Rust, there’s more of them out there. There’s more darkness, more evil, more loss; this isn’t over. Everything is a spiral. The stories continue. The finale’s crazy-bogeyman-of-the-Bayou cliches (the hoarder house; the incest; the slovenly appearance) were clever storytelling tropes meant to further the meta-dramatical aspect of the program: are you not entertained? Do you want more? Once upon a time… if you go into the woods today, you’re in for a big surprise…
We want the spirals; we need them, to cycle through them, to feel their sharp edges and dizzying curves. We need that, just as much as we need (and ultimately want) to go in the woods. We want the darkness. We want Carcosa. That’s unsettling – but so is imagination, and the compunction to create. I’m reminded here of something Nick Cave said in his “Secret Life Of The Love Song” lecture series years ago (emphasis mine):

Those songs that speak of love without having within in their lines an ache or a sigh are not love songs at all, but rather hate songs disguised as love songs, and are not to be trusted. These songs deny us our humanness and our God-given right to be sad and the air-waves are littered with them. The love song must resonate with the susurration of sorrow, the tintinnabulation of grief. The writer who refuses to explore the darker regions of the heart will never be able to write convincingly about the wonder, the magic and the joy of love for just as goodness cannot be trusted unless it has breathed the same air as evil – the enduring metaphor of Christ crucified between two criminals comes to mind here – so within the fabric of the love song, within its melody, its lyric, one must sense an acknowledgement of its capacity for suffering.

“Take off your mask,” Childress hissed at Rust as blood dripped from the detective’s gaping wound.
This demand exists in tandem with the program’s final scene of Rust and Marty together, escaping the hospital and contemplating the stars. Rust is rendered vulnerable at last, confessing that during his time in the woods, “I could feel my definitions fading... all I had to do was let go, man… I could still feel her love there… nothing but that love.”
Take off your mask: this is what the best art demands of us. Let go of your safety. Let go of your identity. Embrace your need for the story. Embrace your darkness, and gather around the light. We need to share tales. What offers comfort, if not permanent escape, is friendship – the light and warmth of connection with another equally scared, equally vulnerable human being. So long as we can see the stars, we will keep telling stories – to ourselves, for ourselves, with our friends near and far. 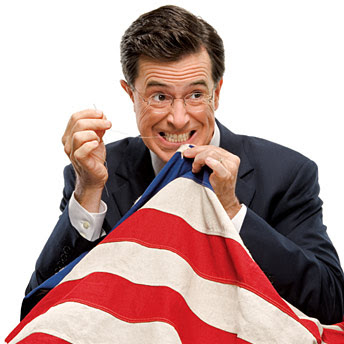 One of the happiest memories of my time in New York City involves attending a taping of The Colbert Report last week.

Getting a ticket was sheer luck; attending was (and I know how corny this sounds) utter magic. The staff is fantastically helpful, the crew is genuinely friendly, and the host is utterly unpretentious. Mr. Colbert came out, all smiles, high-fived those of us lucky enough to be seated in the front row, and addressed a few audience questions. I kept putting my hand up, and just when I thought he might turn away (there was, after all, a show to tape), he turned to me. No, I wasn’t nervous. i was curious.
Those who know me well understand the special place Lord of the Rings has in my heart. The popular film interpretation of J.R.R. Tolkien’s literary masterpiece was released just before I moved back from the U.K. in 2000, and it hit a deep nerve. Its theme of friendship, goodness, of carrying heavy burdens and resisting the urge to give in to ego and selfishness resonated then, and indeed, still does. Knowing Mr. Colbert is a big Ring-ling, I was curious to find out who his favorite character from the work is. He’s spoken at length about it on various episodes of The Colbert Report (and apparently his dressing room is a Rings shrine), yet the character he most gravitates to had, up until last week, remained a mystery. 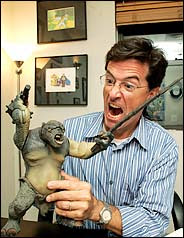 There was something utterly unique about connecting with someone so famous about something so … utterly unto itself. Even with the popularity (and acclaim) of the films, those who love Lord Of The Rings feel like members of an exclusive bar where there are drinks like The Suffering Balrog and The Middle Earth Tripper, and we can rhythm off the ingredients and technique with healthy dollops of ease and delight.
The work’s tangle of characters, histories, and storylines, combined with powerful mythological underpinnings and strange-but-familiar tone renders its appeal very specific and beloved. Many will have seen the films; few will have read the book(s); those of us who’ve done both still sometimes have to refer to charts detailing relationships and bloodlines and maps outlining key locations. Why go to all this trouble? Because it’s a tale that touches the heart, while being hugely relateable: ordinary person doing something extraordinary -and failing, but for the grace of those who care and want the best. It’s epic, it’s intimate, it’s timely and timeless, it asks a lot but returns even more.
And so it was, Mr. Colbert answered my question with much grace and reverence, which heightened when he (quickly) realized he was in the presence of a fellow fan. Little did I know there was a timely segment referencing Lord Of The Rings on that night’s show.
Rings character Faramir said the following, when he was given the chance of owning the One Ring, and I think, intoday’s climate of political adversity, international suffering, and religious hatred, it has a particular resonance:

I would not take this thing, if it lay by the highway. Not were Minas Tirith falling in ruin and I alone could save her, so, using the weapon of the Dark Lord for her good and my glory. No, I do not wish for such triumphs, Frodo, son of Drogo.

Thinking back to Stephen Colbert quoting these lines to me feels like a kind of lesson, and warning; when it would be most easy to give in to ego, to sadness, to self-pity and fantastical escapism… don’t. It’s not the right thing to do. It’s more noble to go the hard (if honest) route. It’s more authentic, too.

Thanks for the reminder, Stephen. Next time we’ll have to talk about hobbits, orcs, elves and goblins. For now, I’m going to memorize those lines. Oh, and I want one of those figurines.

I’m shocked and saddened to learn tonight about the death of one of my favorite food personalities, Canadian host Ken Kostick.

I interviewed Ken along with his TV partner Mary Jo Eustace two years ago, as they were preparing for another season of He Said, She Said (related Mary Jo-centric blog here). Their salty banter and biting commentary made for a lively interview, and I’ll never forget Ken’s kindness toward me, and the immediate interest he took in my own cooking endeavors. I’ll always remember us trading tips about spicing and roasting. He made me feel truly at ease.
His death is a big loss not only to Canadian food TV but to the worldwide market, and to every budding chef. Thank you, Mr. Kostick. You will be missed.