There’s something strange, if marvellous, about seeing a character you think you know in a new light. Sure, your expectations are upset (who goes to the theater without a shred of them, really?) and the image you may’ve held in your mind’s eye might become woozy, if not outright shattered — but isn’t that a good thing? What’s presented before you in a live setting isn’t meant to conform to your specific worldview; it’s meant to challenge it, and offer new, sometimes surprising ways of looking at people and situations. This new presentation enlightens even as it may enrage, making both the micro and macro details of every day living both more understandable and inscrutable, asking us to open hearts and minds in an attempt to bridge our individual selves with a larger ‘self’ that connects all humans.

All of this comes to mind with M’dea Undone,a world premiere from Toronto-based Tapestry New Opera (with Scottish Opera), and currently on now through Friday. Essentially a re-telling of the Greek myth of Medea, the story (with libretto by Marjorie Chan and music by John Harris) has been stripped of its mystical elements and placed firmly in the present, with the titular Medea (Lauren Segal) now a kind of war bride (if not an officially-married one) to Jason (Peter Barrett), a decorated military figure and close advisor to the President (James McLean). Medea is a survivor of war atrocities, and is presented as having a Middle Eastern background, giving her and the work a contemporary feel that is greatly enhanced by the company’s choice of location, an old warehouse, open to the elements, at Toronto’s Evergreen Brickworks. As the sounds of traffic and birds co-mingle, the voices of the ensemble rise up, offering a sound that is both against and absolutely a part of nature. This isn’t theater as cold, rarified, high-art-museum stuff, but rather, a kind of a home, one that is welcoming, inclusive, and, it’s worth noting, interactive. (The audience and performers freely mingled in the yawning stage space following the evening’s final bows, something I wish would happen more at live cultural events. This kind of friendly, unpretentious, intimate interaction needs so much to be a larger part of the performing arts.)

English director Tim Albery expertly makes use a set that spans the warehouse space and is composed of various staircases, bridges, and simple set pieces, allowing for a world that is at once exposed and vulnerable as it is cloistered and confined. These elements gain in importance as M’dea Undone unfolds through its tight 70-minute running time. The work is a gripping ride of tragedy, torment, and it must be said, terrifically great singing and acting. Jacqueline Woodley, as the President’s daughter Dahlia (Glauce in the Greek myth) expertly twists her pretty soprano tone into a sneering, squealing expression of haughty entitlement, while McLean, as her father, veers between rumbling bonhomie and self-congratulations before moving to aching anguish. Peter Barrett, as Jason, offers a truly heartbreaking performance, his elastic tenor providing just the right amounts of tenderness, anger, outrage, and desperation, never indulging in one too long or veering into melodrama. Segal offers a towering portrayal of a woman wounded by love and war; her rich, luscious mezzo-soprano tone perfectly captures both the sensual allure of the character, with a wonderfully incisive reading of Harris’ jagged score that underlines and continually re-emphasizes the character’s inherent humanity.

It’s this quality that makes one re-think the character of Medea herself. I’ve always liked and been drawn to the mystical elements of the character — a kind of Greek-mythological Stevie-Nicks-type, casting spells and spouting incantations — but it’s the woman beneath the sparkling veils (literal or figurative) that makes M’dea Undone so special. There have been many great Medeas to have graced the stage (Diana Rigg, Helen McCrory, Seana McKenna) and all of them offer a special take on the damaged woman of Euripides’ great tragedy. Tapestry’s work continues this tradition, but forces audiences to see past the sorceress elements; while they are certainly central to her character, M’dea Undone asks us to consider what power the character might have if she was stripped down entirely, robbed of her spirituality, robbed of her country, robbed of her culture, and ultimately, the man she loves. What would she do? As the New York Times’ Vincent Canby noted in 1994, “(t)o play her mostly as victim is to humble one of world literature’s most titanic creations.” No kidding.

It’s good Tapestry doesn’t fall into this trap — Medea here is certainly ill-treated but she’s hardly a victim. And though the way she chooses to exercise her power is horrific, there is something horribly, disconcertingly human about it. We recognize her in a chilling way, and we know the way things will inevitably end. But, knowing the ending in no way diminishes the overall power of her choice, or of the work itself. Instead, what we are left with is an unsettling portrait of damaged people in damaging circumstances, grappling with issues of love and betrayal. As with many Tapestry productions, M’dea Undone gracefully push the boundaries of the live opera experience into new, fresh territory. It may not always be a comfortable ride, but it’s one well worth taking. 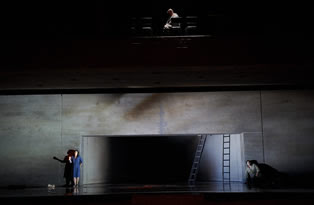 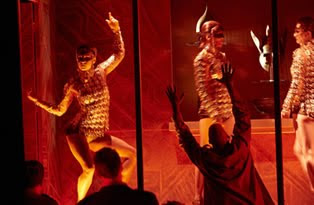