Tiptoe Through The West Side 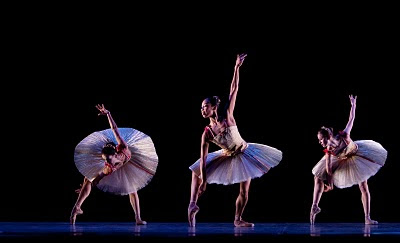 Who knew ballet could be so many things at once?

The National Ballet of Canada‘s summer mixed program, playing as part of this year’s Luminato Festival in Toronto, is a heady mix of contradictions. The first third, “Pur ti Miro”, features the music of Beethoven and Monteverdi; the choreography in the piece, by hot dance figure Jorma Elo, is regal and joyous. The second piece, “Opus 19/The Dreamer” features the choreography of Jerome Robbins and the music of Sergei Prokofiev. The last third is “West Side Story Suite”, based on the legendary musical by Leonard Bernstein, features Robbins’ choreography once more, along with colourful, lively dancing, snaps, and vocals. 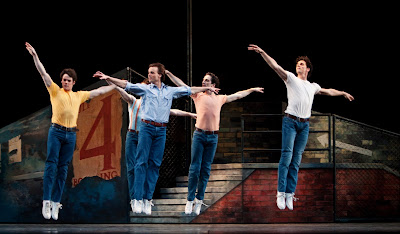 With short sections, hummable music, and gorgeous visuals, the mixed program has a little something for everyone. It was with great delight that I noted the incredible number of enthralled children in attendance at Sunday’s matinee performance, as well as numerous twenty-something hipsters. Kids get the liberating quality of dance that is, for the most part, sadly lost in adulthood. It was fascinating to observe their reactions to the music and the moves, and to observe their deep, immediate connection with the dancers.

I was equally struck by the various emotional chords that were hit within the show: funny, sad, whimsical, sad, sassy, melancholy, meditative… innumerable shades of the human experience were expressed with a turn, a hand, an arm wave, and even vocally. It’s become something of a recent phenomenon to have dancers vocalize during a performance; as with Wen Wei Wang’s Cock-Pit (presented in Toronto earlier this year), vocals are a pure enhancement of the inherent drama and silent magic of movement. We take talking -and moving -so much for granted, but to have both, within a kind of vacuum, be used for sheer expression, feels like a revolution. I could only help but wonder what Nureyev would think. 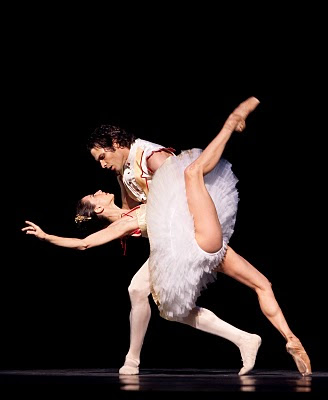 Still within the revolutionary vein, I was bowled over by seeing choreography to one of the most famous pieces of music in the classical canon. I grew up hearing Beethoven’s sole violin concerto in a concert hall; it felt new, strange, and surreal to see dancers leaping around to the concerto’s exuberant third movement. It was interesting to note how the program itself was structured as a kind of journey from traditional to pseudo-modern too; moving from the old-school world of Beethoven and Monteverdi, onto Prokofiev, and Bernstein, was like a nod to a variety of dance styles and expressions.

While I enjoyed the meditative nature of “Opus 19/The Dreamer” (the silent drama between Patrick Lavoie and Sonia Rodriguez was scintillating) and adored the vintage-thug moves and hip-swinging snaps of “West Side Story Suite”, it was “Pur Ti Miro” (roughly translated as “I simply aim for you“) that affected me most deeply. Call it sentiment, call it old-fashioned, but there was something in that old-meets-new ethos in that piece (a world premiere, no less) that felt completely provocative and, weirdly, new. Its juxtaposition with the more modern Robbins works felt like just the kind of balanced contradiction that shapes a festival like Luminato, and, I suspect, will come to define, in many ways, ballet of the twenty-first century.

All photos by Cylla von Tiedemann.