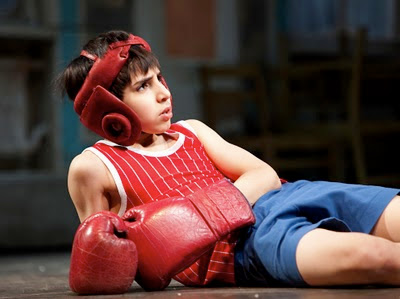 Based on the 2000 Oscar-nominated movie, Billy Elliot is the story of a boy in a small town who dreams of being a ballet dancer. Set in northern England against the backdrop of the year-long 1984-1985 strike that saw the decimation of the British mining industry, the film was a cheering portrait of someone beating the (considerable) odds. Musical composer Elton John, book and lyric writer Lee Hall, and director Stephen Daldry saw the rich potential for staging that lay within Hall’s original material, and in the early aughties they set about to transfer the film into the theater. Shortly after its 2005 opening, the production became a major success, spawning productions in Sydney, New York, Melbourne, Chicago, Seoul, as well as a touring show. It won ten Tony Awards in 2009, and has been seen by over six million people around the world. Brought to Toronto by Mirvish Productions, the show is currently on at the Canon Theatre in Toronto through to July 10th.

Billy Elliot opens with black and white footage of British miners from the 40s and 50s, then moves into news clips from the miners’ strike, when the picture becomes decidedly more grim. This prologue sets the stage for the struggle that takes place between miners and police and workers and government, but, in a larger sense, the battle is internal, occurring within the people in a small community whose perceptions of the world around them inevitably, irrevocably alter as a result of new harsh economic realities. It’s not accidental that Billy (Cesar Corrales) starts off in boxing class; he’s going to need to how to throw punches, as well as take them, if he’s going to survive in this harsh world Daldry has painted. 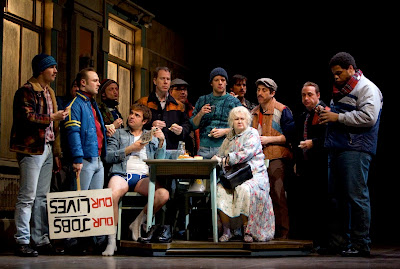 There’s something heartening about the way the English theatre powerhouse portrays this world. He stages even the most basic of scenes – blue collar workers chiding their kids or hoisting signs, or finishing breakfast -with the utmost respect and love. No twee presentation of quaint small town folk, this is a show with balls; people swear (including kids), throw punches, get drunk, and get bloody. In one telling moment, Billy’s Granny (Cynthia Darlow) muses on the abusive marriage she endured. In another, dancing bobbies sing about sending their kids to private schools as they wield batons against striking workers. Maggie Thatcher’s England has never looked less rosy (or more contemporary – I couldn’t help but think of recent scenes in Wisconsin). The story of Billy and his love for dance works as a kind of metaphor for hope and regeneration against decay and inertia. It also offers the solace of arts and culture as a means of not only escape, but more importantly, connection -between people, classes, and communities. Culture isn’t the sole domain of the upper classes, either -in fact, it’s frequently what hold communities that are in flux together. Billy Elliot makes this point again and again. It remains to be seen, however, how many from the opening night audience will be buying tickets to the National Ballet‘s next season. One can only hope.

Complementing the musical’s strong choreography is its gorgeous design, which is highlighted when Billy and friend mischievous Michael (Dillon Stevens) invade the latter’s sisters’ closet, and are soon joined by gigantic dancing dresses (& a cancan-kicking pair of trousers). It’s a fantastic contrast to the bleak town sets and riot scenes and is a wonderful expression of the power of imagination. The surreal staging blended seamlessly with the upbeat pop music and the pre-Gaga theme of being true to yourself, and was a true celebration of what “play” really means, and how important it is to engage in it. The scene ended with some fantastic tap dancing from the two young boys, with Stevens especially stealing the show with his big personality and dynamic stage presence. 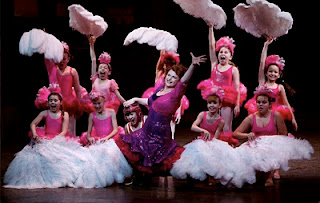 Kids feature largely in Billy Elliott, and I was also impressed with the gaggle of little ballerinas who dance both within their own group as well as between riot police, miners, and parents; their delicate, diaphanous, white tutu’d presence is a lovely counterbalance to the heavy textures and drab colours costume designer Nicky Gillibrand layers the adult world in. Choreographer Peter Darling is a complete genius in blending the children’s and adults’ perspectives, seamlessly integrating the two to produce something both deeply unusual and visually sumptuous. Billy Elliott doesn’t shy away from engaging in some surreal eye-play, but it’s part of its magic appeal, and it certainly makes the return to the story -the struggle for Billy to attend the Royal Ballet School – all the more vivid and engaging. As their teacher, Mrs. Wilkinson, Kate Hennig brings a ton of heart, attitude, and no-bs honesty to her role; the exchange she has with Billy’s father (Armand Schultz) on a snowy Christmas Eve doorstep is shattering, and touches at the heart of the class-based issues Billy Elliot revolves around. One isn’t left with any certain answers about who’s right and who’s wrong.

What is certain is that everyone who attended the show’s opening night was leaning over or turning around to get a clear view of Elton John.. His music is stellar, shining as only the score of a true Rocket Man can: ebbing and flowing between aggressive, loud sounds, jaunty pop numbers, and quietly emotional ballads, John shows the full range of his considerable songwriting abilities. Billy Elliot’s score references everything from classical (the choral harmonies at points brought to mind Verdi’s Nabucco and Wagner’s Tannhauser) to rock (especially Queen) to sixties favorites (I swear I could hear The Ronettes hovering around the edges of certain numbers), to other musicals (chiefly Les Miserables), each time breaking and exceeding expectations around what a contemporary musical can and should sound like.

The miners’ song “Once We Were Kings” was an especially powerful moment that showed off both the male ensemble’s strong harmonics as well as John’s profound ability to write operatic, captivating music that works beautifully within set designer Ian MacNeil’s haunting stage setting. Set intentionally after Billy’s big solo number “Electricity” three quarters of the way through the musical, the song is a hymn to the fuel that once fueled a town’s fires, a solemn if proud testament to both the intense toil of a community and the extinguishing of a generation’s “electricity”. The miners’ hats provided a starry (if occasionally blinding) cascade of light into the audience, which is made especially dramatic for the shadowy darkness lighting designer Rick Fisher employs to imitate the effects of journeying deep into the pit. The effect was an eerily powerful symbol of the theme that flashes through Billy Elliott: hope. 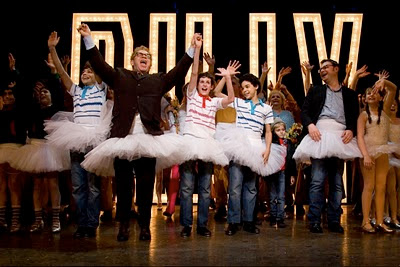 It’s that quality, shining as a bright as a lighthouse beam by the musical’s end, that fuels an audience’s fire. Billy’s literal “flying” may be technically impressive but it’s the heart of it that really matters: witnessing his literal soaring, we recognize our own figurative capacity to open to new things, eyes wide open, arms spread wide, ready for take-off. Billy Elliot matters because it shows us the electricity for a new way of being amidst the detritus of the past. This is a Big Musical in every sense, but it never for a moment falls into the hokey theatrics that mar so many efforts of its ilk. Funny, frank, moving, and more than a little profane, Billy Elliot is one theatrical experience that wears its heart on its spit-stained sleeve -even as it tap-dances by you, feathers, blue collar, and all. Hold me closer, tiny dancer… and don’t let go.