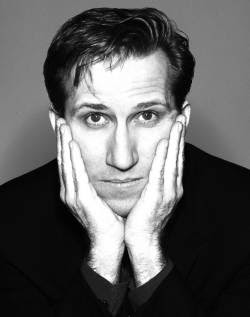 It’s hard to know where or when I first heard the name “Mark Kostabi”, but I am sure it was on television.

I recall seeing the California-born artist on both Oprah and Eye To Eye With Connie Chung in the 1980s, when the art world was buzzing over his bald, smooth figures and his Warhol-esque Kostabi World. I remember admiring both his personal style as well as his attitude; equal parts intelligence, sneer, smirk, and sulk, he was so much more of a badass than any of the music-world idols my friends liked at the time.
So it’s probably fitting that I got the chance to meet Mark Kostabi in-person at a taping of his own television show recently.
The Kostabi Show is a funny, profane, profound, and a fantastically timely comment about the nature of art and democracy. Also, it takes the piss out of the whole idea of ‘high art’ and what that means for the average individual. Intriguing? Yes. Boring? Never. Infuriating? Occasionally. 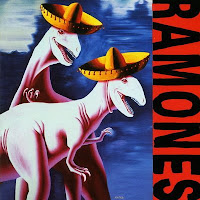 Indeed, that could sum up Mark Kostabi’s life. Having studied painting and drawing at California State University, he moved to New York in 1982 and quickly became a leading figure in the burgeoning East Village art scene. In 1987 his works were exhibited internationally and in 1988 he founded Kostabi World, where he employed numerous paintings assistants and ideas people who would contribute to (and sometimes entirely paint) Kostabi works. He’s done designs for Swatch and Bloomingdale’s bags (one of which he gave away during last week’s taping), and his work is part of the permanent collections of some big-name places: MOMA, the Metropolitan Museum of Art, the Guggenheim, the National Gallery (in Washington), and many more. He’s done a bronze portrait of Pope John Paul II and had several books written about him. Oh, and he designed the album covers for (among others) two little bands you may have heard of: Guns n Roses (yes, he did Use Your Illusion) and the final release from The Ramones, 1995’s Adios Amigos. Not too shabby.
This engaging mix of high and low (and Pop) art is reflected in The Kostabi Show. It started as a series of phone calls – literally. Bored by the business meetings he’d have to be part of as a young NY artist and inspired by the films of Andy Warhol, he began taping the conversations, and broadcasting them on public television. 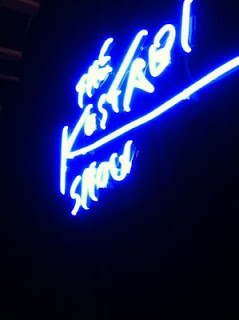 “I thought, if I filmed these (conversations), they’d be more fun, like a kind of performance,” he explains. “I had a lot of business meetings on the phone, so I put up a camera and filmed me at a desk talking to real art dealers who were haggling with me. Every phone call I had, I recorded. People were getting hooked the same way I got hooked on that phone call, just knowing it was real.”
Inside Kostabi was a big hit with the art world crowd, and was, says the artist, “a precursor to reality TV.”
Part of the show involved titling sessions with a variety of Kostabi’s friends and associates, including art critic Robert C. Morgan, who inspired the idea for the first formal competitive-titling show. Name That Painting, as it was called, began in 2007 a legal threat from the Name That Tune people forced a change and it became Title This, but when people would refer to it, they’d say simply “the Kostabi show.” It stuck. Talk about branding.
Airing Wednesday nights at 8.30pm, the show features competitive titling rounds as well as musical interludes, provided by an in-house band that features a talented ensemble, including Kostabi himself on piano. (More on his musical journeys in an upcoming post.) It’s a fascinating mix of people and ideas, with one over-riding theme: paintings should have names. How and why those names are arrived on is a big part of what makes up the show. A panelist of three celebrities gather to be presented with a series of Kostabi works. Past panelists have included jazz musician Ornette Coleman, Sex Pistol Glen Matlock, and the inimitable Tommy Ramone. Once the panel has suggested titles, the assembled studio audience holds up panels, colored red on one side and green on the other, to vote on the titles. Whoever wins gets cash from the erstwhile host and wild applause from the voting public sitting in the bleachers. 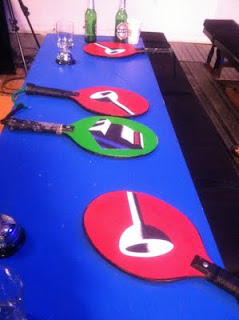 Watching the show was funny, amusing, frustrating, emotional, mind-boggling, and more than a little absurd, as Kostabi, ever the showman, jumped between panelists to audience members in desperate attempts to nail down titles for his gorgeously sleek, voluptuously elegant works -which, like Kostabi himself, are still the subject of both passionate adoration and scathing criticism.

For all the fun (and free pizza at intermission!), I had to remind myself to look forwards, at the show, and not around me, where those debated works hang like so many colorful drops in a gorgeous, smooth waterfall of shape and form. This isn’t about contemplation, I told myself, this is about diversion. And yet it’s an important kind of diversion -isn’t it? Was I being conned?

Beautiful paintings came and went with breathtaking speed, and the questions kept coming: Who does art belong to? Who cares? How does originality matter (especially in the digital age)? How does a title shape a work, a painting, a TV show, or indeed, a person?

As Kostabi himself reminded me when we recently met, Picasso didn’t think titles were of any great import, while Marcel Duchamp thought they were of huge significance.
“I’m somewhere in the middle,” he said, flashing a brilliant smile.
In the middle, maybe. But never, ever mediocre.