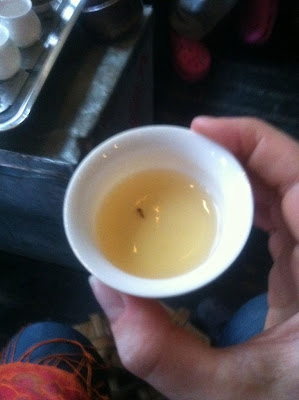 As I poured hot water over my Bewleys tea bag this morning, I thought about the art of tea-making, and how much it’s changed, or at least been simplified and degraded by the busy nature of modern life. I enjoyed a thorough education in the fine art of tea and its enjoyment yesterday afternoon at the lovely In Pursuit of Tea, on Crosby Street in Manhattan.

Housed in an inconspicuous part of Soho, IPOT specializes in fine teas and hosts regular tastings. My host, co-founder Sebastian Beckwith, graciously made the assembled a variety of teas –white, oolong, green, black, and pu-erh -in the classical style: using delicate pieces of fine china to brew, and providing dainty Oriental tasting cups for attendants. Sebastian provided a wonderful background to each tea, too, in a casual, conversational way, sharing stories about his recent travels through China and about the vanishing arts that contribute to the manufacturing of certain types of tea.
Like my last tea-tasting with Stratford, Ontario’s very own tea sommelier Karen Hartwick at Toronto’s Hart House, the experience of tasting various teas, and of sharing my observations with the assembled, transported me into an older, more deeply sensual world, one where the eyes, ears, tongue and heart work in perfect harmony. Having Led Zeppelin play in the store’s intimate environment added a sexily jagged rock and roll vibe, and provided the perfect bridge between old world and new.
A big part of the old world, Sebastian explained, is the way various teas are handled. Women who know how to treat and process certain green teas – with their own hands – are slowly dying, and they aren’t passing on their knowledge to a younger generation, not because they don’t want to, but because the younger generation isn’t interested in learning. The same processing could be done via machine, but it just isn’t the same, in either taste or experience. It would be, I observed, akin to kneading bread by hand or using the quick-rise, no-knead version. Sure, good, but… not the same. It’s a question of personal taste. 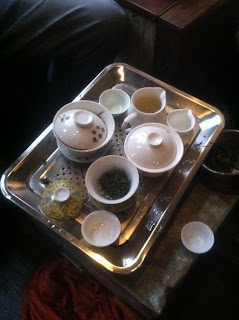 The same holds true for writing. I recently attended an event at the wonderful Eyebeam New York;. the happening was done with Moleskine, the good people behind the beloved, legendary journals, notebooks, and other fine writing accessories. In my next blog spot, I’ll be going into more detail about the nostalgia for older, more tangible forms of art. You see it reflected in the craze for vinyl records, for gardening, for home cooking. People want to experience life sensually, while holding on to (and developing) their digital identities. In fact, they’re interested in linking the two. There’s a fascinating kind of circular experience happening in popular culture.
That became achingly apparent yesterday as I inhaled the earthy, flowery aromas of infused tea leaves, listened to Robert Plant “ramble on”, chatted and laughed with other tasters, and let the buttery (or grassy, or vanilla) flavors roll around my palate. Tasting life never seemed more rich. Who knew it could fit into such a tiny cup?
More photos from the tasting can be found at my Flickr photostream. 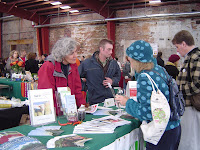 So said by a good friend of mine, when asked about whether she had partaken of the all-night “art thing” that takes Toronto by storm every autumn. We both smiled. I knew what she meant.

I have to admit, the past years I’ve attended have been wonderful examples of community colliding with curiosity. Everyone is out and about, pointing, looking, chatty, silent, laughing, and having a rambling nice time. Then again, there are also whacks of drunken people stumbling along in bad outfits posing as serious artistes. There’s also dreadful lines. And rampant pretentiousness. And gimmicky aplenty. And as Lynn Crosbie pointed out, there’s also the annoying kid-factor. Eeek.

I didn’t attend this year’s Nuit Blanche. It wasn’t out of any malice so much as the strictures of gut instinct telling me to save my energy. Not only have I been sick more often this year than in any other, but I had what I consider a higher calling: 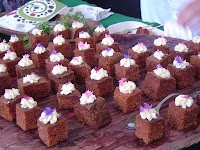 I was attending the Brickworks Picnic the following day. It’s no surprise to followers of this blog that food is a passion for me; it’s also art, and so it follows that I put my arty Nuit Blanche-esque, curious-arty energy into meeting chefs, sampling cuisine, and contemplating flavours, colours, textures and shapes. I wanted to engage in a person-to-person-to-soil-to-mouth-to-person connection -otherwise known as, yes, culture.

The Brickworks Picnic is all about creating awareness of local food issues and linking local food sources with chefs, and, in turn connecting that with consumers, who become, in the process, more involved in the entire symbiotic relationship between production and consumption. Intended as a benefit for Evergreen and Slow Food Toronto, the Picnic boasted an impressive array of beautiful food, gorgeous wines, and curious attendees. With 1300 people, the affair was anything but intimate, and yet, in meeting and shaking hands with such wonderful, talented people as Brad Livergant (of Veritas Local Fare), Ezra Title (of Chez Vous Dining), and Olivia Bolano (of All The Best), I felt an immediate connection with the arts of both cooking and growing. 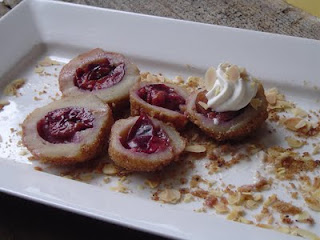 One of the trends I noticed at the picnic was the theme of Latin and South American-influenced dishes. There were empanadas, tongue dishes, salsas, and beef, all infused with the gorgeous, rich flavours of afar -and yet made with ingredients that were local. How wondrous. Same goes for the many Persian and Middle Eastern nibbles, including yummy stews, spreads, kabobs, and delectable Eastern European treats (including delicate plum dumplings, above, courtesy of Hungarian-born David Kokai of Loic Gourmet -Köszönöm, David!). Again, the incredible richness of my own home province was made clear to me through this magical melange of flavours. The riotous meeting of colour, texture, shape and flavour with each and every station I encountered made for a beautiful, memorable afternoon. 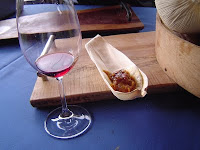 The time at the Brickworks Picnic was even more enhanced by the beverage education I received courtesy of the many wineries on-site for the event. Reps at each were truly friendly and happy to pair dishes being consumed -or ready to be consumed -with their offerings. Owing to a chilly, rainy afternoon, I stuck to warming red selections. My favourites included Malivoire, Rosehall Run, Frogpond Farm, and FlatRock Cellars. After that, I headed over to Merchants of Green Coffee, where I gleefully roasted coffee beans in a metal pan with a lid over a high gas flame (“Think of Jiffy Pop!” I was told). Following a thorough education in the terroir of coffee beans and the proper methods of brewing, I enjoyed a gorgeous, rich cup of the resulting brew. With a syrup-meets-molasses flavour countered by a nice bitter astringency, it was coffee that made Timmy’s look like the Naked Emperor it truly is. 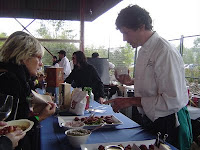 Merchants of Green Coffee was ideally situated between two of my favourite items at the Picnic: Jamie Kennedy‘s scrumptious bean pakoras and Oiko‘s warming, satisfying Orange Pekoe tea. With dampness abounding through the Brickworks’ environs, it was a relief to be afforded (make that saved by) so many cups of gorgeous, delicately-brewed tea, and a few crunchy-soft, flavourful (and deeply satisfying) bean pakoras with either roasted pureed eggplant or tomato raita toppings.

In watching the chefs and producers pack up as the Picnic drew to a close, I was reminded of the incredible work that goes into event such as these, and, in a wider sense, of the awesome work it takes to produce the very things we need to survive. And yet food has become too easy for us. It is something that surrounds us, but we continually take it for granted. 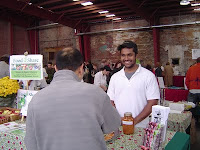 The Brickworks Picnic is a magical event for so many reasons, but one stands out in my mind, in retrospect: it balances the connecting, life-giving force of food with the more rooted reality of its centrality to culture. And that culture means growing, producing, sustaining, supporting and educating. It’s not about the quick fix anymore; it’s about the process. It’s not about impressing with a final product; it’s about educating for a more rewarding and sustainable journey. Everyone who took part in the Picnic seemed to have an inherent understanding of these realities.

Nuit Blanche? Whatever. I think I may have found where the real art in Toronto was this weekend. I was so artistically inspired, I went home and… cooked.