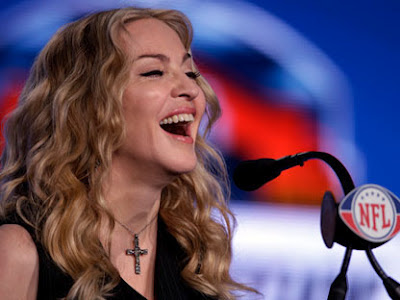 Today is the Super Bowl. Along with the inherent drama of watching grown men crash into each other as they engage in a kind of life-size version of a chess match and the fact that the New York Giants are involved (go Giants!), I’ll be watching because this year’s Halftime Show looks amazing. None other than Madonna herself is set to perform, along with LMFAO, Nicki Minaj and M.I.A.. Oh, and Cirque du Soleil are involved. If that isn’t entertainment with a capital “e,” I don’t know what is.

When the whispers of her appearance began circulating a few months ago, there were the predictable snickers and groans. What’s the Queen of Pop doing hopping around, glamorous and a-glitter, amidst the quarterbacks? But the Super Bowl isn’t strictly about sports, and you can’t get a more entertaining live performer than Madonna. I was schooled in this many years ago when I, full of cynicism and disliking both her image and canon, was dragged to her Girlie Show tour. Not being Catholic, I couldn’t understand her obsession over the religion (probably why Blond Ambition didn’t appeal to me, or much of her early work) but being in the very new, very scary-meets-cool world of university (ie artsy lectures, cute professors, pub nights, and my own car) meant I was interested in notions of female independence, and what that meant to the wider cultural world. Where did I fit in? Madonna’s hilariously arch, if brutally honest album Erotica, and her photography book Sex, did a lot in terms of helping me figure out that place. Sexual being? Thinking being? Feeling being? All of the above. Next. 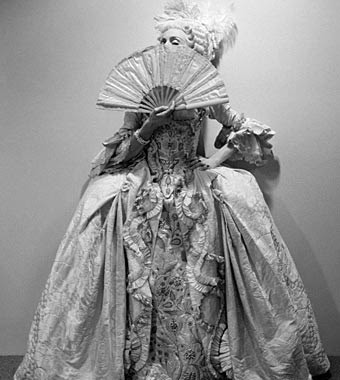 Through the years, I’ve developed an enormous amount of respect for Madonna. I love that she’s never been cowed by those snickers and groans, even as she fearlessly integrates so many different aspects of her interests and personality with such single-minded ferocity. Even when she showed us her (fantastically fit) naked body in Sex, paraded down a Gaultier runway topless, referenced Hindu imagery in dance numbers (or Judaism in music videos), Madonna never seems to give a fig about the outrage over her choices. It makes me wonder at her resilience, and about how she’s handling the mean-spirited criticism that’s cropped up the last few years around her face -more specifically, the work on her face. The entertainment industry hates, despises, loathes and abhors ageing. All the praise for Betty White conveniently cloaks the ugly if basic fact that she’d never be cast in a sexual role, that if you’re in the business and plan to age au naturel, you must be sweet, docile, and most of all, dumb (or be really, really good at playing dumb, and have a publicist who can work that angle relentlessly). You must be non-threatening and totally lovable. It goes without saying Madonna is none of these things, and has no interest in pursuing or cultivating those qualities.
The comments on Madonna’s face -and her ageing (she is fifty-three) -range from the catty to the downright nasty. Many have a nasty sexual vulgarity to them, and others are sniping and mean, implying there’s something awfully, terribly wrong with a successful woman over fifty climbing into bed with a twenty-something man. I find this kind of immaturity discouraging, but it’s also inevitable, the result of a relentlessly youth-oriented culture where only those under twenty-five are deemed sexually desirable. Annie Lennox pondered this dilemma, but Madonna is less interested in examination than in entertainment, and really, you can’t blame her. Like it or lump it, that entertainment demands an eternal esthetic of youthfulness. Her video for “Hollywood” from the 2003 album American Life underlined this awareness, offering a scary, freakish depiction of the demands of fame, and of a society where youth (especially female youth) is deemed more important than brains, ability, even talent.
She continues to play with our notions around entertainment, fantasy, and ageing in her latest video, “Gimme All Your Luvin’,” a cheeky little dance number with a pulsing electronic beat and the lady’s deceptively wispy vocals. (Don’t kid yourself: there’s steel behind that sound.) As Madonna, in full Bardot-esque makeup, shakes her big blonde mane (hilariously outlandish extensions or glamorous tresses? who cares?) or walks sideways along a wall with a team of faceless muscular football players supporting her, or walks coolly be-shaded with a pram, or has a (clearly thrilled) Nicki Minaj and (too-cool-for-school) M.I.A. bounce around as her cheerleaders, she isn’t trying to compete with the Gagas, the Britneys, the Katys, or any other would-be pop princesses. She doesn’t need to. She’s competing with the long-held ideas -ours -of how a famous person (famous woman, make that) should look, should move, should sound. The demand to “Act/Look your age!” are just plain boring, in the same vein as the accusations of her affecting an “accent” at the Golden Globes. “You’re from Detroit,” sniffed an online poster. Those attitudes don’t faze her. Like any good pop diva, Madonna seems dead embarrassed by her roots, and fully conscious of her vanity. Why should she act like “one of us” (or put on an act of faux-humility, as so, so many in Hollywood are so good at doing) when she clearly doesn’t move in our world anyway? Those offended by her lack of humility find her pretentious; those inspired by her steely-eyed confidence find her fascinating. There is no middle ground. 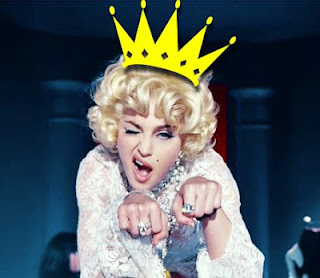 Still, Madonna wants to remind us: there’s an album, there’s a movie, expect a tour. This is how it’s done. She’s reminding potential viewers at tonight’s Super Bowl (the football fans, her fans, fans of pop culture itself) that she’s still a force. Does she need to? Yes. Amidst American Idol and America’s Got Talent and The Voice and Glee, Madonna is saying in her iron-hand-in-velvet-glove way: I was here first and I still do it better than all of you. Past this hardness lies the plain truth: she loves doing it – loves the performing, the entertaining, the singing-dancing-sashaying-hopping-bopping singy-songy madness that is pop. Don’t you?
Refusing to be defined (or limited) by her age, by her family, by her motherhood, by her charity efforts or even by her poptastic past, Madonna is defiantly, definitively present in the harsh here and nowness of 2012 Pop Music. While we applaud sixty-two year-old Bruce Springsteen’s latest opus with nary a word about his appearance, we snark over the face of a fifty-three year-old woman, ignoring the euphoric rush of joy her beats bring us, the heady fantasy that the artifice of the pop world presents. It isn’t fair in the real world. But the pop world isn’t the real world; like its namesake in the art world, it’s all about glamour, fantasy, superficiality, and a perpetual youth. We experience those things vicariously whenever we listen, causing a little dance across the kitchen or a tap of the fingers on the steering wheel or a wiggle in our office chairs. We become that young smooth being again, carefree, fierce, uninhibited, curious, and open to everything, investigating the limits (and dizzying non-limits) of our own potential and the joyous exhilaration of true independence, ever-mindful of what being a woman means, for good and bad and everything in-between. Maybe, just maybe, amidst the bleeps and bloops of that ditty, we could take a little holiday. It would be so nice.
Photo credits: Top – AP Photo, Matt Slocum; Middle – Herb Ritts; Vanity Fair collection from Madonnalicious; Bottom, still from “Gimme All Your Luvin'” music video (Interscope/Live Nation) with artwork from Sound Off Music blog.