In a previous post, I wrote about how a recent concert attempted to (and was largely successful at) making its listeners examine their relationship with time, space, and sound. Despite some complimentary words, I still don’t feel I did a very adequate job in explaining just how Sir George Benjamin and the Berlin Philharmonic achieved such a mighty thing. Try as I might (many hours were spent frowning and sighing), I simply could not put into words the uniquely special effect this past weekend’s concert had within such a specific context. My more recent experience Monday evening with the Ensemble intercontemporain at Berlin Musikfest underlined this futility of language to describe the aurally sublime, while also providing clues about getting thoughts to page and expressing that unique and sometimes-elusive how. Masterful, powerfully moving performances of works by Berg, Boulez, and most especially Grisey, showed me the way.

Maybe it’s more precise to say that Ensemble intercontemporain showed me the way; the French group brought a special flair and intense focus that only musicians in a full-time group dedicated to modern works can bring. Formed in 1976 by Pierre Boulez (with the support of then-Minister of Culture Michel Guy), the group, which employs 31 soloists full-time, is dedicated to the exploration of instrumental techniques and the developments of interdisciplinary projects, blending theater, film, dance, visual art, video, and music. As their official bio reminds us, new pieces are commissioned and performed on a regular basis, and they also have a strong commitment to music education. Resident of the Philharmonie de Paris, they take part in various worldwide festivals and have consistently won acclaim for their meaty, fascinating programming. 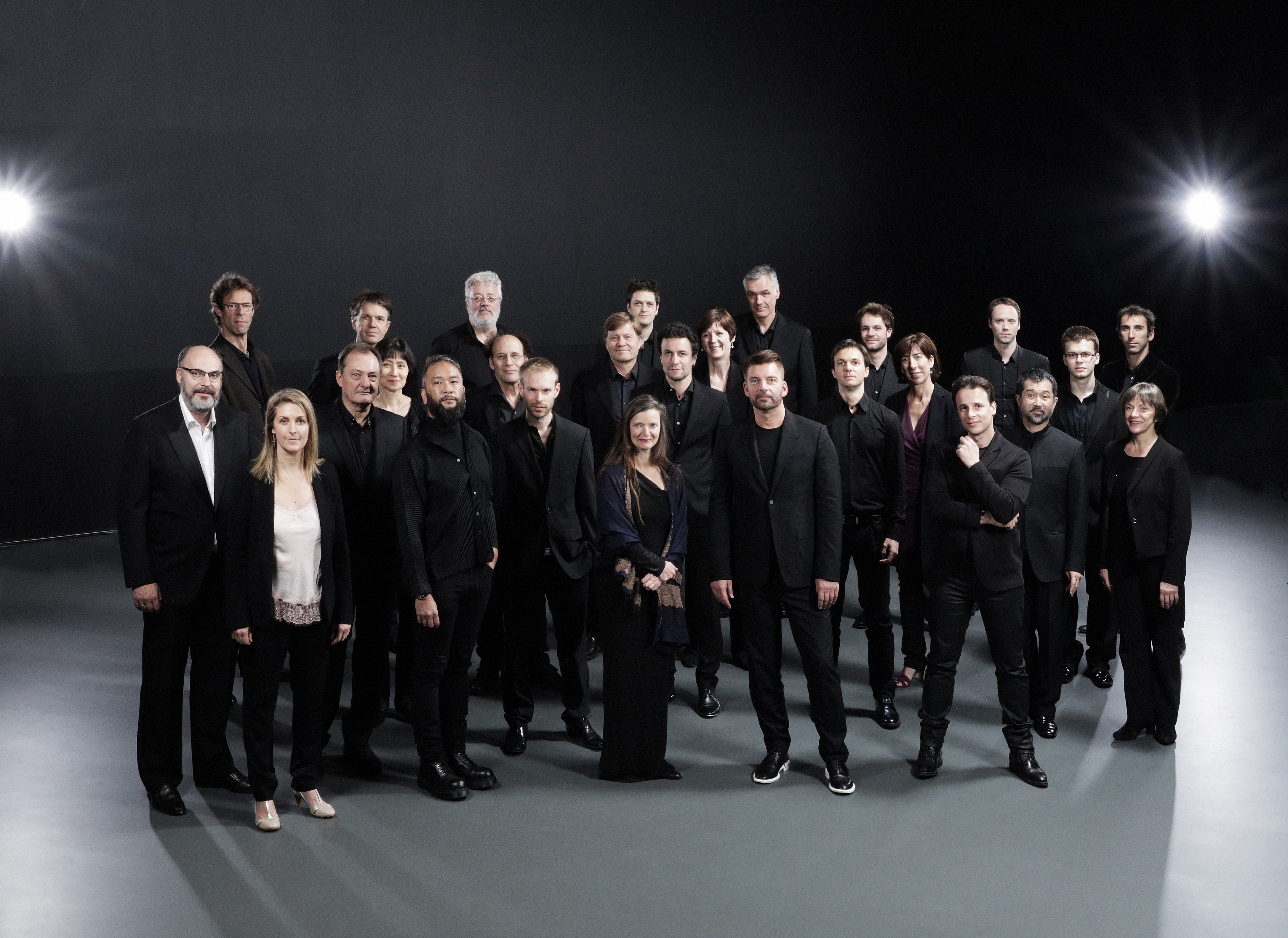 The ensemble’s palpable blend of exploration, experimentation, and education was melded with a deep poetry at the Boulez Hall in Berlin on Monday night, with the ten musicians (plus mezzo soprano Salomé Haller) in perfect alignment with conductor Matthias Pintscher. The first piece featured pianist Dimitri Vassilakis and clarinetist Martin Adámek in a wonderfully sensuous reading of Berg’s Four Pieces for Clarinet and Piano op. 5. Composed in 1913 , the work is notable for its brevity (it’s only about nine minutes in total), one which music writer Paul Griffiths’s excellent program notes remind us is “more characteristic of Webern”, another Schoenberg pupil known for composing expressive miniatures. The clear chemistry between the soloists here added to the inherent drama of the harmonies; while Vassilakis placed special emphasis on shaping lyrical piano lines, Adámek’s clarinet produced full, rounded tones, giving the piece a dreamy feel. It was a poetic performance packed with narrative intent, and a perfect introduction to the heart-and-head, forty-plus-minute opus of Gérard Grisey’s Vortex temporum I-III for Piano and five instruments, composed between 1994 and 1996.

It’s worth noting here that I think any listener who comes to the work of Grisey will have a very strong reaction to it; you can’t hear his work and remain indifferent. I first heard the French composer’s music as a teenager, and though I loved it, I was strongly discouraged from further exploration by an Italian-opera-loving mother who dismissed modern composition as “irritating noise that goes nowhere.” Moving past that pronouncement had its own set of challenges, but also a rich mountain of rewards; through regular (if sometimes covert) exposure, I began to listen to things in a far deeper way, finding it was music that went everywhere, most especially places I didn’t think I was smart enough to enter. (I still struggle with this feeling of utter intellectual ineptitude.) Shortly after my Grisey discovery (and directly related to it), I came across the work of Claude Vivier, which I had the privilege of writing about professionally earlier this year. A live presentation of the work of either composer is, for me, a thing apart; I never leave as quite the same person after such performances, and without speaking for them, I can only wonder if Grisey and Vivier might take some sort of delight in this.

Grisey’s Vortex temporum has an opening like circles in water, referencing what Griffiths smartly describes as a “little flurry” taken from the dawn scene of Ravel’s Daphnis et Chloe. Grisey was part of the spectral music movement (though he disliked the term), one which music writer Alex Ross describes in his monumental 2007 book The Rest Is Noise as “often just a step or two removed from the singing and shimmering textures of Debussy and Ravel.” The presentation on Monday night at the acoustically gorgeous Boulez Hall brought this relationship to the fore. String players were flanked, on either side, by woodwinds (flautist Sophie Cherrier and clarinetist Adámek), with piano behind them, affording those of us situated in a certain spot to catch tonal flurries as they underwent various progressions of renewal, reiteration, and revolution, each sound stretched and distended, a “rotary tuning par excellence,” to quote the composer himself. The experience of this “rotary” and its subsequent metamorphoses would be experienced differently for each member of the audience on Monday night; my own view allowed not only observation Vassilakis’s flying fingerwork, but to experience the sound of the strings — lilting, twisting, floating, stabbing — in unique and unusual ways. I kept wondering how people in the seats ringed above me were experiencing such ethereal sound; surely it had to be different and no less sublime? 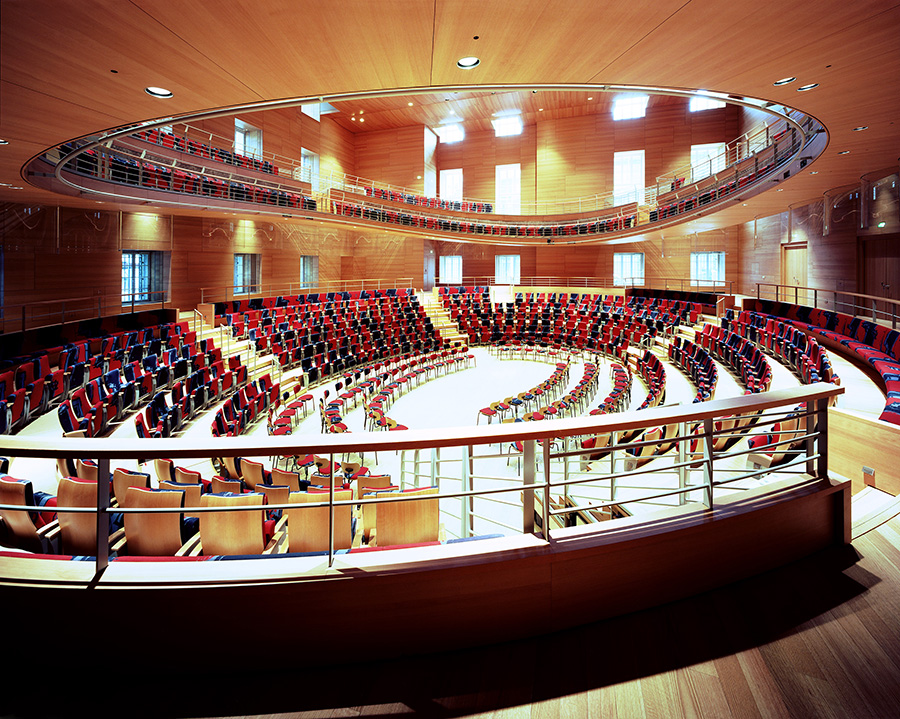 Between the musicians’ seating arrangement and the hall’s architecture (a long oval, and not dissimilar to a basketball court), perceptions and direct experience with the sounds being produced were being gradually if very clearly altered and moulded, highlighting the paradoxical nature of performance: individual and communal, personal and shared, epic and intimate. Echoes of ritual were also underlined, a connection with a wordless divine shaped by the shared and yet highly personalized experience set within formal parameters at once predictable (people blow into instruments or put bow to strings and sound is produced) and unpredictable (how do they blow in those instruments or touch that bow to strings?). Technique was utilized not merely in the service of imitation (for instance, the sawing of strings recalling the sounds in nature) but as part of exploration and meditation, which become twins in Grisey’s rich and spectral sound garden. A ravishingly virtuosic piano section (using purposefully detuned notes) became part of a larger continuum  of time and space, where even the turning of pages was part and parcel of an insistent and entirely holy sonic exploration. 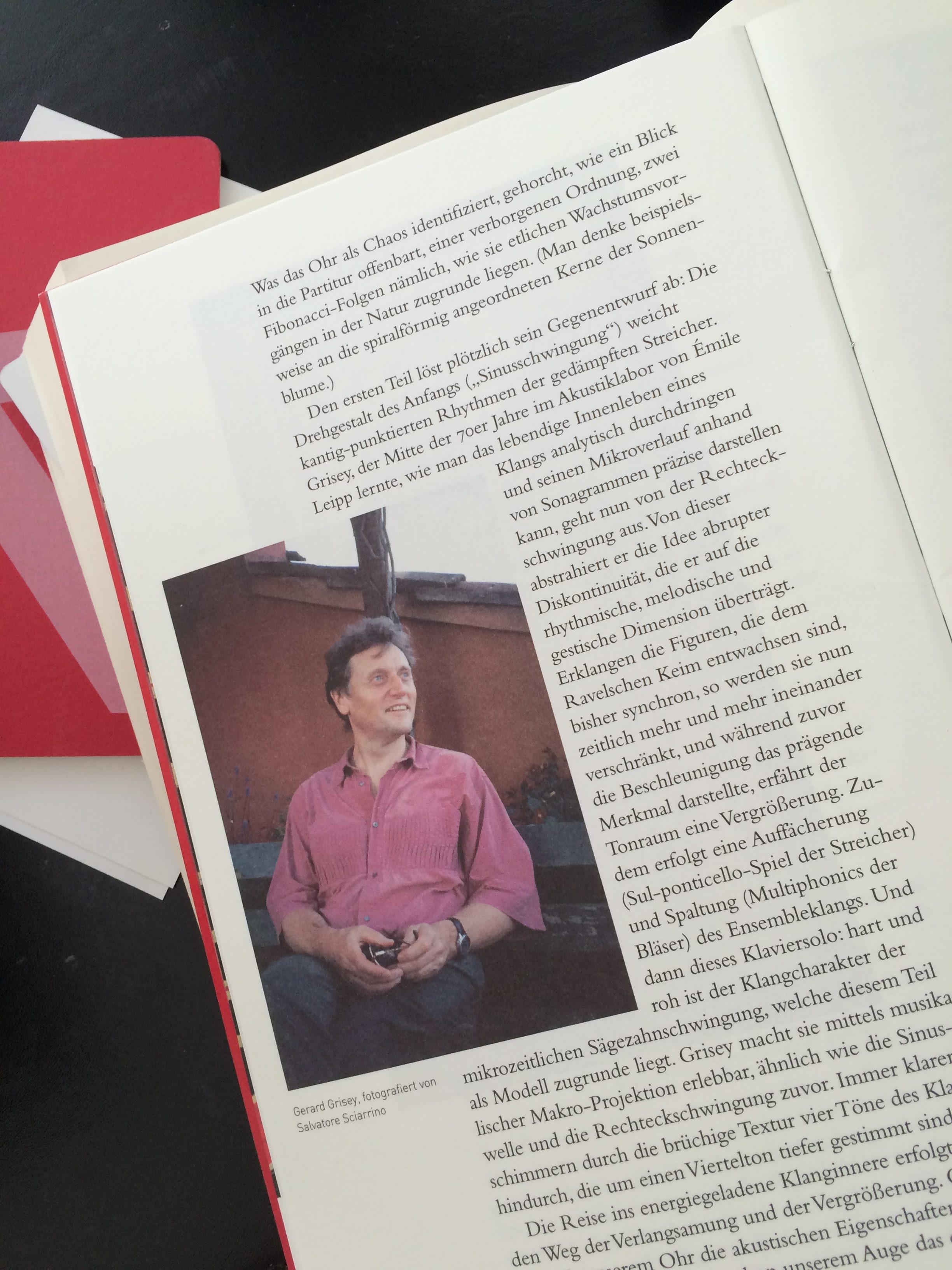 Program photo: mine. Grisey photo: Salvator Sciarrino. Please do not reproduce without permission.

Thus the slow fade of a chord melted cinematically away into a windswept bassline, and the slow repetition of notes transformed into a plodding foreboding storyline in and of itself. Ensemble intercontemporain have an inbuilt sense of drama, whereby they imbue theatrical knowing into every tiny moment and microtone. The act of listening becomes far more than passive; you are being asked (nay, demanded) to thread tone with three tempo levels which, as Griffiths writes, “for the composer represented human time (the time-sale of speech and breathing), the dilated time of whales, and the effervescent time of birds and insects.”

With sound at points becoming pure building blocks, Grisey challenges us: how do we hear this sound right now? Are we all hearing it the same? What images do we associate with this tone, or this, or… this? Ensemble intercontemporain forced its audience to ask these questions even as Pintscher moved the work invariably forwards with thrilling momentum, and into the third section, with its reprise of spiralling introductory chords, a hypnotizing sound with intricate waves of sound — sweeping, careful, then broad. Pintscher emphasized the relationship between strings, which provided a clear counterpoint to lyrical piano lines, which led to a  grandiose pseudo-finale, musically anticipated, but magically transformed and then distilled, like mists of raindrops, into a breathing single note. Thus the influence of Boulez’s Le Marteau sans maître  (The Hammer Without A Master), performed in the program’s second half, was made all the more clear, as Boulez, even in 1955 (when the piece was composed), was examining what Griffiths terms “the co-existence of spontaneity and system.” With Boulez, however, his work (scored for contralto and six instrumentalists, and  sets to the surrealist poetry of René Char) examines the relationships between psychological and technological, natural and mechanical, historical and inexplicable. This was the work that established the then-30-year-old composer’s international reputation, and, as my seatmate on Monday reminded me, shares unmistakable similarities (especially in its last movement) to John Cage’s Sixteen Dances, composed in 1950-51. Again, the spatial arrangement affected listener perceptions and experiences, though as the program notes, “Boulez’s logic was a logic in how the music was made, not in how it may be perceived: there his ideal was an opacity of scintillation and speed, an encounter with something too fluid and fast to be grasped.” Being behind the ensemble and close to the percussion section (with a vibraphone to my left and xylophone to my right) afforded an intimate experience with this opacity.

With a spritely opening and bouncy interplay of strings, flute, vibraphone and guitar, Pintscher emphasized the pulsating nature of the work, with both vibraphone and xylophone aggressive in their attacks. Haller’s luscious tone became a distant call, less intimate, more beckoning from afar, expressively swirling through Boulez’s syncopated lines. The lyrical woodwinds in the third movement were complemented and continued by jagged if bright percussion, which led directly into the prodding strings of the fourth movement. Overtones of Ravel’s gentle lyricism could be heard in the final section, though by then, heart and head were at bursting point.

This was an immensely moving concert that answered the how in my music-listening explorations, even if it inevitably left the imprint of a million more whys. Perhaps there are some questions that defy answers, and maybe, just maybe, that is just where music comes in.