Inner questions ran rampant during a performance of Die Frau ohne Schatten (The Woman Without a Shadow) at Staatsoper Berlin this past Sunday. There was only one gazelle depicted onstage, but a veritable herd presented themselves with every moment, each one leaping with questions: what do the unborn children represent? Why do they matter? Should they symbolize something else, and if so, what?

These are the questions at the heart of this opera, and in German director Claus Guth’s production, the questions became meditations. Strauss’s 1919 opera, with libretto by Hugo von Hofmannsthal, is a symbolic tale of two worlds haunted by absence – namely of that ultimate symbol of family, children, but also, it must be noted, of mothers; the “woman” of the title, the ethereal Empress (whose mother is entirely absent), seeks her “shadow” (symbolizing children) in the world of humans, specifically via a Dyer, Barak, and his Wife, otherwise her husband (The Emperor) will be turned to stone. Guth stages the piece as the dream of The Empress, a vision that awakens into the consciousness of a need for her own inner revolution —and evolution. In many ways the production is an operatic Rorschach test of sorts (with ink blots in the program too), tied to themes of culture, family, experience, lived circumstance and accumulated moments. What do we carry from our families into our adult lives? How do we reconcile being the “shadow” of another, and casting our own? What responsibility do we bear to one another, and, just as importantly, to ourselves and the expression of our needs? 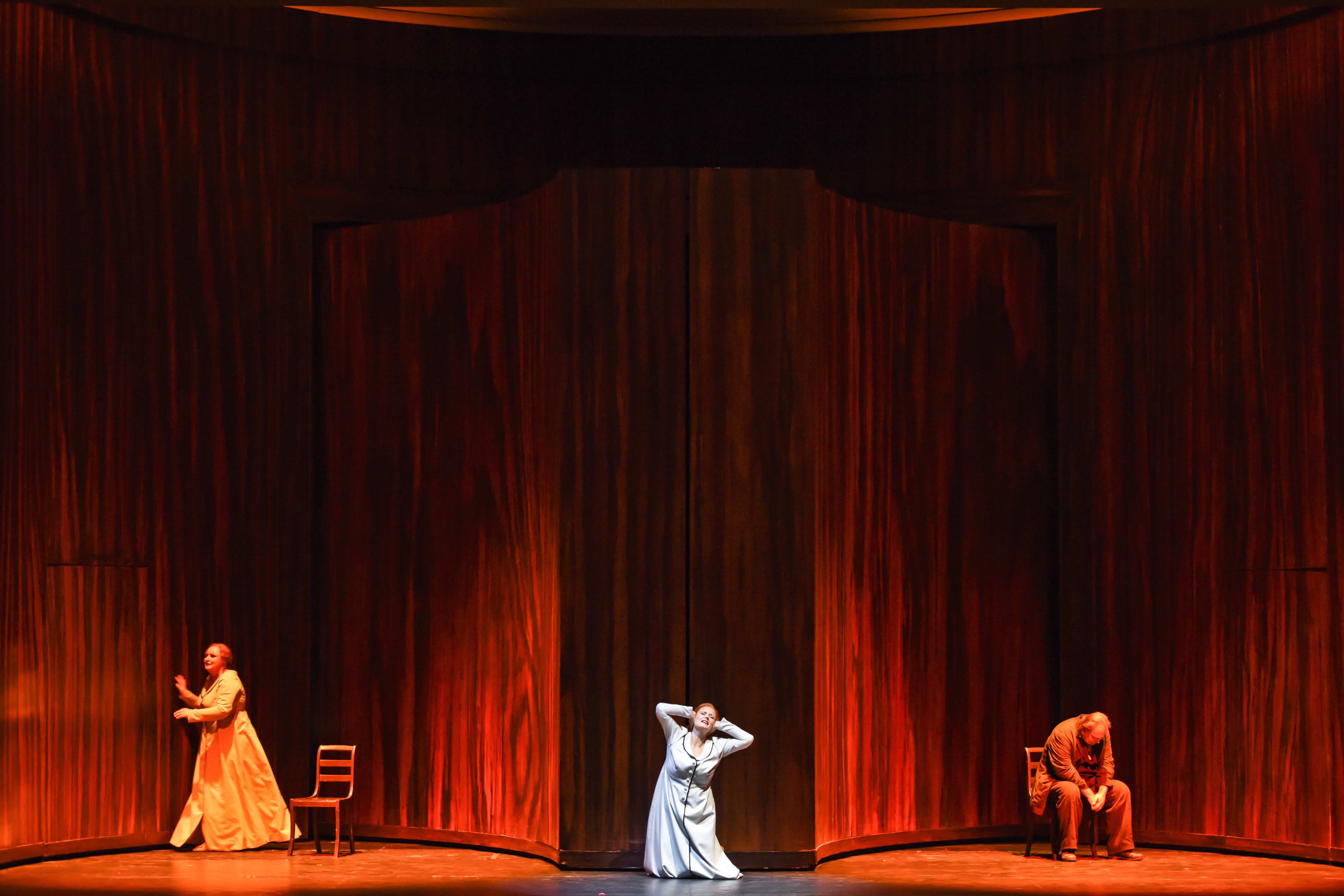 A co-production with Teatro Alla Scala di Milano (where it was presented in 2012) and the Royal Opera House Covent Garden (staged in 2014), the award-winning presentation, first presented in Berlin in April 2017, features fantastical elements and beautiful, Expressionist-style designs by Christian Schmidt. Instead of merely presenting pretty pictures, Guth wisely uses the assorted imagery to underline Frau‘s thematic resonance, allowing one to more clearly recognize and accept human fallibility, especially within the delicate arena of relationship.  The dynamics inherent those relationships is squarely the focus, with very little romanticizing despite Strauss’s rich score; it is a world fraught with  miscommunication, dysfunction, and deeply repressed fury. The length of the work (roughly four hours, with two intermissions), combined with a very intense musicality and highly allegorical narrative, means it can be a somewhat daunting work for newcomers, but the rewards, musically and otherwise, are immense. My premiere experience seeing Die Frau ohne Schatten live at the Met in 2013 marked a major turning point — creatively, emotionally, spiritually. It started what, in retrospect, I might term my own inner revolution (and evolution), still unfolding in leaps and bounds, and will always occupy a deeply personal place where art and life meet, though five years on, I still find myself swimming in the oceans of questions it inspires.

The role of offspring, the meaning of a missing “shadow,” the length and intensity of questing for one, and, as ever, the role family plays in that quest — these questions are all very much underlined in Guth’s smart and surprisingly resonant production. I write “surprisingly” because, while I enjoy much of the so-called “Regie” style of direction, it doesn’t always move me emotionally, though I recognize emotions don’t always have to come into play in order to have a good night at the opera. His production of Le nozze di Figaro (The Marriage of Figaro, premiered in Salzburg in 2006) had some interesting ideas to be sure, but left me cold, something I felt strange about considering the warmth of Mozart’s score. Barrie Kosky’s very unique take on Die Meistersinger von Nürnberg (premiered at Bayreuth last year) was hailed by many for its inventiveness, yet others vowed after seeing it that they would never again return to the annual Wagner festival. So while some deeply love Regie and think it is vital in moving opera forwards, others are convinced it is destroying the sense of wonder and fantasy that is part and parcel of opera. Die Frau ohne Schatten as realized here challenges the latter view entirely; it is very full of wonder, very much inspired by fairytales, and very beautiful to look at. But as I wrote earlier, that opulence is not for its own hollow sake; it isn’t simply pleasing costumes and sets. The design here serves a wider purpose, and in the world of Strauss and Hofmannsthal, it is to underline the deep divides between the archetypal figures of men and women, and the healing, regenerative power of love, a love that may or may not manifest itself (in the form of physical offspring) but is experienced within one’s self, and through another second, separate self. Recognizing and accepting the division of a second self, and working toward unity (and it is work, as the opera emphasizes) is a worthy endeavor, though it comes with great risk. Our hearts might freeze in the process (or turn to stone); we might use these roads of discovery for nefarious and selfish ends; we may never be entirely free of the shaping our parents gave us. As Guth notes in the program, Keikobad (the Empress’s father) “clings to his only child — through a prison of determination — and the child does not manage to look behind the mask of power or tear it down to recognize her own emotions.” Equally, the role of the Nurse here is given extra prominence, opening up experiences, to paraphrase Guth’s notes, which the Empress could never reach alone, and “in this way, the nurse gives her her shadow. (She) is a catalyst, a primal form of dynamic energy, beyond all moral standards.” Mezzo-soprano Michaela Schuster’s vivacious performance as The Nurse was a highly charismatic portrait of ever-tightening control; while the character is certainly fascinating (and is, in my view, given rather the short end of the stick in the end), her portrayal here doesn’t attempt to gloss over the questionable power dynamics between her and the opera’s other two principle female players. Guth frequently places her standing over, above, or at the edges of a scene, arms folded, chin up, hovering, a silent dance of control and manipulation; not for nothing does she sport black wings to match the coterie of similarly-winged, top-hat-wearing gents who wield power in mysterious if highly felt ways. 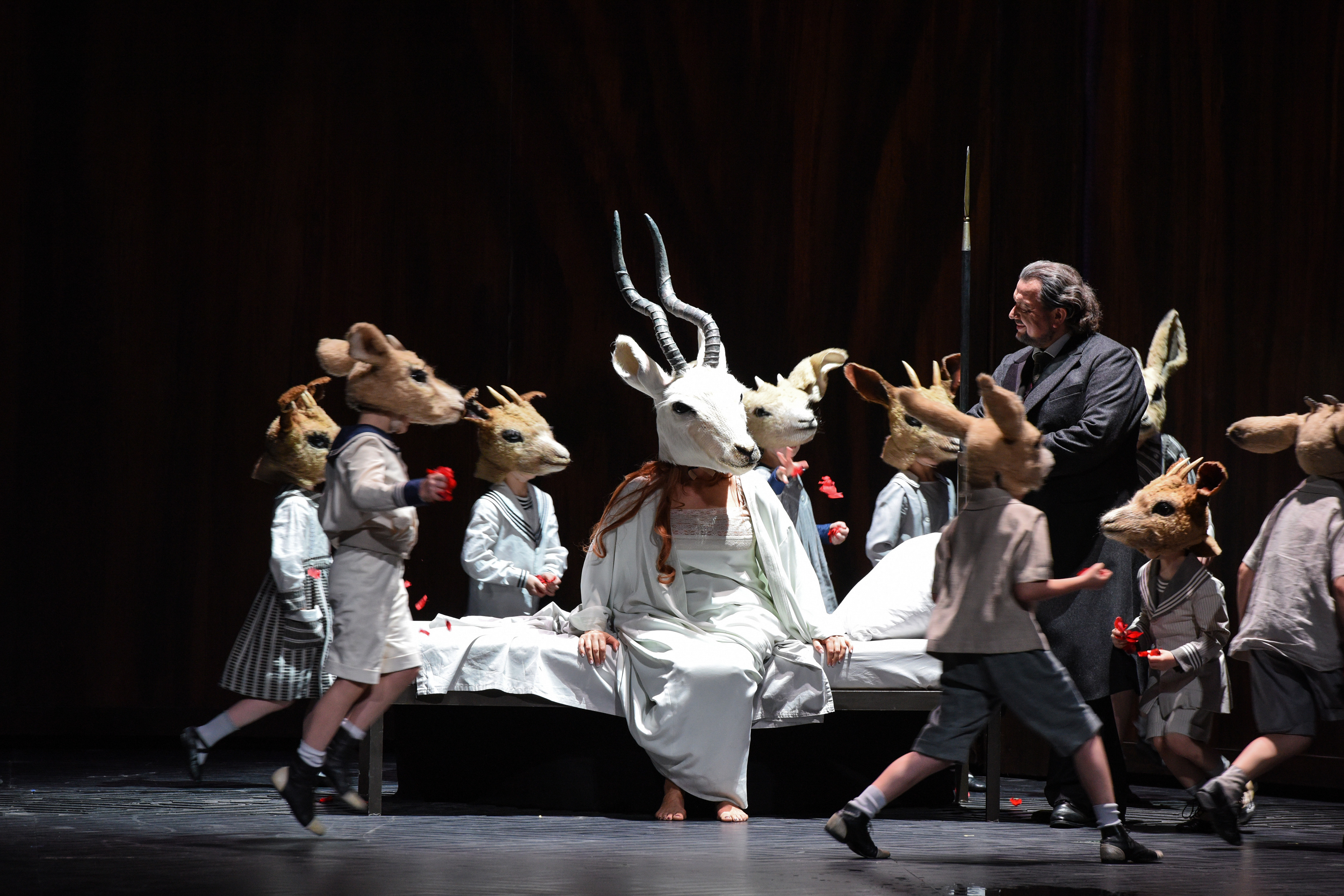 Schuster’s Nurse, Camilla Nylund’s Empress, and Elena Pankratova as Barak’s Wife, created a powerful holy trinity that was implied via creative direction and design choices, noticeably through the contrasting use of textures: rock, glass, wood; bone, fur, skin. There are many seen and unseen forces within the realm of human relating, as Guth points out, and many of them involve an experience of the sensual which is central to an experiencing the spiritual (and vice-versa). The two here go hand-in-hand, as they should, something clearly reflected in Strauss’s luscious score, with luxurious writing for strings, percussion, and what I call low-b(l)ow sounds (basses, horns). Baritone Michael Volle, as Barak, and tenor Simon O’Neill, as the Emperor, both represent flip sides of a similar spirit (and a similar physicality certainly helps drive this point home), an archetypal male presence torn in two, silent yet mute, inert yet active. Again, Guth’s staging emphasized the multifaceted layers of intimate relations, and the quest to find, form, and notably evolve an identity within a traditional framework that frequently demands the subsuming of individual needs. The curved set housing Barak and his Wife in separate pseudo-cells at one point was a simple, powerful image, deeply symbolic and highly memorable, like so many of the moments in this multilayered production. Toward the end of the opera, the Empress proclaims that “the love is in me, and it is enough,” before being surrounded by tiny gazelles, symbols of her own self as realized in the way in which she and her husband first met: she was the delicate creature he hunted, but who became trapped himself in a web of spindly uxoriousness, a web whose holes grew bigger with the absence of a perceived symbol of love (perhaps the ultimate symbol), children.

Guth’s placing the opera within the realm of dreams (and thus the subconscious) forces one to consider not only not only the holes in own lives but the shadows that occupy them. Might we turn to stone without recognizing, nay, embracing them? The questions are in us, as Guth reminds in this production, and they are enough.