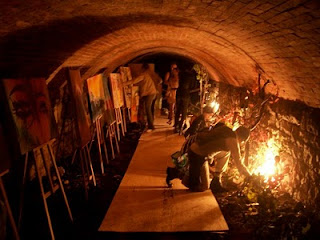 I feel like a kind of “us versus them” war is happening in Toronto right now -between people who lives in different regions, who engage in different social activities, who are interested in different things. Can’t we all just get along?

Look! Hear! is a monthly cultural event that happens in the city; its last one, November 30th, was held in the historic Distillery District. The next one happens tomorrow night, in the very-same, neato spot. In the words of the people organizing Look! Hear!, it aims to promote “some of the most exciting and up and coming artists and musicians Toronto has to offer, in the unique and raw space that is the Stirling Room Catacombs.” It closes with a live art auction at midnight.

Art? Catacombs? Auction? Cool! Or at least I think so; unfortunately I wasn’t able to attend November 30th but I definitely plan on following this group. I learned about it through artist Chris Pemberton, whom I interviewed as one of the co-founders of the immensely popular Art Battle. Chris is a great artist in his own right, as the photos here attest; they’re from his super summer exhibition at the Gladstone Hotel.

Now, there are a lot of people in the city who are taking the “us vs them” approach, specifically within the political sphere as a direct result of November’s mayoral race. Chris feels like one of those people who’s trying to break that barrier; would one group of people make it to the Gladstone Hotel, or Look! Hear! if they knew about it? Does that make the groups of people who do go to such venues and events x or y (or *gasp* z)? Should any of that matter when it comes to art? Questions worth debating at any time, in any place. My exchange with Chris demonstrates the heart of connection that lies within the kind of art I like best. 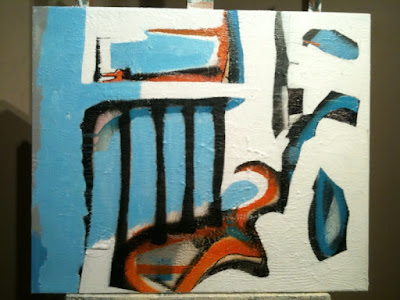 How does your work fit in with the other arts happening at Look! Hear! ?

Look Hear is a special event. Elements such as visual and sound arts are combined to bring an awareness to the space for the evening. I’ve done my best to offer paintings that represent my vision and passion, and let the curator design the rest. Should it fit? Most of the time, yes. Sometimes, if done with care, disjunction is beautiful too.

What does this kind of one-night event give you, as a working artist, in both the short and long-terms?

In the short term it gives the opportunity to share my ideas with a focused community. A special event like Look! Hear! brings people together to be a part of one night, and the enthusiasm becomes a tangible part of experience and the experience of my art. In the long term, it’s an opportunity to connect with the ideas of other people, and to inform my future work or creative process, which is my living process also.

Why do you think it’s a vital event for local artists in the city?

Every artistic element at Look! Hear! is being offered as a best effort in a beautiful venue, produced by a great team. It’s the type of event that supports and creates as it becomes real. I’ve worked with (producer/curator) Morgan Booth on other projects; she has a knack for success and is delightful to work with. I believe Morgan got the artists she wanted, Sarah Eagen and Andrew Dunn Clarke have really impressed me, it’s exciting to show work together.

How does it work with your role as a co-founder of Art Battle?

I’ve really felt a sense of community involvement since we started Art Battle. We’ve met so many passionate and innovative people, it’s inspiring me to maintain my own voice. There’s a lot of work in between shows, whether that’s an Art Battle or an exhibit, it’s important to maintain confidence and creativity. Working and communicating with people who share the same efforts and excitement is how it works. It’s a great fit. 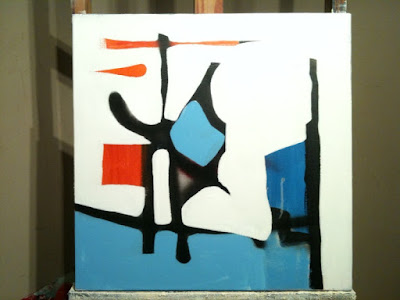 Your exhibit at the Gladstone had a lot of blues and oranges, & was very textural -how long did it take you to find your ‘voice’ artistically? How much is that an ongoing process?

It’s definitely an ongoing process, but if you are true to yourself and what you want to express, the work will always be true, although the voice changes tone over time. My paintings are the paintings that I want to live with -that is my guide.

How do you think events like Look! Hear! & Art Battle foster the culture of a city?

The culture of Toronto will be as rich as we make it. Events like Look Hear and Art Battle bring attention, experience and inspiration to the arts community and beyond. I believe culture is in constant motion, some things take longer to change, some times things shift quickly. The arts often tells us where we have been, sometimes tells us where we are, and occasionally where we are going. I hope that excitement and the connection of good people is where we are going. That’s the culture I want to be a part of. 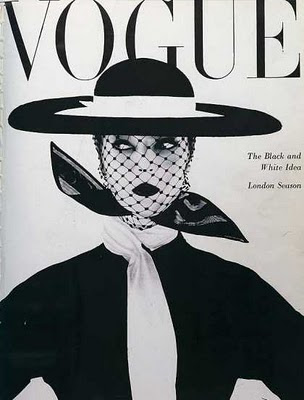 One of the many things I learned reading Patti Smith’s beautiful memoir Just Kids was that she loved Vogue Magazine as a child. Patti, the (I had supposed) anti-fashion poet? Trying to categorize her is impossible, and, I realize (as with many of the women I admire), that’s just how she likes it. Appearing on the cover of her first album in a man’s shirt (which she got, natch, from the Sally Anne) and rocking a strong, sexy, androgynous look ever since, Smith is one of those figures who stops me in my tracks on many levels, including how I think about fashion.

I had a conversation with a journalist-friend recently about the connections between culture and fashion, how one feeds into and is frequently informed by the other, but how frustrating it is that followers of each so rarely cross into other worlds. Save for the Gaga/Madonna/McQueen/Bjork/Warhol / Jacobs / Murakami types who a/ are super-rich b/ super well-known, and b/ don’t seem to care about categorization (in a more flamboyant if no less effective way than Patti), each world lives in a separate, distinct fifedom of fabulous, heady, arty, blissful ignorance. And that doesn’t seem right. Creative = Creative. And opportunities need to be created to foster that sense of the grandly creative and visionary -in any medium – and to properly to nurture and promote it. Enter Ukamaku.

My visit to the head office of the Canadian online fashion site inspired on various levels; partly because it was exciting to meet the people sewing/making the items -I consider them artists in their own right -and partly because, the way the items were displayed, it was, to my eyes, a mini-gallery of ideas and influences, the way any good exhibition is. And Ukamaku’s office itself is gallery-like: housed in a sprawling linked series of buildings featuring loft-like spaces with plenty of natural light, white-washed walls, and high ceilings and wood floors, it provided the perfect backdrop to the creations of people like Heidi Ackerman, Andy Hall, Paris Li, Breeyn McCarney, and David C. Wigley, among others.

I had the opportunity to exchange ideas around fashion and the founding of Ukamaku with a few of its principal players recently. It struck me, reading over their thoughts, that these ideas could just as well be applied to the art world -be it performance, visual arts, music -as to fashion. Let’s stop the lines and categories, says me. I think after reading this you might agree too.

Why did you start Ukamaku? 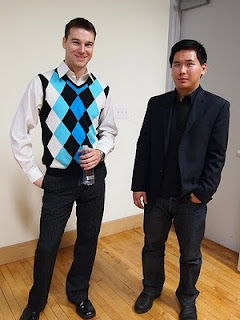 Ukamaku stemmed from our interest in creating an affordable eco-friendly brand. After looking at the costs involved with designing, manufacturing and marketing a fashion label, we decided that our talents and specialities aren’t enough to cover the different aspects involved. Talking to other designers gave us the same impression. We finally realized that instead of designing and manufacturing, we could help designers with their sales, and marketing their labels with a focus on e-commerce.

We (George and Chris) started Ukamaku after seeing a need within the fashion industry. We realized that although designers are good at fashion design, some require additional help with marketing – e-commerce in particular, due to the cost and training involved. Based on our individual interests in fashion and in e-commerce, we decided to start Ukamaku.

Who do you think it’s for?

We created Ukamaku with two different groups of people in mind. First, Ukamaku targets customers who like purchasing high quality goods at a price that reflects the quality. These customers are people who want unique items that aren’t mass produced (i.e. custom made clothing or jewelery). Customers who want to support Canadian designers are also part of this group.

We also created Ukamaku for independent Canadian designers. Canadian designers wanting to sell their items beyond their physical market boundaries. They want worldwide marketing for their items. Ukamaku gives them the opportunity to enter a new market at a faster pace and an affordable cost. Designers no longer need to spend time creating their own websites, online marketing and shipping. Ukamaku covers all of these for them.

How do you choose designs / designers to feature? How much is it about being ‘trendy’ vs being simply unique & well-made? 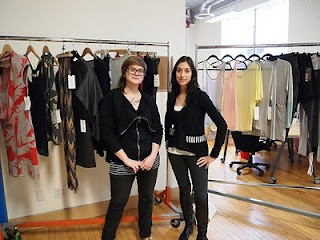 We first look at their quality and designs when choosing designers to showcase on our site. We try keeping a balance between trendy and simple fashion pieces to fulfill our customer’s needs. Many of our designers do not mass produce their products, allowing our customers to purchase unique fashion pieces with high quality materials. A designer with a good reputation in the industry is desired by Ukamaku. However, we believe that new emerging designers are equally as important. We will working alongside the new designers to help improve their reputation within the industry.

The term “locavore” is being thrown around a lot in Toronto food circles -how much do you think it can (or should) apply to fashion as well?

How much do you see ethical sourcing and production becoming the norm in Canadian fashion and overall in the fashion world?

There is a belief with the general public that Canada is environmentally friendly and an equal opportunity country. Many of our designers use environmentally friendly materials to produce their collections. We think they represent Canadian fashion very well. Being a Canadian company, we’ll continue supporting the designers in using eco-friendly materials for their collections. Hopefully one day, when people think Canadian fashion, they’ll think of trendy eco-friendly clothing. 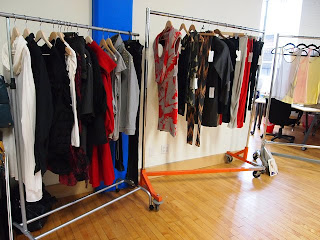 Where do you see Ukamaku in five years’ time?

Similar to the meaning of Ukamaku – “That’s It!” -we’d like to see Ukamaku as the main source of Canadian fashion. We want customers to find Canadian fashion items on our site, and designers finding their customers through us. We’d love to run more fashion related events, not only in Canada, but outside of Canada to showcase the many talented designers we have in Canada.