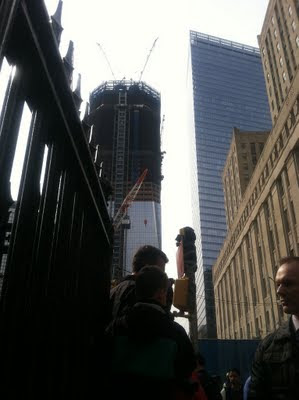 September 11th, 2001 is indelibly burned into my memory -and the memory of millions of others. We all remember where we were, and what we were doing.

It’s hard to try to describe that kind of event with any level of appropriate respect, let alone render it into a creative form that might make any kind of sense.
Toronto-based artist John Coburn didn’t set out to try to ‘make sense’ of what he saw during the awful weeks that followed that day. What he did do was sketch, in his identifiably detailed, careful way, life in and around Downtown Manhattan. His sketches became a book in 2002, Healing Hearts, and close to three thousand copies were distributed to families who’d lost loved ones in the Twin Towers. A related, feature-length documentary is in the works, too. It will aim to explore the many stories depicted in the book and feature interviews with those directly involved.
But to get a true sense of John’s work and the people involved in Healing Hearts, I highly advise taking a trip Downtown to see his work. A selection of originals are currently being display at Sciame Construction (at 14 Wall Street) through September 15th. With the 10-year anniversary of 9/11 on Sunday, the significance of John’s lovingly detailed images become all the more powerful, their depictions more, not less keen over time and memory.
Speaking with the artist was a moving experience; his love of New York City is obvious, and his grief over what he saw still vivid. We shared favorites restaurant spots, transit tips, and great places to sketch and write. Then we shared where we were on 9/11.
What’s your history with New York City?

I’ve been going down for the last thirty years. I first went at nine with my family, and I did my first little oil painting of the Statue of Liberty as soon as I got home. At 17, I went down with my art college and got hooked on it, so ever since, I’ve been drawing and working out of there. For anyone who spends time in New York, it always sits fondly in their mind -it’s always floating around.

How have you seen New York change?

I certainly cherish the fact that I was there in the late 1970s into the 80s, when it was still seriously had that edge -you know, the East Side and Times Square and all that – it had that strange edge, you really did have to stay on your toes. But it’s still good ole New York, that’s what I love about it: it’s this big churning machine of love and strangeness.

Explain how Healing Hearts came about.

It started from when I was inside St Paul’s Chapel [located across from what was the Twin Towers] and the chaplain looked down and saw me drawing. We chatted and he said, “I see people scribbling down addresses a lot -so cherish this. What’s going down on paper is picking up the vibe of love and care everyone’s reaching out with.” 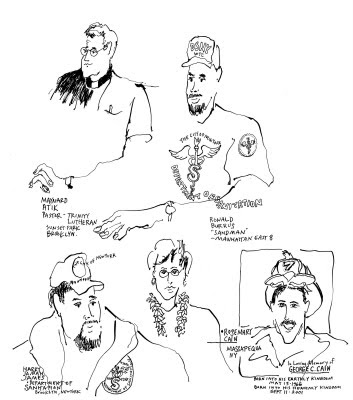 When you’re sitting there minute after minute, hour after hour, that life and spirit and energy somehow gets translated onto paper and it’s really the first time I ever thought of art as maybe… there is more meaning to a piece of art than an attractive picture on a wall. So when that chaplain said that, in a tiny way these drawings could deal with the theme of healing, he felt people could look at (them) and in their interpretive sense, get enough from their own imagination to see into what’s going on.

I met a woman named Rosemary Cain in the Salvation Army tent near Ground Zero. [Rosemary is the mother of FDNY fireman George Cain, who perished on 9/11.] I had these original drawings, which I showed her, and I said, “If I managed to put these into book, would you even want to receive it?” She pulled a photograph of her son out of her purse and handed it to me, saying, “John, if your little book can help people remember my son George, I think it’s worthwhile.” That one conversation was the only way this book ever happened.

How hard was it to complete?

It was so emotional for anybody to get through a day. When I was about to surrender, I ran into [artist] Bryan Chadwick, a Canadian guy who’s been in New York now for 30 years. [Bryan wrote the forward for Healing Hearts.] I showed him these drawings and said “Brian, people think we should try to do something, but how am I going to get this into book form?” We were in his Soho kitchen. “Put down your coffee, we’re going to Midtown,” he said to me.

We went up to Lexington and 42nd, to a boutique agency. The ad guys were in a boardroom, they saw the drawings and were tearing up and said, “This is how we’ll give back. We are honored to design this book.” They did a masterfully sensitive job. They created a little treasure. And it was printed for free, and sent by Fedex for free. It took 300 people to make it happen. 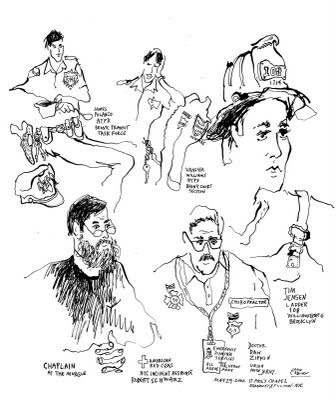 How did families react to your work?

I was invited to have this show in New York of these original drawings by Mary Fetchet, who is Founding Director of Voices Of September 11th. Mary and I met over course of year, after she lost her son Bradley, a 24 year-old who worked in finance. She started the foundation, and every year at the anniversary, she’s held events for families to get together share what they need to share.

There’s also a woman by the name of Selena Dack-Forsyth who lost her 39 year-old son Arron in the attacks. She told me, when 9/11 happened, she had called up a fire chief in the Ground Zero area, saying ‘I need boots. I need to go in and help find my son.’ The fire chief spent 40 minutes on the phone gently sharing with her this wasn’t possible to do.

A year-and-a-half later, when she received Healing Hearts, she sat down and read it cover to cover, and said, “Your book brought me to the site and gave me what I wanted to do that day. I was able to see and feel these moments inside St. Paul’s, and the people on the site.”

I also received many letters from families thanking us for doing it. A lot of them said, ‘The starkness of the pictures of airplanes in the building –we don’t need that -we need to see that people cared.’ My brother and I, who put the book together, heard from British families who lost relatives in 9/11. A lot of them had never been to New York, ever, and couldn’t afford to fly over, but all of a sudden, they flipped through a book that showed how much people cared. 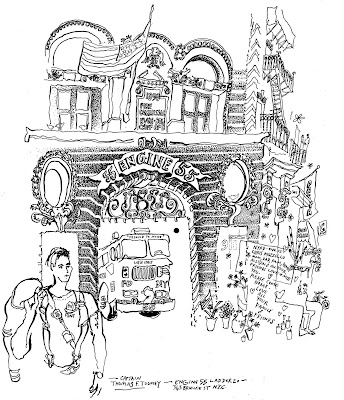 How has Healing Hearts changed the way you approach art?

It’s a reminder of the struggle to survive on this planet as an artist. When you sit and you have one mother tell you an ounce of how this might’ve heaped a bit, that right there makes thirty years of struggling make sense. It gives me the encouragement and the respect to continue on as an artist.

I went into a firehouse in Little Italy –Engine 55, on Broome Street. They lost five guys. I drew outside for a few hours, and the Captain came out, saw the drawings, and said, “These are really beautiful. Would you like to come in and draw a shrine to the five guys we lost?”

After that, they invited me in to have ravioli with them. I drew the guys around table. It was late, and they said, “Hey, you’re a ways from home -you are welcome to sleep upstairs.” It was just one journey after the other. As you finish one drawing, someone else is standing beside you saying, “Can you please come and see this?”

Pen to paper in New York City, 2011: what goes through your head?

If 9/11 had never happened, I would still be drawing, whether it’s cafe architecture or some tree in a park. I would still be doing this because I thrive on people and architecture, especially big cities and big vibes, but yes, with the history and what I’ve gone through doing Healing Hearts and meeting families and New Yorkers in general, it does make me again appreciate the fact that I am able to put some lines down on paper that might be appreciated next week, next century.

That’s what artists are about: writers, filmmakers, and artists like to put little treasures together and have them appreciated years from now. I’m just so grateful. 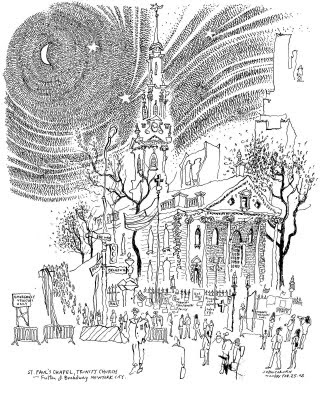