Balance is difficult -and I don’t just mean the standing-on-one-foot variety. Staying aware of reactions can be a trying endeavor -and balancing opposing reactions is an even greater challenge, particularly in the face of what I’d term Generally Bad Sh*t That Sometimes Happens. But it is wise to consider the Generally Bad from different viewpoints. So it was with a lot of courage and deep breathing that I managed to pull myself out of a black hole of feeling-left-out-ness lately. Recognizing the let-in-ness has been difficult, sure, because it’s meant a total re-adjustment of perception and attitude to outer circumstances; change is never comfortable, particularly as one gets older. But the adjustment, while strange, has also been a real blessing, thank in no small part to the truly big hearts of good friends, and more than a few incredible experiences that I’ve able to view as proof that Good Stuff Happens Too.

First of all, I recently had the opportunity to see an incredibly beautiful film, Amreeka, the first feature film by director/writer Cherien Dabis. It’s a really heartfelt look at the experiences of a mother and son from the West Bank who emigrate to the American Midwest. I interviewed Dabis about the work, and we discussed ideas around family, politics, and being an outsider. In a film where maudlin emotion easily could’ve trumped authenticity, Dabis touches all the right emotions, gently, while telling a compelling, involving story. Oh, and she told me she “hates” sentimentality. Hallelujah. None of her characters are victims, but rather, survivors, loving, living, and muddling their way through like the rest of us. Amreeka served as a wonderful reminder to me of the importance of relationships -to friends, family, work, and life itself.

Second good thing: the recent launch of AUX. The Canadian music station has been operating online for several months, but will be making its formal televised launch October 1st. I couldn’t help but think back to the early days of Muchmusic in watching chief AUX-ster Raja Khanna speak at the event Wednesday night. With a beguiling combination of sincere enthusiasm and music geek fondness, he excitedly outlined the station’s programming, and introduced its hosts, which included Explore Music‘s Alan Cross. 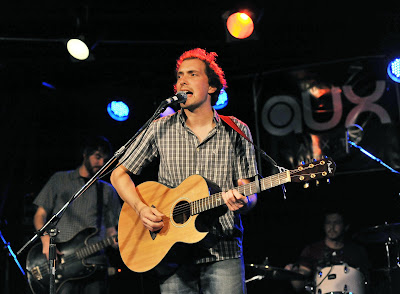 Amidst the total breakdown of the ways in which music is being created, shared, and consumed these days, it was refreshing to see such a great blend of faith, dedication and passion for artistry on display. No more “Pimp my Ride” or “Pimp My Bedroom” or any other inane nonsense that seems to occupy so many supposedly-cultural television stations on AUX -just music, examined and explored through various lenses, some fun, some serious, some playful, some challenging. Along with original programming, AUX is bringing Jools Holland’s totally excellent chat show to these shores (finally!) -proof-positive that Khanna and his team take music, and the artistry behind it, very seriously. In this world of media meltdown and of taking artists for granted, it’s refreshing to see there are still solid music lovers out there willing to bet they can build something beautiful. 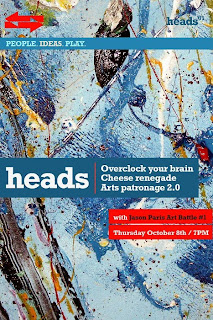 Within the vein of building -and by extension, artistry -I’m really happy to announce that I’m part of a team organizing a salon speaking series in Toronto called Heads. I was approached by my fellow Heads-ster (and outright genius, frankly) Simon a few week ago, and … lo and behold, we have speakers, a venue, and even an art battle (think Iron Chef, with paint in place of food). TED (and its Canadian counterpart, Idea City) has the market cornered in terms of brainy speaking engagements, sure, but we aim for Heads to be more inclusive, less formal, and more in the tradition of the great French salons of the 18th and 19th centuries, when people of all stripes and backgrounds gathered to yap about culturally interesting, relevant topics. Simon likes to say it’ll be “more think, less drink” -because as fun as the odd piss-up is, this isn’t aiming to be that, but rather, a solid gathering of people who want to discuss and debate ideas -in Heads’ first outing, those ideas will revolve around the validity (or not) of Canadian dairy laws, advances in neuroscience, and lo and behold, online arts patronage. All this for $5. I mean, really? This feels so right for right now, right here, and being involved in this project has yielded so many new blessings and inspirations, opening the way for me to think about my own pursuits in entirely new ways.

The glass is really half-full. It’s all in how you look at it -with head and heart equally, is, I suspect, the best approach.