As a child, I was exposed to a number of different sounds: opera, classic country, disco, pop-rock, jazz. And then there was Queen. I’ve often said their crazily loud soundtrack to Flash Gordon was my entrance into heavier sounds, and I don’t think it’s gauche to admit it. If it wasn’t for the “FLASH! AH-AHHHH!” I might not have ever gone on to the snarling sounds of punk or the clanging cacophony of metal. Hell, I may not have even enjoyed ballsy, loud blues. I don’t know how many times I made my mother sit through Flash Gordon, but … it was a lot. My friends and I used to literally dance in our seats to the music. Poor mum eventually relented and bought me the soundtrack to the movie, and from there I explored the Queen catalogue backwards and forwards.

Much-loved albums included A Night At the Opera and A Day At The Races (yes, I was a Marx brothers fan too, and immediately caught the vaudeville refence) and I remember borrowing a friend’s (vinyl) copy of News Of The World and listening to it ad nauseum. The cacophony from my bedroom provided good competition to the opera that blasted from the living room -especially on a Saturday afternoon.

Having been exposed to opera at an early age, I was particularly enchanted with Freddie Mercury‘s wide range and spine-tingling tone. He could move from soft and tender to aggressively sinister in a heartbeat. I loved that he did a duet with Monserrat Caballet; it only increased his cool-factor for me. What other rock figure would dare it? Opera was resoundingly uncool at the time, and yet Freddie openly embraced it. Even my mother became a Freddie fan.

I remember seeing clips of Queen live on television –all those hands clapping in unison! -and thinking, “He has something magical.” Freddie was unapologetically operatic in his approach and bearing; walking slowly across the stage at the end of Queen shows to the metal-ized stylings of God Save The Queen draped in velvet cape and crown was certainly among the campiest moments in rock, but it was also brilliant spectacle. In many ways now, looking back, Freddie revolutionized onstage rock presence. Standing and playing your instruments, shaking your hair, and looking only at your bandmates wasn’t enough to him; connecting with your audience and breaking down barriers of acceptability (especially in terms of gender and aesthetic expectations) came to matter deeply, and it shows, even now. Watching him on the telly or the computer monitor, it’s a presence you can feel.

Now, adoring a variety of genres and sounds, I still have to absolutely credit Queen and its magnetic, theatrical frontman for introducing me to the wonders of guitar rock as a child. Craig Pesco understands the magical presence of Freddie Mercury, too. The Australian-born performer is renowned worldwide for his onstage tribute to Freddie Mercury. Pesco seems to possess his own incredible sense of stage presence along with strong pipes to match. Currently on tour with It’s A Kinda Magic, and set to hit Toronto’s Massey Hall tomorrow night (March 19th), the performer knows he has big shoes to fill every time he steps onto the stage. “It’s on my shoulders to fulfill what they expect from Freddie,” he says. Scary? Yes. Thrilling? Probably.

I had the opportunity to ask Pesco about inspiration, singing, and the spooky kind of channeling that goes on with playing the enigmatic, operatic frontman born Farrokh Bulsara live, in front of cheering Queen fans. 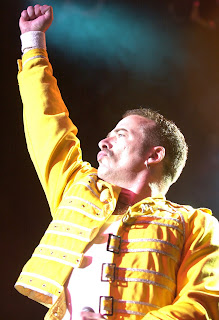 How old were you when you first heard Queen? Do you remember the song and your reactions?

The “Bohemian Rhapsody” video I was maybe 6 or 8. I thought Freddie was an exotic Asian woman.

How much of your own music and personality are you able to bring to It’s A Kinda Magic?

I have been a performer for many years prior to this role. My old friends say they don’t see Freddie onstage; they see me. In their eyes I have always been that type of performer, so I guess I’m in there somewhere, though I try to stay true to Freddie.

How much of performing as Freddie is theatre? Do you sometimes feel like you’re ‘channeling’ him, or is it a mask you put away at the end of the day?

I think it’s a little of both, it certainly has a spiritual aspect to it and I forget who I am most of the time. For good or bad, I enjoy being in a dream like state up there. It’s like I’m watching a video of Freddie somewhere in my head, maybe like an out-of-body experience, I guess.

What do you think accounts for Queen’s enduring popularity?

Great songs and production! Also, a revolutionary concert production and a genius frontman who was not afraid to express himself however he felt.

What is your favourite Queen song to perform? Which Queen song have you not performed but you’d like to do?

I enjoy the heavier material. I would love to do “It’s Late” or “Millionaire Waltz”. I love the album tracks much more than the hits.