Lying in bed mid-morning this sunny Sunday, two thoughts presented themselves: ‘why can’t I go back to sleep?‘ and ‘what the heck is the name of that French-Canadian electro band from the 1980s?‘ Several cups of Bewleys, a plateful of waffles, a scan of the weekend paper and a load of laundry later, I set myself the task of answering the latter question (there is no answer to the former, other than the mysterious wonders of the human body). A bit of snooping, and… voila. I thought of The Box in relation to Gorillaz‘s new single, “Stylo” -there’s that same pulsating beat, that bloopy-bleepy bass, that high-ish, scarily monotone vocal. It’s creepy and compelling all at once.

I have no way of knowing if Damon Albarn et al have heard The Box’s 1980s hit “L’Affaire Dumoutier (Say To Me)“, but I do hear a definition connection between the two:

There’s always been a European sensibility to what Gorillaz do, much in the same way with what Quebecois artists were doing twenty years ago. That spirit of experimentation, of pushing pre-conceived norms, of being… just plain different, feels weirdly duplicated and canned these days; ideas of what constitutes “authentic” within the musical realm are hazy at best. 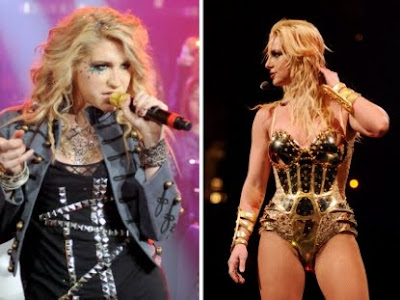 I type this after an evening of half-observing the Twitter insults flying around over Ke$ha’s appearance on Saturday Night Live between sips of red wine and bites of calamari in a busy trattoria; I couldn’t help but feel compelled to observe the nastiness being hurled at the “garbage chic” singer/songwriter, and feel, at least, a bit sorry for her. Online, the running theme was that she ripped off Lady Gaga, in both sound and appearance. People know -or like to think they know -a fake when they spot it, and yet more often than not, the same fickle public openly applauds pre-conceived, packaged musical figures who’ve been primed to be the sassy “rebel” while simultaneously keeping a well-groomed public persona that has nothing to do with music and everything to do with celebrity. What’s original? What’s a rip-off? Is being obvious a hugely bad thing -especially when put beside artists that look (and, oh yeah, sound) like they’ve dropped out of a machine? I’d argue the online culture has blurred our ideas of what constitutes originality, in both good and bad ways. To borrow Warhol’s phrase, people want their fifteen minutes -but with fifteen different costume changes and a team of publicists, stylists, and hangers-on, ever singing the same damn over-manufactured, cutesy-wootsy, auto-tuned song. Some of us notice. 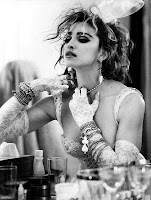 Incidentally, I remember Madonna’s break-out in the 80s, and her getting the tired old “trashy” / “slut” / “ripoff” insults hurled her way, too. Ergo, there’s something about all the hatred towards Ke$ha that makes her way more interesting to me. Fabulously shabby, awkwardly un-hip, and defiantly dirty, the young singer has less of the Gaga glam that so lends Ms. Germanotta to MAC campaigns and Philip Treacy hats, and more of the desperately young, ambitiously sexy vibe of Madonna’s live performance of “Like A Virgin” from the 1984 MTV Awards. She’s out of tune entirely, gets tangled in the wads of white netting and emanates such a vibe of delicious trashiness, you’ll want to take a shower at the end of it -but you can’t take your eyes off of her, either.

Then again, maybe I’m being an old fart. I do think it’s useful to go back and draw threads from past to present, however obvious, or un-obvious, that may be. Finding an original voice takes time, patience, and most of all, living (especially living away from the nefariously homogenizing forces of the record industry). It makes separating, mixing, kneading, and baking the authentic from the inauthentic that much more rewarding. Imagine a meal in a box; now imagine a meal in the oven. Originality is a tiresome old notion to throw around in the 21st century, but it behooves us to think about it, and how we approach our music, and what we expect from its performers, more carefully. Everything really is everything, as Lauryn Hill sang.

Herewith, a probable inspiration for The Box and Gorillaz -and probably everyone else, too: