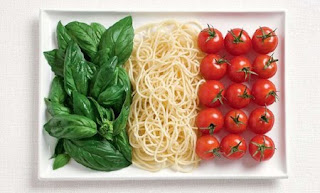 I Eat Your Country (With Relish): In honor of the Sydney International Food Festival last fall, participating countries contributed flags made from the respective countries’ best-known foods. It’s simple but it’s nifty. Depending on which flag you like, I guarantee you’ll get hungry just looking. I especially like the French one myself. No prizes for guessing what constitutes its tricolour. Nationalism has never been so delicious.

Sweet… Song: Jonas Kaufmann is an opera singer. A really good one. Writer Olivia Giovetti describes his voice as “dark chocolate.” Mmmm. Also, he’s gorgeous. Mmmm. He has two new CDs out this week, and he’s set to perform as Don Jose in Carmen this spring at The Met. Aside from being keen to get down to New York, I want to see this production (easily the 30-something-ish production of Carmen I will have sat through), to stare at his pleasing Teutonic mug, sigh over Bizet’s beautiful score, and think of… chocolate.

Easel Ladies: Together with Virginia’s springtime celebration of women in the arts (called Minds Wide Open) comes Women of the Chrysler: A 400-Year Celebration of the Arts, which the Chrysler Museum has curated from their permanent collection. Featuring artists as wide afield as Harriet Cany Peale, Mary Cassatt, Käthe Kollwitz, and Dorothea Lange, to Diane Arbus, Louise Nevelson, Jaune Quick-to-See Smith and Cappy Thompson, this is one exhibit that is part history lesson, part celebration, all artistry.

I Love This Band: Preachers Son is a Dublin-based trio with a grit-glam sound channeling equal parts David Bowie (especially in his Berlin phase), Nick Cave, Johnny Cash, and the Legendary Shack-Shakers. They’ve created a unique, hard-rock sound that positively drips with drama and raw musicality. I can’t stop playing them. Fingers crossed they’ll be here for North by Northeast.

Viva La Eno: In this interview from March 2009, the artist/producer/all-around genius expounds on his processes of composition, production, and collaboration. He offers some fantastic insights into his past with Roxy Music as well as his present, working with bands like U2 and Coldplay. He also discusses the beauty of simplicity, citing an early viewing of a Mondrian painting as a formative moment in his creative development. Oh, and he has this to say about fans of bands:

I don’t like fans very much to be honest. Of course I like people enjoying my music and I quite like being admired for having some good ideas, but the anorak-y type of fan is a rather frightening object of humanity, because you think, “Please get a life; don’t have mine.”

Fountain of Woot: Marcel Duchampe’s 1917 exhibition called “Fountain” made a splash upon its exhibition, but a surfeit of duplicates threaten to tinkle all over the famed artist’s legacy… or possibly enhance it. As More Intelligent Life notes, Duchamp was one “who had painted moustaches on postcards of the Mona Lisa” and he “understood the power of reproductions to render a work iconic and consolidate an artist’s international reputation.” In this high-tech remix era where questions of originality are both critical and codswallop, and borrowing/stealing for recreation is plus normale, the issues Duchamp raised nearly a century ago have particular currency and potency.

Welcome to Detroit: Photographer Andrew Hinderaker went to Detroit -and took a lot of pictures. His work is a document of an area hit hard by the recession; empty, yawning streets, skeletal buildings, hard lights dominate many shots, but interesting, he also finds the beauty in the desolation, turning his subject (a microcosm of America itself) into a kind of victory over dark days and damning forces.

Tune in Friday: I’m going back to radio broadcasting starting April 9th, 9:30amET. Whether you’re an A&E afficionado, or just plain want to hear what my voice sounds like, tune in. Please?