“You go into a bit of a vortex and then you hear the words, ‘Jeff Bridges‘… “

That’s Colin Firth talking about what goes through his mind this awards season.

The British actor didn’t have to worry about Bridges tonight, though; he won Best Actor at the BAFTA Awards for his stunning performance in A Single Man.

I saw Tom Ford‘s film (based on a work by Christopher Isherwood) just this afternoon, and I am not sure I can properly articulate its beauty in any meaningful way. The film revolves around George Falconer, a professor in 1962 Los Angeles, who has recently lost his partner. Ford features several long, meditative shots of Firth, whether he’s looking for something for breakfast, sitting in his car, sorting through his bank box, or remembering his times spent with Jim (Matthew Goode). George’s life is both bereft of life and hefty with love, as his interactions with his lifelong friend Charlotte (Julianne Moore) and new friend Kenny (Nicholas Hoult) demonstrate. With keen use of colour, a gorgeous sense of framing, and a flair for considered shading, Ford nicely balances the silence and the symphony, both literal and figurative. It’s an immense achievement that silently yet masterfully articulates the life of one man in quietly desperate circumstances.

Along with being a play on ideas of the single and solitary, the film is a meditation on aging. I was especially moved by the lingering close-ups of Firth’s expressive, natural face. No smooth-faced, muscled-up, botoxed Hollywood star, one could see the rough bumps and expression lines a late forty-something man has, and has righteously earned. In no way do those wrinkles detract from Firth’s physical attributes; in fact, they add to his attractiveness. In other words, never mind the Darcys -here’s the real thing. A Single Man gives us an honest portrait of an outsider -talented, articulate, even playful -who feels rejected by a world that deems him undesirable and considers his contributions worthless. This is deeply related to the speech George delivers on fear to a classroom full of pie-eyed students. The relationship between fear and love is profound in any arena, and Ford nicely, effectively explores this connection, using, again, the palette of Firth’s incredible face. Such an achievement is rendered with the deftest of strokes, and the most subtle arrangement of light, colour, shape and shadow balancing with the close, hard facial shots. It’s not hard to identify Ford’s design background here, but his translation of it into a cinematic expression is nothing short of astonishing for its emotional resonance.

Walking amidst a street fair after the film, I was still haunted by the director’s beautiful vision, the actor’s aged face, the silence, the noise, the light and the shadows. Questions around youth, age, beauty, and love, and one’s perceived “worthiness” of each whispered about like midnight waves lapping at cold toes. Some things are, perhaps, best left unanswered, but the shining faces on the street -of young and old alike -enjoying the sunny day, and the simple joy of living, was a fitting counterpart, and a beautiful reminder of the very things Isherwood wrote of. Viva love. Viva life.

“I had my share, I drank my fill / And even though I’m satisfied, I’m hungry still / to see what’s down another road, beyond a hill / and do it all again…”

Next month will mark ten years since I’ve moved back to Canada.

Prior to that, I’d been living abroad, first in Ireland, then England, for close to two years. I learned so much during my time away, though in the midst of it, I couldn’t shake the feeling of being an outsider. In my youth, I truly fit the role of a misfit; I was the girl who’d skip class to go to the art gallery or, in elementary school, intentionally forget gym clothes to read Kerouac. But being in a completely new environment presented a new, much more frightening challenge. It was uppermost in my mind to fit in as much as possible with my new chosen countries and their inhabitants, while at the same time maintaining my individuality and identity (which was a very shifting, transforming thing). Keeping balanced amidst those cataclysmic changes was a high wire act I didn’t always perform successfully. Never has Dickens’ “best of times / worst of times” dialectic been more obviously manifest in my life than it was when I lived abroad. 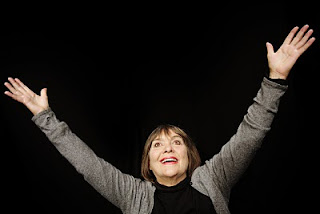 So it was with a lot of fascination that I read about Canadian theatre artist Maja Ardal‘s work You Fancy Yourself, a classic fish-out-of-water tale. In the one-woman show, award-winning Ardal uses pieces from her own background as a transplanted Icelandic native growing up in 1950s Edinburgh to tell the tale of friends new and old, memories made and forgotten. I had the opportunity to exchange some ideas around the ‘outsider’ label with her, and to glean her thoughts around an aspect of theatre that’s always fascinated me: the solo show.

Where did the idea for You Fancy Yourself originate? How much of it is personal?
I loved to dress up when I was a kid. My Mum had a trunk full of fabulous forties gowns and blouses. When I put those clothes on, I imagined myself to be completely transformed-as if I was the most glamorous film star in Hollywood. One day, I wore an amazing puffy frilly “off the shoulder” blouse to school, thinking that all the girls in the playground would worship and adore me. Instead, I was ridiculed, and pushed around by a mob of girls who all shouted “Who do you think you are!? YOU FANCY YOURSELF!!“

About six years ago I started to think about those awful childhood moments that throw the cold light of day onto our dreams. I began to write story/poems about other children I remembered from my childhood, and the public humiliations they went through at the hands of bullies. I decided to try turning those poems into a play. The world of the play came alive around Elsa, a little Icelandic girl who has to learn how to fit into the rough world of the Edinburgh playground. As I wrote the play I compressed it all into fictional scenes. When I performed all the characters, I knew I’d made the right choice, as it is truly a joy to perform them all.

What are the best and worst things about doing a one-woman show?
The best things about doing a one person show are that I don’t have to compromise to other cast members when we have a gig or a tour, I am free to invent new things on the spur of the moment and I get really fit because the show is so physical! Also, I have an intimate relationship with the audience. I can’t hide from them and they can’t hide from me, and they start to realise how much I need them to play with me, and frankly their surprise and delight feeds me with joy and energy. 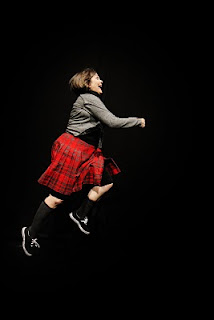 The worst things are that it’s lonely in the dressing room -it’s lonely when I’m on tour, like in Prince Edward Island and Salt Spring, or Edinburgh, and have no one to share the sights with when I have the flu, and have to pretend to myself that I don’t, and just do the show because there’s no understudy. I did a run of the show in Hamilton starting with the flu. The bizarre thing is that I would always start to feel better when the adrenaline kicked in, then the next day it would all have to begin gain.

What do you hope audiences come away with?
Having done so many shows and received so many written and verbal responses, I think I can safely say that people come away feeling rewarded, that they were at a play that spoke to them so personally while at the same time making them laugh wildly-and shed the odd tear. The play seems to remind us that when we try too hard to belong we must be careful not to betray those we love.

You Fancy Yourself runs at Toronto’s Theatre Passe Muraille until January 23rd.