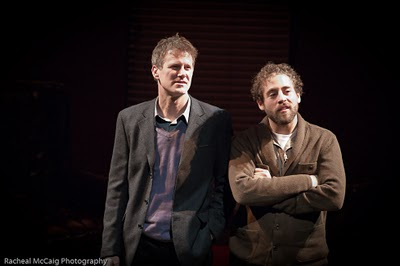 So many things can drive friends apart: time, maturity, distance. Sometimes people grow apart gradually; other times, they are driven apart, taking refuge in their respective intransigent poles. Either way, it’s always sad. Canadian playwright Michael Nathanson has dramatized this split with his 2007 play, Talk, currently running in Toronto at the St. Lawrence Centre for the Arts. The production is a thoughtful, insightful piece of theatre that is deceptive for its naturalistic style and chatty structure. Produced by the Harold Green Jewish Theatre Company, the work is both confrontational (in that you’ll be forced to re-examine your own beliefs) and inspirational (in so far as you may want to call up long-lost friends). In Nathanson’s work, it’s not so much circumstance but politics that drives a wedge between two men who’ve been friends for 18 years. A simple -or not-so-simple, depending on your viewpoint –word used by Gordon’s new girlfriend causes a rift that leads to a wide, seemingly insurmountable chasm. The varying reactions of the pair to the word’s use proves to be the unraveling of the friendship. Was it inevitable? Was the political situation of the Middle East the sleeping leviathan lying between the pair, awaiting its summons in the form of a (never-seen) woman?

Nathanson doesn’t answer these questions, but he does give us clues. Talk, for all its talking, is not merely a tough examination of Mid-East politics; it’s a close exploration of the ebbs and tides of the relationship between two men, of ways hidden currents move and shift through time and experience. The playwright muses on what might’ve occurred had Josh, the Jewish character, chosen not to express his concerns when he was able to, at the pair’s initial reuniting following Gordon introducing his lady love. As we see in small, simple gestures, even if Josh had decided to hold his tongue, the friendship would still come apart, albeit in a more pernicious, painfully slow way.

Director Ted Dykstra inherently understands the heart that beats behind the angry, passionate political arguments; it’s a heart that the two men share, but which is destined to crack in two. With carefully considered blocking, a simple, elegant design and dramatic, clear lighting (both by Steve Lucas), the characters’ various feelings and reactions (expressed both inwardly and outwardly) are expressed as the two try to hammer out common ground while, on some level, knowingly smashing the continental coastlines of difference. Performers Kevin Bundy (as Gordon) and Michael Rubenfeld (as Josh) give genuinely passionate, moving performances as the two longtime buddies whose conflicts are both personal and political in nature. 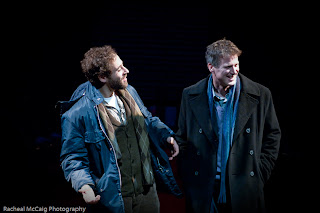 Nathanson, who is also a producer with the Winnipeg Jewish Theatre Company, spoke about the writing of the play in the post-performance discussion I attended, and while he shied away from admitting the play is based on actual experience, he did say its events were inspired by the fall-out he and a friend had over an email that he’d been sent after 9/11. The incident forced him to consider what comes to be a major thematic motif of the play: “At what point, as a Jew, do I say, ‘You can’t do this’?” The choice that faces Josh -to speak or not to speak -is one that haunts the entire work, and it gives Talk a certain bittersweet flavor that’s similarly reflected in the choice to leave Gordon’s new girlfriend unseen. This technique renders the character (and her perceived influence over Gordon) all the more powerful, if equally mysterious; how much is Josh’s outrage political, and how much is pure jealousy? As Nathanson reminded us in the discussion, director Dykstra approached the work as a love story, which it unquestionably is: the deep vein of friendship that binds, however, also divides. It’s a line neither man seems willing to step across by the work’s end. You’ll leave thinking not only about the world politics that can -and do -divide people, but about personal politics that leave terrible scars.