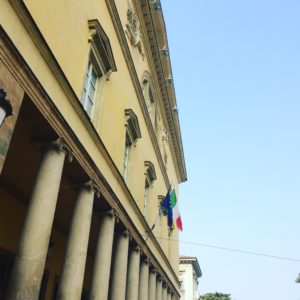 Eterior of the Teatro Regio di Parma. (Photo: mine. Please do not reproduce without permission.)

Last evening was the last of two performances of Verdi’s magnificent Requiem at the Teatro Regio di Parma. Featuring the talents of soloists Veronica Simeoni (soprano), Anna Pirozzi (mezzo soprano), Antonio Poli (tenor), and Riccardo Zanellato (bass baritone), and led with intense passion by conductor Daniele Callegari, the occasion was dedicated to the memory of tenor Luciano Pavarotti at the tenth year of his passing. The Requiem was the first classical experience I had in Italy, and it was more emotional than I was anticipating.

Coming to Italy has meant facing the lingering grief associated with losing my mother, who introduced me to opera and who passed away in 2015 after living more than a decade with non-Hodgkins lymphoma. I was her caregiver during that time, and I miss her in ways expected and unexpected. I knew this would be an emotional trip, but it also felt like an important one for me to take. Turning away from the opportunity to see some of my favorite artists live in places I know and love (like London) or places I’ve yet to see opera (like Paris, Munich, and Vienna), I chose Festival Verdi because it was, once it had been suggested to me, the sentimental journey I realized I needed to take. 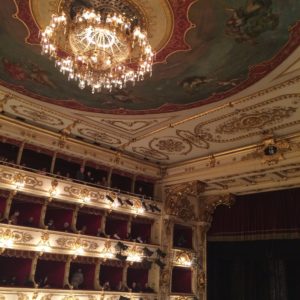 Interior of the Teatro Regio di Parma. (Photo: mine. Please do not reproduce without permission.)

Carmen may have been my first opera as a small child (I was kitted out in long gown and rabbit coat, and taken to a production at Toronto’s then-named O’Keefe Centre), but Verdi was the composer whose work I was essentially raised to. It is not an exaggeration to say his music was the soundtrack of my life. Yes, there was Elvis Presley, and Roy Orbison, and ABBA, and Dean Martin, and Patsy Cline, and many others besides (my mother loved them all), but Giuseppe Verdi’s position in our little house was central and over-arching. I was a suburban ten-year-old who could sing along with “La donna è mobile” even if I didn’t know exact pronunciations of the words, let alone their meaning. I felt an electric thrill ripple from ears to legs to toes and back again the first time I hear “Di quella pira” (and I still do now). Watching a performance of La traviata‘s famous Brindisi on PBS inspired me to hoist a juice glass and sway around the room; I didn’t really know what they were saying (something about a good time?) but it felt good inside. This music still has the same effect for me; I feel good inside hearing it, whether it’s sad, happy, celebratory, or vengeful. The socio-political subtext of many of Verdi’s works, which I learned about growing older, only made me appreciate them even more, and never stopped me from swaying inside to that Brindisi. 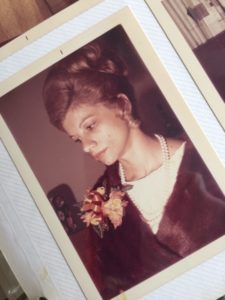 My mother in opera-going gear. (Photo: mine. Please do not reproduce without permission.)

Italophile though she was, my mother never learned the language, despite her love of opera and the many Italian friends we had through the years, and she didn’t travel as much as she would’ve liked for opera. Being a single mother in the 70s and 80s in Canada meant that going to the O’Keefe was all she could manage — that is, until we finally went to the Metropolitan Opera in New York City in the late 1980s. She’d already been of course, many years before, and prior to that, had seen many performances at the Metropolitan Opera’s original house. If motherhood (especially single motherhood) had dimmed her ability to see live performances, it had also made her go ever more deeply into her ever-growing music collection, and, at that time, record every single PBS special. I only recently cleaned out those (literally) hundreds of VHS cassettes, unplayable not just because of technological advances, but through sheer wear and tear; we watched the hell out of that stuff, and more than one happy evening was spent staring and listening, sipping on root beer floats.

Returning to the Met was, looking back on it, a kind of a homecoming for her. We sat up in the Family Circle and it was there, in the darkness, surrounded by well-dressed matrons and comfy-casual students, locals, travellers, newbies, old hands, the old, the young, everyone in-between, with the music coming in waves up to us, that I finally truly understood the depth of my mother’s passion. Not the swaying and verklempt expressions the many times she’d go up and down supermarket aisles, Sony Walkman firmly in place, listening to Saturday Afternoon At the Opera. Not the coy smile when we met Placido Domingo during his Toronto visit (a smile returned, by the way, with a wink). Not even the occasional breathy “ahh” between sections during live performances at the O’Keefe. No, nothing underlined my mother’s passion for the art form until we went to the Met, and especially, saw Luciano Pavarotti (her very favorite singer) perform, and the music of Verdi at that. If it’s possible to experience a person’s spirit leaving their body, I did in those times, and it’s a big reason I wish she was here with me in Italy. 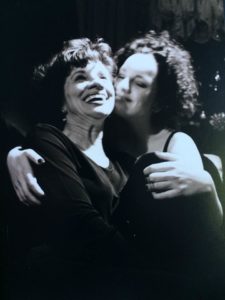 My mother and I in 2000. (Photo: mine. Please do not reproduce without permission.)

Still, there were challenges. Get two willful females living together and you may guess the rest; this trip she’d be chiding me to get a move on, stop burying myself in work, and “you don’t need that second glass of wine!” We’d argue about music as much as the mundanities of every life. I could not, as a teenager, understand her love of Wagner, whose work is, perhaps, the anchovies of opera, or was for me at least; only time, maturity, and experience allowed me to experience and appreciate the richness and complexity. While I adore his work now, in my younger days I had less than friendly feelings. My mother, by contrast, attended nearly an entire weekend of Wagner operas one trip to NYC; she wasn’t so deeply into the mythology as just the sheer, grand sound of it all, and if anyone could parse the threads between the two, it was her.

“You go for the music,” she would say. “If you don’t appreciate this stuff (meaning Verdi and Wagner, both), you can’t say you love opera.”

Not long after she passed away in 2015, an opera-loving friend active in the classical music world wrote to me. “She had the most pure appreciation for the music of anyone I’ve ever met,” he stated. “There was really nothing like it.”

Some may roll their eyes at this, and her perceived ignorance — the fact she couldn’t name all the international singers, didn’t know a lot of various directors’ works, didn’t closely follow very many careers outside of a famous few, couldn’t tell you about tessitura, cabalettas, or fach, didn’t (could’t) travel, didn’t have urban opera friends — and many more yet will say I parallel that ignorance in all kinds of ways, that I’m a twit, an amateur, a poseur, that I am pretentious and snobbish and full of hot air … to which I can only say, I admit ignorance to many things, I acknowledge the many holes that need filling, I try to educate myself in all sorts of ways, but also: I never, ever want to lose the purity of my mother’s appreciation. The day that purity is gone is the day I stop traveling, and the day I stop writing also. 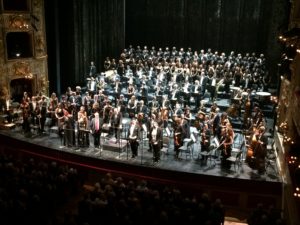 Verdi’s Requiem at the Teatro Regio di Parma, 19 October 2017. (Photo: mine. Please do not reproduce without permission.)

Last night I was reminded of my mother’s pure appreciation, and just how much it’s been passed on. There are plenty of reasons why Verdi’s Requiem is important in terms of historical and political contexts (and NPR is right to call it “an opera in disguise“); none of those relate to what I found striking and moving experiencing its magnificent performance at the Teatro Regio di Parma, though. There was such a directness conveyed by and through Maestro Callegari, whose body language and responsiveness conveyed such a truly personal connection with the score. I’ve seen this work many times — with my mother and without — and while I have my favorite performances, none rank with this one; the immense chorus and orchestra transmitted balls-out grief and anger, and were wonderfully contrasted and complemented by thoughtfully modulated performances of the performers, who carefully wielded vocal texture and volume to create a wonderfully satisfying unity of sound. The house itself created so much immediacy of sound, and I can’t wait to hear more in it throughout the coming week.

At the Teatro Regio di Parma. (Photo: mine. Please do not reproduce without permission.)

My mother attended the opera in both Rome and Florence during her lifetime, but she returned from that particular trip full of remorse, as she told me, that she’d gone to Florence and not had time to go further north, to Parma and especially Busseto, where all things Verdi are located. Her absolute dream trips were to go to Milan for La Scala, and Verdi’s birthplace and home. I’m nearby in Parma, and I am thinking of her constantly.

I smiled lastnight, my critic’s ear ever focused, thinking, “that brass section is a bit loud” only to hear my mother chide me, as she did so often in such cases, as she’d shake her mane of red tresses and furrow her brow: “Don’t be so critical all the time, just enjoy… listen and enjoy!”