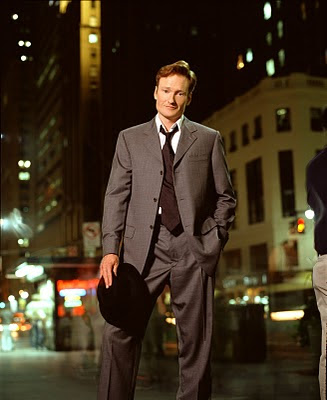 Conan O’Brien came out of nowhere in the 1990s and rocked my late night world. I was never a huge fan of David Letterman back then (too snarky) or Johnny Carson (too old), though I loved Arsenio Hall, for the great musical guests and generally modern feel of his talk show. But it was Conan who really showed me how comedy could work in a late night talk show context. The wacky cast of characters, combined with O’Brien’s zesty silliness and embrace of surrealism immediately hit a nerve, and it never really left -even when he homogenized his sweet-sour-salty humour upon moving to Los Angeles to host The Tonight Show.

Conan is funny, but he’s also shrewd, and I suspect he knew that his loopy cast of late-night characters probably wouldn’t gel with viewers in that time slot, people who were more accustomed to Jay Leno‘s gentle (some might say dull) comedy. But he was (and, I think, remains) keenly aware of the power of fun: his farewell speech on lastnight’s final Coco-hosted Tonight Show episode proves it. “I hate cynicism,” he said, and continued:

For the record, it’s my least favorite quality. It doesn’t lead anywhere. Nobody in life gets exactly what they thought they were going to get. But if you work really hard, and you’re kind, amazing things will happen…This massive outpouring of support and passion, from so many people, has been overwhelming for me. The rallies, the signs, all this goofy outrageous creativity on the internet …you made a sad situation joyous and inspirational.

No kidding. Nothing kills the fun, the zany, and the childlike instincts faster than narrowed-eyes, tight-lipped “I don’t think so”-ism. Good for Conan for not giving in and for knowing his funnybone is more important to protect than his ego.

Creative, strange, surreal… and funny, Conan and Co. have a unique humour that isn’t to everyone tastes. But it is important to have in the late-night landscape, as an equal, alongside everyone else. Go Coco. I can’t wait to see what you do next. Just make sure it’s appropriate to your gifts… otherwise, I’m sicking Triumph on you.