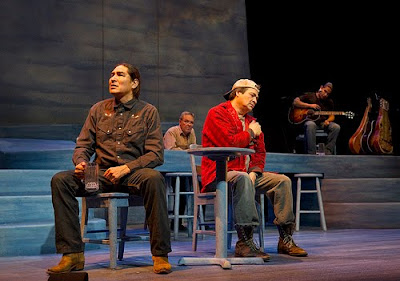 As regular Play Anon readers know, I really love theatre, though I must confess, much of it doesn’t touch me, way, way down in that murky sub-world of real, lived experiences and ghost-like memory very often. Where The Blood Mixes is different. The work, penned by Kevin Loring and on now at Toronto’s Factory Theatre through April 18th, is the story of a native Indian community and the memories that haunt its inhabitants. Set during the salmon run at the meeting point of the Fraser and Thompson Rivers, the work offers a riveting look at one community’s attempts to come to grips with its tragic past. Alternately funny, sad, irreverent and thought-provoking, it’s one work you won’t easily forget, particularly if you have a lot of ghosts wafting around the dusty parlour of a forlorn past.

Floyd (Billy Merasty) and Mooch (Ben Cardinal) are longtime friends who are also native survivors of the horrific residential school system. Director Glynis Leyshon cleverly uses the long Factory stage to transfer between time, memories places, and character experiences. Robert Lewis’ clever stage design is wonderful in conveying easy locale shifts between the outdoors and indoors, and the outer and inner lives of the characters. Live guitarist Jason Burnstick sits to one side, offering musical counterpoint to to the action; he’s a deeply gifted player and intuitive artist, though his additions occasionally muddle or make maudlin scenes that are better left in silence. Still, Burnstick’s music is a compelling complement to Loring’s beautiful writing; each works in harmony to render the tender hurts of past and present with careful precision and delicate feeling. 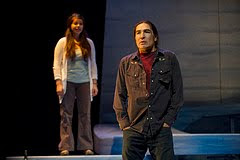 I’m not native, but I definitely, deeply related to twin themes of abandonment and reunion in Where The Blood Mixes. Loring uses contemporary native history in tandem with family drama to devastating, moving effect. I caught myself sighing wistfully during the scene in which Floyd’s wide-eyed, city-dwelling daughter Christine (Kim Harvey) confronts her father after years of separation. It was all so familiar: I made a journey myself years ago to see a father I was estranged from, with a similarly curious attitude. Floyd’s embarrassment, shame, guilt, and halting awkwardness were eerily, painfully familiar to me, as was Christine’s eagerness, vulnerability, courage, hurt, and longing. Actors Merasty and Harvey beautifully capture the ties that bind, the wounds that separate, and the blood that inevitably mixes between generations, cultures, histories, and experiences. This is theatre at its most powerful, honest, and cathartic.

Beyond the personal sphere however, Where The Blood Mixes is an important piece of theatre for many reasons: its questions around the quality and future of contemporary native life ring as true as ever, and its exploration of Canadian native history as it relates to the present is grippingly, tragically real. Loring’s writing, together with Leyshon’s masterful direction and a uniformly strong cast, makes this work one of the must-sees of the 2010 Toronto theatre season. Just make sure you bring lots of tissues.

Where the Blood Mixes runs to April 18th as part of Performance Spring 2010 at Toronto’s Factory Theatre.