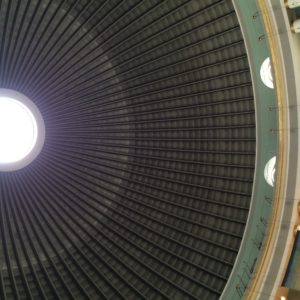 Looking up at St. Hedwig’s Cathedral. (Photo: mine. Please do not reproduce without permission)

At any time of year, Berlin is a treasure trove of cultural riches, especially for music lovers. One is spoiled for choice with numerous symphony orchestras, opera outfits, quartets, quintets, and chamber groups. Being in the city for the final week of the annual MusikFest (which you’ll be able to read all about in a future edition of Opera Canada magazine) however, it became extremely clear that Berliners take their music very seriously; the annual event (part of the larger Festspiele) is an expression of a culture that is firmly part of every day life, not an accessory to it.

One of the most unique events was the Monteverdi program programmed and presented by the RIAS Kammerchor (or chamber choir) of Berlin. Who was Monteverdi, and why should you care? He’s the father of opera, and, in a broader sense, a very important guy in the history of vocal music as a whole. The composer, who links the Renaissance and Baroque eras, even has a whole box set of his works called “The Innovator.” 2017 marks Monteverdi’s 450th birthday, so many groups are marking the occasion with performances.  Though I didn’t get to hear a lot of vocal music this time in Berlin, I did experience some very special music moments, and Monteverdi as presented by the RIAS Kammerchor had a lot to do with it.

The group, which dates back to 1948, were named after the US-run radio station “Rundfunk im amerikanischen Sektor (or “American-sector broadcasting”) and participated in the opening concert of the Berliner Philharmonie in 1963. What started as a post-war regional group grew into a highly respected ensemble with an international reputation. With an original founding principal to promote new music, the choir has premiered works by, among others, Aribert Reimann, Paul Hindesmith, and Pierre Boulez. (A gorgeous new concert hall in Berlin was named after the latter, which hosts a variety of concerts and recitals; it was one of the locales for the Kammerchor’s MusikFest concerts.) In the early 2000s, the Kammerchor’s mandate was extended to include early and Baroque works, in collaboration with a number of prestigious conductors who excel in that repertoire, John Eliot Gardiner among them. English-born Gardiner got his start in the music world conducting Monteverdi’s “Vespro della Beata Vergine” (Vespers for the Blessed Virgin) which was one of the works presented by the Kammerchor at MusikFest, and one which I’m hoping to see performed again when I visit Italy next month. (Gardiner is currently touring Monteverdi’s three surviving full-length operas with the Monteverdi Choir and the English Baroque Soloists.) 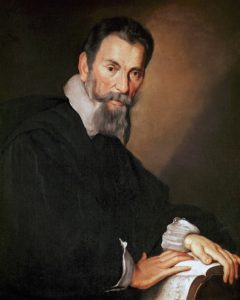 So why do we still care about Monteverdi? Well, to paraphrase what Justin Doyle (Chief Conductor and Artistic Director of Kammerchor, who is also a permanent conductor at Opera North in Leeds) says in my interview with him (below), the Cremona native invented a lot of the musical concepts we take for granted today — things like instrumentation, vocal exchanges, balance, phrasing, melody, harmony. Kammerchor performed two of his works as part of this year’s MusikFest in Berlin, the Vespers and another religious piece, the shorter “Missa in illo tempore” I heard the latter performed first, in the middle of a chilly, bright Saturday afternoon at the round, grandly austere St. Hedwig’s Cathedral; the Vespers was presented at the modern, elliptically-shaped Pierre Boulez Saal (Hall), where various soloists (vocal and instrumental) were choreographed to move around in the space, delivering lines from all angles within the hall . Both presented some very different experiences of some very old music, in ways that made it sound very new, and very alive. 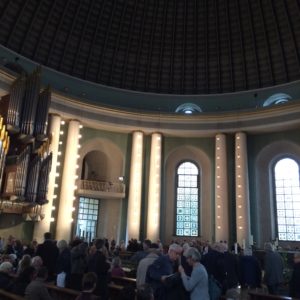 The RIAS Kammerchor at St. Hedwig’s Cathedral, 16 September 2017. (Photo: mine. Please do not reproduce without permission)

While the wide, open spaces of St. Hedwig’s allowed the sound to swirl, and occasionally submerge the audience in graceful (if sometimes challenging) harmonies, the Boulez warmly enveloped listeners, forcing a simultaneously careful listening experience and a thoughtful spiritual exercise. The poetic sounds of the Capella de la Torre (an incredible ensemble who play authentic Renaissance instruments) were so wonderfully attuned to Doyle’s directions, and the beautifully contrasting tenors of Andrew Staples and Thomas Hobbes, calling as if from dreams at points, collected, merged, and contrasted with the ethereal sopranos of Dorothee Mields and Hannah Morrison. What made the concerts particularly profound was hearing how completely conversational Monteverdi’s work is, vocally and instrumentally, and just how much drama has been naturally woven into the sonic framework. Forget bland, unchanging religious music; this was dramatically gripping and spiritually moving on every level. 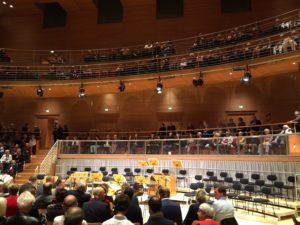 The RIAS Kammerchor at the Pierre Boulez Saal, 16 September 2017. (Photo: mine. Please do not reproduce without permission)

They were also intriguing for their sonic intricacy. One word Justin Doyle uses a lot in this conversation is “polyphonic,” which relates, of course, to polyphony. Merriam-Webster defines this as “a style of musical composition employing two or more simultaneous but relatively independent melodic lines.” Think of singing “Frere Jacques” and “Row Your Boat” at the same time. Got it? You can thank yer man Claudio for this, and many, many other bits of musical wonder. A music website focused on early music (especially Baroque) usefully describes the role of polyphony and church music thusly:

During the Renaissance, it was common for composers to set the Ordinary to music, the first large–scale form in western music. The texture was polyphonic, at first based on the underlying plainsong melodies of each section. Such was the paraphrase mass, in which an existing melody, albeit in a usually embellished form, was used as the basis for one or more movements.

As you’ll hear, Doyle is passionate about this music — and why not? You don’t have to belong to a specific faith to enjoy the riches it offers, or to hear how unusual, innovative, complex, and enlightening it is. Monteverdi may be 450 years old, but he’s still as fresh as a daisy, thanks to ensembles like the RIAS Kammerchor.