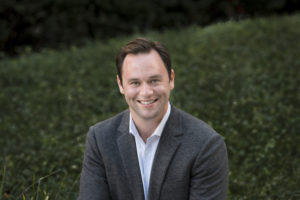 What do you think of when you read the words “new opera” ?

Some may think it’s a contradiction in terms, that opera is and must be, by definition, something old, irrelevant, and fusty, full of big wigs, big dresses, buckle shoes, and powdered faces. There’s a feeling by that opera cannot possibly, with its array of seemingly outré storylines, deal with anything approaching a timely reality.

Yet new opera has taken its seat at the opera table in many different ways. A slew of companies devoted to new works, to say nothing of the many established companies and festivals presenting modern compositions, proves there is not only an interest in such work, but a deep passion that is re-shaping the ways in which audiences are experiencing the art form. Composers have long worked to create work that is not only a reflection of the times but a commentary on them, with productions that are aimed as much to provoke as to entertain. A number of organizations have regularly featured such works, including (but hardly limited to) Santa Fe Opera, Opera Philadelphia, the Canadian Opera Company, the Royal Opera Covent Garden, the Salzburg Festival, Glyndebourne, and yes, the Metropolitan Opera. 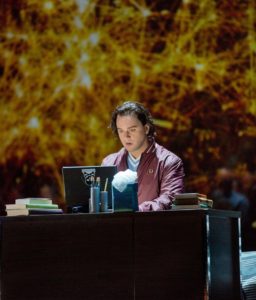 Contemporary composer Nico Muhly, whose latest work (an opera adaptation of Marnie) recently opened at English National Opera, had his Two Boys produced at the Metropolitan Opera (who commissioned it) in 2013; the work was far from the company’s first new work, of course, but it created a buzz that made me very curious to attend.

(Another buzzy new work is on this season at the Met; The Exterminating Angel, by Thomas Adès, is based on the surrealist Buñuel film of the same name, and will be covered in a future feature at this website. Stay tuned.)

Based on a true story that unfolds in the early days of the internet, Two Boys revolves around a teenager becoming entangled in a web of obsession and murder; the work was especially notable for its integration of music and technology both within the score as well as in a carefully controlled production by director Bartlett Sher. The work offered a dramatic exploration of modern life, sexuality, and the entangled relationship between each. I came away from it bowled over by the lead performance of tenor Paul Appleby, who played Brian, a lonely figure who gets sucked into a nasty catfishing scheme with a very surprising source. Vulture’s Justin Davidson described him here as “a marvel: an intelligent young singer equipped with the elegance and expressivity of an old pro, impersonating a lost soul of a kid.” 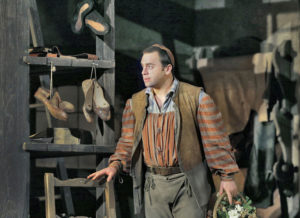 For contrast, I recently turned on a 2014 Met remount of Otto Schenk’s traditional production of  Wagner’s epic 1868 work Die Meistersinger von Nürnberg, in which Paul performs the role of David, apprentice to Hans Sachs, one of the titular Master Singers. Re-watching the lengthy work (which is more timely than one might initially think) reminded me, hoary as it may sound, of the extreme versatility demanded of singers in this day and age; nothing could be further from Two Boys in content or in staging or style, but Paul’s ease with the score, his loving embrace of the diction, the sparkle in his eyes singing — it was all magic, and reignited my excitement for the possibilities of the art form.

It’s inspiring to think of Paul’s latest role, in another new work, this one by American composer John Adams, with a decidedly female-forward viewpoint. Called Girls Of The Golden West, it has its world premiere this coming Tuesday (21 November) at San Francisco Opera. As New York Times classical writer Michael Cooper rightly notes of Adams, “(t)his onetime enfant terrible has grown into an elder statesman.” An Adams premiere is an event, not just for opera, but for culture as a whole. Does opera have anything to say? Should it? Can it? These questions are, perhaps, most clearly confronted at premieres like the one happening in San Francisco this coming week.

They’re also questions singers contemplate, even as they dissect scores, learn marks, and explore characters. A graduate of the Metropolitan Opera’s Lindemann Young Artist Development Program, Paul made his Met Opera debut in Strauss’ Ariadne auf Naxos and his San Francisco Opera debut in 2016 in Mozart’s Die Zauberflöte (The Magic Flute); he’s acclaimed for his Tamino in that opera, as well as other Mozart works (including Don Giovanni and Cosi fan tutte), as well as those by Berlioz, Handel, Britten, and Stravinsky. Paul recently took time out of his busy rehearsal schedule to chat; along with being a classical lover, he’s also a keen Bob Dylan fan, a dedicated recitalist, and, as you’ll hear, a performer with strong opinions on why new opera matters.

(Sidenote: Paul is known — and rightly celebrated — for his Tamino, not his Papageno (both characters in Mozart’s Die Zauberflöte) as I say here. Please pardon the silly / mortifying mix-up.)