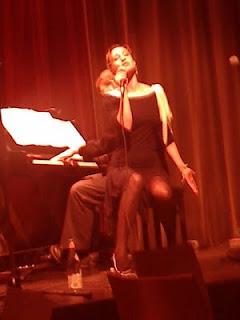 A recent exchange with performer Sharron Matthews for Love, Loss And What I Wore inspired a bevvy of ideas around the artform of cabaret. As she told me, cabaret is “a form of storytelling.” I like the idea of sharing stories within a musical realm; it’s something that my friends and colleagues at Givernation understand very well, in fact. Storytelling is, for many, central to one’s experience of art itself.

Sharon performed her own cabaret shows at the Young Centre recently. The busy Toronto arts complex in the Distillery District has had a few solid nights of cabaret happening over the past few months. The Saturday Night Cabaret Series has featured performers Patricia O’Callaghan, DK Ibomeka, Heather Bambrick, Denzal Sinclaire, and Don Francks. Upcoming artists set to take part in the series include Elizabeth Shepherd, Mary Lou Fallis, and Micah Barnes.

It’s an eclectic mix, to be sure, but one that underlines the importance of keeping the programming diverse and unpredictable -two things I feel are central to the artform of cabaret. I couldn’t imagine week after week of crooners, soulsters, fiddlers, jazzsters, or divas. Mixing them up, however, produces just the right zesty flavour befitting a good, engaging music series devoted to the cabaret style. 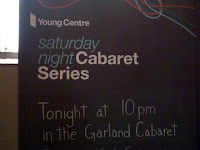 In attending a few of the first shows this season, what struck me immediately was the intimacy: the gap between performer and audience member has never been so minimal. Cabarets are situated in the tiny, black-curtained Garland cabaret space where the close quarters of piano, bar, chairs, tables, and stage implies an immediacy you don’t get in many other small, clubby spaces. The performers are very-nearly in the laps of the mainly silent, awe-struck audience. Musical styles run the gamut from German arthouse (O’Callaghan did portions of Weill’s The Seven Deadly Sins) to sexy, soul (with Ibomeka using his enormously rich bass voice to full, spine-tingling effect on Cohen’s “Hallelujah”). Again, diversity’s the name of the game here, making for what I felt was a good, if occasionally challenging, listening experience. Cabaret isn’t about making you comfortable however, and I was happy to have experienced that diversity, if only to expand my own knowledge and sonic repertoire. 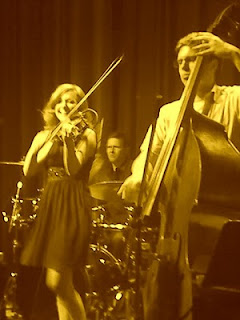 Perhaps the most entertaining cabaret I attended was one that featured a gaggle of “roaring girls” -the Roaring Girl Cabaret, that is. With fiery fiddler and frontwoman Miranda Mulholland, the musically-tight band delivered a walloping blend of Celtic-meets-bluegrass-meets-nasty-blues-rock sass with attitude, aplomb, and plenty of good cheer. It was great to actually see Mulholland’s eyes sparkle, and small mouth smirk as she delivered line after line of cheeky lyric, interspersing each with meandering if powerful East-Coast-violin sounds. At points she even vibed Nick Cave’s dark-lord lyrics and style: quiet and poignant one moment, roaring and bombastic the next, it was thrilling to behold, and refreshing to see Mulholland go against the cute-girl stereotype others might put on her. Don’t put this roaring girl in a box -she’ll kick your ass. Seriously.

An evening at a Young Centre cabaret is to be transported to another time and place –not merely the “gold lame outfits”-type thing Sharon Matthews referred to -but one that exists entirely by you and for you, meticulously moulded and shaped by any given performer on any given Saturday. Each comes with their own stories -tales of heartbreak, triumph, of lives fully lived -but it’s totally up to you, at evening’s end, to choose what to take home. In my case, the doggie bag was full of goodies I’m still enjoying, many weeks later.

Cabaret, for me, isn’t about being transported to “another time and place” as the old saying goes… it’s about feeling, fully and entirely, grounded in the wonder of the present moment, with every passing note, crooned syllable and extended vowel. There’s a story in every sound, the cabaret whispers, just sit still. You’ll hear it.

Tonight the Help for Haiti Now concert took over every major North American network. This tune was a huge favourite -a moving, tender, insightful moment full of soul and musicality. I never thought I’d enjoy JT singing a favourite Leonard Cohen song but… I was wrong. He should just sit and damn well sing more often. Even my mother (the opera fan) sat, enraptured, and enthused on the simple beauty of Justin’s voice. Accompanying him was Matt Morris, a multi-talented singer/songwriter who’s worked with fellow Mouseketeers Timberlake and Christina Aguilera in the past.

The gorgeousness purity of “Hallelujah” was indicative of the soulful, stripped-down nature of all the performances. Gospel sounds were heard throughout the night, with Stevie Wonder, John Legend, and Jennifer Hudson all making a noise most joyous; Hudson’s rendition of “Let It Be” was another highlight for me. Madonna took the two-decade-old “Like A Prayer” out of retirement and let fly; the rousing gospel chorus that carries the song to its conclusion was hugely uplifting and moving. Even Madge had to move around.

Overall, Hope For Haiti Now was full of great sounds and some genuinely moving moments. Anderson Cooper’s reports, featuring overwhelmed survivors (mainly children), could’ve turned maudlin and saccharine, but miraculously, stuck with being gently hopeful, while maintaining the appropriate hum of urgency. It was a lot better than the sentimental pap I was half-expecting/dreading. Well-done, all-around.