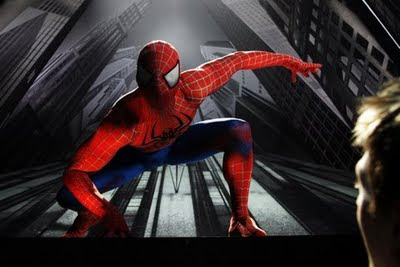 A documentary aired on television earlier tonight about the legendary Chrysler Building here in New York. It brought to mind the incredible sets of Spider Man: Turn Off The Dark. Apparently the famous landmark features prominently in the musical’s scenic design, by George Tsypin.

The troubled (and hopefully now, not-so-troubled) production opened tonight at the Foxwoods Theater. I’ve been following the show’s developments for a while, and was one of its biggest boosters, until actor Christopher Tierney suffered a serious injury last December. Then I just got worried. Then frustrated. Then angry. I followed, with some horror, the drama involving director / co-creator Julie Taymor being forced out by the show’s producers, in March. Things seemed very ugly and uncertain for a while, and it’s something of a miracle the show is finally opening tonight. I’m happy for everyone, though until I see it, I’m going to withhold judgment, and good or bad ideas. Still, I remain very curious.
Lastnight I somewhat quenched that curiosity, and joined a few hundred curious other folk to hear two of Spider Man’s producers, who are also its composers (and, oh yeah, mega-mondo big-ass rock stars), spoke in a public forum about the show, its problems, its challenges and its potential. The 92nd Street Y buzzed with energy as the 8pm start time came and went. The intimate auditorium brimmed with either super-excited super-U2-ers, or Broadway fans curious about what the Irish pair might have to say as newcomers to the Great White Way. Author Salman Rushdie was also present, along with a smattering of New York intellgentsia and longtime Y supporters, who sat in thoughtful silence, even as a small but annoying smattering of gushing female mondo-fans over-clapped and giggled at every little rock star face. (Note to self: next time there’s an empty seat beside Mr. Rushdie, take it.)
Interviewer Jordan Roth, President of Jujamcyn Theaters (the company behind shows like the award-winning The Book Of Mormon and Jersey Boys) and host of Broadway Talks at 92nd Street Y, asked the two about the attraction of the live stage. Edge rightly pointed out that “(U2) found its feet on a live stage”, while Bono noted that “there’s a thing happening in culture at the moment, where the live arts seem more important than the recording.” He continued:

It’s that inexplicable thing when you get a great performer and great material, and it can only happen in a live context. We were intrigued by it, and we’d seen some great shows like Les Miz and some of Andrew Lloyd Webber’s shows. We saw the chance to do something where we could take advantage of what we were playing around with in rock ‘n roll, and if it was the right project, it might be something we’d want to do. 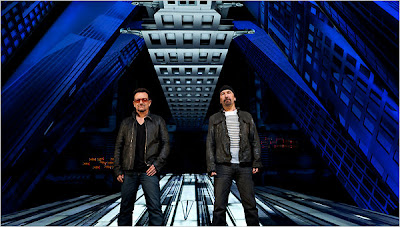 I pondered this as I sat through the nearly-90 minute Q&A session, which was equal parts frustration (far too much uncritical fan worship) and fascination (body language indicating extreme nervousness for at least one of the composers), peppered with plenty of charm, sarcasm, and humor. The interview was a mix of casual and formal, focusing on U2’s creative output, and its connection with the experience of writing and producing on Broadway. Inane questions about “who do you think the next Gandhi will be?” aside (a fan question submitted earlier), it was, for the most part, an interesting mix of honesty, humor, and humility, offering a rare insight into the harried journey of composition and creativity from two very, very famous men.

Walking out of the Y at the talk’s end, I reflected on the power of live arts, and of theater especially. Sunday night saw my Twitter stream fill with people’s reactions and observations on the Tony Awards, which were unfolding in real-time. People were virtual fist-pumping, guffawing, loudly declaiming -it was a drama in and of itself -as they found a community of like-minded, live-loving souls whose whole existence seemed focused on the sheer pleasure of watching live people do rather ordinary things extraordinarily well. In the wired up world of the 21st century, there’s something awfully reassuring and simply good about going to the theater; there’s a certain kind of bond created, however unspoken, between audience and cast and crew -it’s a symbiotic relationship involving trust, tech, timbre, and sometimes even tap-dancing. MP3s, iPads, and fancy mobiles with a millions apps can’t compete -and shouldn’t. To see this kind of passion replicated on Twitter for the Tonys was an interesting experience; it’s the same phenomenon as during the Oscars, or any other awards show, or any other big event, for that matter. There’s a community -but it isn’t the same as live theater. Being part of a group of living, breathing, sweating human beings in the dark, watching other living, breathing, sweating human beings lit up and performing before you is a uniquely delicious experience, one that speaks to our common humanity and desire for shared, live experience.
Saturday night I was able to finally able to partake in this shared experience. I attended my first piece of theater since moving to New York, which felt like somewhat of a momentous occasion, even if I went in with mixed feelings about Tom Stoppard’s play Arcadia. I completely overlooked that awkwardness in favour of the opportunity to see -no, experience -real live people onstage, playing. Playing roles, and beautifully, simply, playing. (As it turns out, David Leveaux’s production was so excellent, I’m now a confirmed Arcadia fan.) This is something I think the composers of Spider Man inherently understand; they have, for wont of a better word, been playing, literally and figuratively, onstage now for thirty-plus years. Transferring that energetic faith and exuberant zeitgeist for live performance into a real, concrete thing that serves the difficult, choosy twins of narrative and character is always an uphill struggle, especially if you’re used to composing within the fiercely competitive, pressure-cooker world of Broadway. 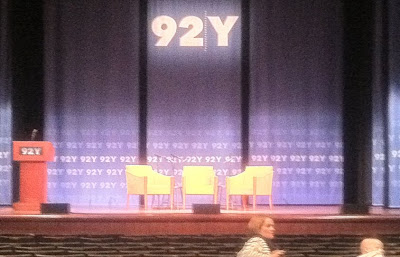 Lastnight, Bono admitted that the show still has “10%” left to improve on, and won’t close that gap for at least another two months. “In the end, The Edge and I have got good manners, we’re fun… but we are motherf***ckers,” he noted. There was steel in the singer’s husky voice, a characteristically Dublin-esque stare-down in his no-nonsense expression, devoid of usual charm, but with a bald, toothsome authenticity that made the comment -and its delivery -deeply affecting and entirely believable. That simple, blunt acknowledgement captured the sexy, succulent siren’s call of play and creativity, and her fraught relationship with the ugly, gargoyle-like nose-to-the-grindstone practicality that could only (and must only) be Lady Siren’s lifelong mate. What results is frequently personal, but when you’re in the performing arts, it winds up being writ large, up for debate, criticism, hounding, and eternal judgment. Such is the fate of such a union, of such a scary, scintillating, and in many ways, artistically necessary undertaking. A near-alchemical mix of faith and hard work sometimes open doors to new worlds -and sometimes not.
In the end, the mantra is simple: Work hard. Play hard. Live hard. That is theater’s call to all of us, however we may choose to weave our webs.
Photo credits: