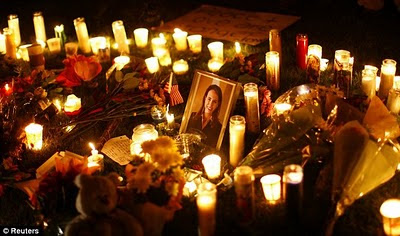 The shooting of Gabrielle Giffords this past weekend was a shock and yet, was weirdly unsurprising. There’s been a huge gulf forming -and festering -politically in North America for some time, a divide fomented by the self-interested, the greedy, the ignorant, and the selfish. Division is being emphasized more than similarity, individual voices more than one harmonious sound. A few pop culture references came to mind amidst the myriad of news reports, blame assignation, finger -pointing, and distressing web scrubbing. “I hope the Russians love their children too,” sang Sting during the 80s Cold War hysteria. “We’re one but we’re not the same; we got to carry each other,” sang Bono in 1991, months after the Berlin Wall fell. Together, these words, from the world of fluffy, seemingly-innocuous popular culture, carry a powerful idea: people have the capacity to recognize a shared inner humanity, even if there are outward differences. We don’t have to get hung up on those differences, but we do have to respect them and work (sometimes hard) to remember that hatred is hatred, no matter which perceived “side” spews it -or worse, acts on it.

Maintaining grace in the face of the horrendous violence as seen in Arizona recently is wholly difficult, if not seemingly-impossible. We feel anger, the need to blame, the responsibility to call to account, to mete out judgment, to avenge, all in an effort to heal to make sense, to, in our minds, “set things right” and deal with not just our pain, but the pain of an entire nation. We think we have the answers individually or within our shared-worldview groups. This self-righteousness is dangerous. The motives behind the actions of the alleged shooter may not be clear, no matter what a Myspace / YouTube page may imply. I wonder what the online pages of other would-be assassin in history might look like; would Squeaky Fromme‘s site have music, photos of she and Charlie, a “donate” button? Would John Wilkes Booth have a Twitter stream full of political vitriol and shout-outs to theatre companies? what about Lee Harvey Oswald? (Actually, his page would be probably blocked by the CIA. But a “I’m a PATSY! Why won’t anyone listen to me? Come ON!” status update isn’t too hard to imagine.) We can all probably guess who might be running his very own Jodi Foster fan site. 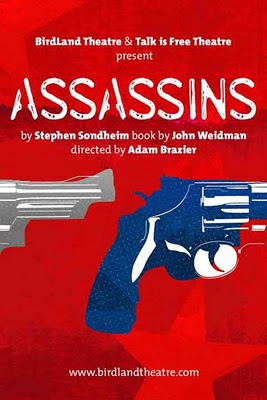 These are just some of the characters who populate Stephen Sondheim’s dark (and strangely timely) 1990 work Assassins. The work is a keen examination of the drive for fame, notoriety, and revenge, and speaks to the contemporary need for heroes and villains, even when the portrait is never accurate, especially when done in the heat of the moment. These are characters, who, for all their infamy, are remarkably like… us: they blame, they rage, they feel wronged and ignored. They’re self-righteous, deluded, needy, the ultimate outsider moving on the inside of some movement or psychosis (or both). And they want more. Always more -more justice, more retribution, more notoriety, more attention, more people-listen-up-cause-you-know-I’m-right-yo. More everything.

Actor Paul McQuillan plays John Wilkes Booth in the current remount of the Birdland Theatre Production in Toronto. The erudite artist offered his own thoughts on the work, and how his own longtime yoga practise has influenced and shaped his approach to acting -and to playing a killer.

Tell me a bit about your role in Assassins.

John Wilkes Booth was a failed actor from a high-class family with passionate (inarguably extreme) political views. I suppose nothing could have been more gratifying to his narcissistic essence than to cast himself in the biggest role of his uncelebrated career and, at the same time, give his radical/racist views an undeserved spotlight. So, he killed the president…in the theatre. “Other than that, Mrs. Lincoln, how did you like the show?”

How do you see this year’s production being different from last year’s?

It is a great opportunity as an artist to explore a complex piece of work (Assassins surely gets that distinction) further, after fully letting it go. Sadly, it reminds me of the incredible insights we often have regarding a failed relationship long after it is over, except in this case, you’re being given full permission to freely jump back in and learn from your misgivings. I have had endless conversations with other actors who are in the final week of a run and -in the middle of a line -finally understand what is coming out their mouths. It’s usually a moment that carries epiphany-like joy and paralyzing regret. “That’s it. That’s it!!!” followed by, “How did I not discover this in rehearsals? S.T.U.P.I.D!!” I have already had many of those moments…and I’m just talking about TODAY! 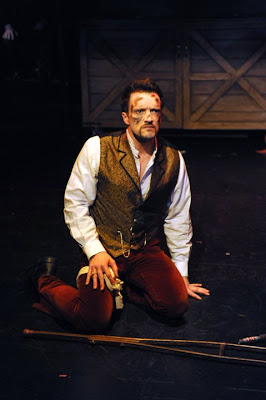 How do you see this show being a commentary on contemporary politics?

It is always a testament to the credibility of any theatre piece if it can transcend time and its many restrictions theatrically. What might be deemed a potent piece of work ten years ago, can seem dull and dated today. Even period-piece musicals can seem tastelessly ineffective unless given an updated spin. A musical such as Rogers and Hammerstein’s Carousel is a good example. If left as originally written, it appears quite misogynistic, in my opinion.

Luckily, Sondheims’s Assassins tends to pay more respect to social themes than fleeting fads, therefore making the work timeless. Certainly, Assassins has no respect for the restrictions of time and I believe that is one of its clever qualities. We see that the issues of people in Abraham Lincoln’s day can easily be compared to socio-political issues of Kennedy’s era.

On another note, politics has always been the equivalent of a reality show, constantly morphing to the insatiable needs of the viewer/voter. Politics has yet to find a perfect balance for the people and countries it aims to subdue or entice. I heard Marianne Williamson say recently, “communism glorifies the collective at the expense of the individual and capitalism glorifies the individual at the expense of the collective.” Finding that balance can create many casualties in ANY time period. The arguments of John Wilkes Booth against the presidency of Abraham Lincoln are not much different than that of the certain parties speaking against Barack Obama. Politics will always manifest social unrest. How that social unrest is manifested is on full display in this musical for two hours, eight times a week. 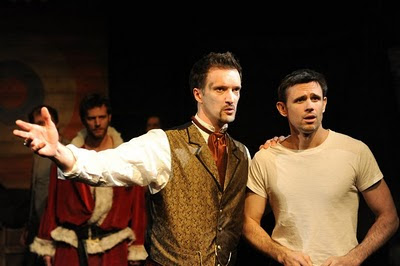 Your character is based on an historical figure -is that strange to play? Does it create a certain kind of pressure?

If John Wilkes Booth had been caught assassinating Abraham Lincoln on Youtube, I would definitely feel a certain pressure to capture his esthetic subtleties and personal mannerisms. Luckily, there were no cell-phone cameras in 1865 and I feel as though I can freely give him my own spin. I think people are more attached to the incredible mark he made with the actual act of assassinating Lincoln than anything else.

How difficult is it to balance singing, dancing, and acting?

In the past I have often heard people criticize music-theatre performers. This always seems ridiculous to me because I have never been more impressed than when I have witnessed an actor capture the authenticity and complexity of a character in song and dance. It’s also very effective dramatically. The flip side of this is that it also makes tackling these roles extremely daunting and the challenges pile up quicker than streetcars in a snowstorm.

So yes, it is quite difficult to balance these disciplines in one show. But if done well, the payoff is that much greater. 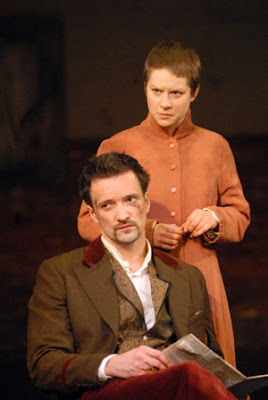 Where do you think this work fits within Sondheim’s canon? It isn’t as well-known as some of his other works.

I was on Broadway with a show called The Buddy Holly Story when Assassins was originally being planned to open but it was delayed because of The Gulf War in 1990. I remember the buzz being that it would have been a highly insensitive piece of work to introduce during that time. They got scared and pulled it. There were just 13 shows running on Broadway that year and most of them were light fare.

I think Assassins is more potent and daring in its views than any of Sondheim’s work, and for that reason, it is probably done less. It’s pretty in-your-face with its message and that kind of tactic can make people stay away today, sadly. The mindless jukebox musicals seem to have a bigger draw these days, but like I said earlier, reality television has also taken over the airwaves. People don’t want to think anymore when they go to the theatre and at the risk of sounding crass, that offends me. Theatre can be a mirror to the soul or it can be a mirror used to put on lipstick.

How has your yoga practice influenced the way you approach your stage work, particularly in this role?

When I practice yoga, I do my best to focus internally. You find out what is going on inside. It is no different with inhabiting the psyche of any character. There is a lot of observation without judgment or attachment. I don’t really know what method acting means because I think it misses the point. There has to be a certain amount of separation from a character as demented and troubled as Booth or I would be in a straight jacket at the end of the show. I can capture the essence of that feeling without actually occupying it and letting it take me over.