Also included is the incredible Eternal Hydra by Anton Piatigorsky. I loved this Crow’s Theatre piece when it premiered in Toronto last spring. As the video piece I hosted and co-produced (for Lucid Media) demonstrates, Piatigorsky’s play is challenging, but it doesn’t abandon emotional interaction entirely, either. Rather, it nicely balances the head and the heart within a fascinating, Borges-esque piece of existential drama that touches on questions of creativity, authenticity, and identity. Eternal Hydra won a bevy of Dora Awards (Toronto’s equivalent to the Tonys) back in June, and for those who didn’t get the chance to see it at Buddies In Bad Times Theatre last year… well, get thee to Factory. It’s going to be a great season.

Folk, Present And To Come 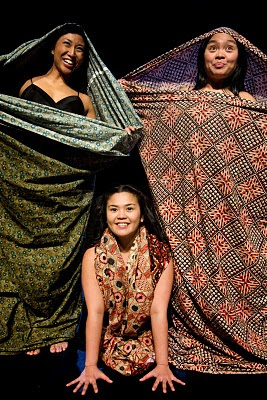 Future Folk is a challenging title; it implies a vision to the future, but also a glance to the past. The play, now on at Toronto’s Theatre Passe Muraille, centers on the lives of Filipino nannies who come to work in Canada. Produced by Canadian company Sulong Theatre Collective, the show is a reminder of the silent caregivers who populate households and often endure terrible treatment in order to support their own families back home. The word “sulong” means “battle cry” in Tagalog and is a suitable match for the show’s angry undercurrent; it’s described as a piece that “shouts, wails and screams on behalf of brown women everywhere“.

Great, but there’s been some criticism that the play is too agitprop in its depiction of live-in nannies’ struggles in Canada. One Canadian newspaper recently ran two interesting pieces contrasting actual nanny reactions with their theater critic’s view; it was a good insight into the ways celebrated slice-of-life theater isn’t always reflected with exuberant critical acceptance. Not that Catherine Hernandez cares.

Sulong Theatre Collective’s co-founder wrote Future Folk without worrying over whether balance was being served. As she told me (below), balance and truth aren’t always friends. Hernandez is a feisty one-woman theater dynamo whose first play, Singkil, was nominated for an astounding seven Dora Awards. She’s worked with a bevvy of celebrated Canadian theater companies, including fuGEN, Buddies in Bad Times, Native Earth, Aluna, and many others. Hernandez set out with the intention of challenging stereotypes and shaking people out of their comfort zones -all while remaining respectful (read: loving) toward the original women’s stories.

How much of Future Folk is based on direct experience?

All of it is based on direct experiences of women we interviewed. Most of these women were still in the caregiver program, others had just completed it.

What was the main challenge in theatricalizing nanny experiences?

First, it was actually speaking to the caregivers. I would book time to speak with them on their day off, only to have their employers cut their day off due to their own busy lives. Next, was to be absolutely honest about our -as in the collective’s -position of privilege. We had to remember that we were not them. Although I worked as a caregiver, I was never live-in, nor was I a mother at that time wondering about the safety of my children while caring for others. When we admitted this to ourselves, we were able to delve deeper into their experiences with curiosity and open-hearts instead of assumptions. 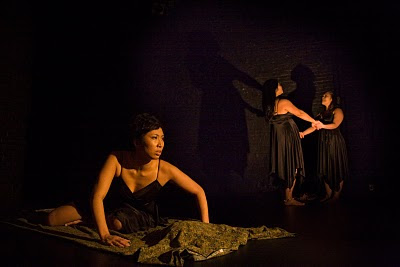 How do you balance the bad experiences with the good ones in the work?

This is one of the major comments about our work: the balance. Hmmm… I think it’s telling when every caregiver I met has complaints about the power struggle with their employer. It’s even more telling when people outside of the caregiving community and those who are employers bring up the “good” side. What it means to me is that there is an obvious disconnect with the realities of these women. I had a conversation with playwright Maja Ardal about this, and she said, point-blank, that it matters little to show balance. What matters is giving voice to the voiceless. These women are definitely voiceless. So balance be damned. I am not in the business of making people feel okay about themselves. I am in the business of helping people be self-critical. Balance doesn’t do that. Truth does.

Who did you write this for?

I wrote this for both the caregivers and for those outside of the caregiving community. For caregivers, I wanted them to see their story onstage and to know that their lives were remembered and honoured by someone… I wrote this for the average Canadian who might have a range of emotions seeing the show, anything from “I’m not like this” to “These women are so lucky for the chance to be here -why complain?“ 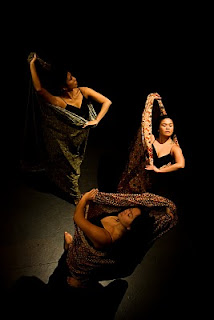 How have you felt at various nannies’ reactions?

It has been overwhelming. When we first performed a ten-minute excerpt at the Kultura Filipino Arts Festival at the Kapisanan Centre, we had two caregivers in the audience. They came backstage sobbing and thanking us for portraying them. We knew we had to continue, no matter what. When we perform on March 7th, we will be performing for free to a house full of caregivers. That’s when I feel our job will be done.

What do you hope audiences come away with?

I want each audience to come home that night, look right inside their hearts and ask themselves what they truly think about migrant workers. They’ll probably be surprised by what they find. We, as the collective certainly were. Throughout this process of development, I can’t tell you how much respect I have gained for these people. I will be forever humbled.

An interview, that is.

Wajdi Mouawad’s play Scorched is considered to be one of the finest pieces of Canadian drama. Everyone, from audiences to critics alike, agree it’s an important, vital, and deeply moving work.

The Dora Award-winning Scorched examines issues of war, family, and identity, and is on now at Toronto’s famed Tarragon Theatre, where it runs until September 28th before heading out on a nation-wide tour.

Tomorrow morning on Take 5, I speak with actor Sergio DiZio (best known from the television series Flashpoint about his role in the play, as the troubled, amateur-boxing son Simon Marwan.

Sergio and I will be discussing Mouawad’s work, as well as the playwright’s soon-to-be-famous letter on the recently-announced arts cuts.

Support Canadian culture and tune in, just after 9am!