Along with the cooler temperatures of fall comes new opportunities. My challenges around shifting perspectives, having been helped along by artists, projects, and friends, was underlined this week with two events: attending the opening of the new Nicolas Ruel show at Toronto’s Thompson-Landry Gallery, in the city’s historic Distillery District, on Thursday night, and going to the opening of Secrets of a Black Boy, at another historic location, Toronto’s Danforth Music Hall, lastnight. Each experience afforded me some rich insight into the nature of perception, particularly as it relates to urban landscapes, and to those around us, and how we relate with them.

Ruel works in large-scale photographic works, printing his multi-layered urban landscapes onto smooth stainless steel. To quote the gallery’s website, his most recent work, projet 8 secondes, “depicts urban civilizations captured by the photographer in sustained intervals of eight seconds.” The cities of Shanghai, Tokyo, New York, Paris and Sydney are all explored in images that are both dreamy and hard, ethereal and slick. It’s somewhere in the middle -and the viewer has to find that middle -where the truth of Ruel’s work lies.

This eight-second exposure pause is interesting to me because it collapses conventional notions around perception, time, and the relations we draw between each. Architecture becomes dance; streets become skies. Solidity is rendered extremely fluid, implying our fixed notions of time and space -and our place within each -are merely illusions, that there’s no “fixed” at all, that, even with the hard shiny surface of stainless steel, a myriad of hidden illusions and layers lies just beneath the surface. It takes an adjustment in position -physical, mental, emotional -to see the things that lie concealed in the most surprisingly shallow ways. Such a small shift allows us to view the world around us -ourselves, our relationship with others, including solid structures and forms -in a new, more fluid, all-encompassing way. If you think you’re stuck in one spot, Ruel’s work whispers in a silvery, high-timbred way, think again -step back, step over, turn right, turn left. Small shifts change everything, and underline the fluid, non-linear nature of existence. 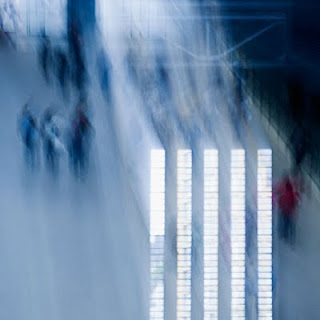 I found myself particularly compelled by two works, one of which was shot in London, England, a favourite city I lived in a decade ago. I’m always fascinated by the ways in which artists choose to shoot such a vivid, varied place; each one seems to bring me back to Pepys‘ work as well as Johnson’s famous statement about the British capital, adding miniscule bricks to his stance. Ruel’s work is deceptively simple; it features a window, layerered with subtle shapes. But is that all? No, it looks like there could be the vast environs of a train station defining the piece, giving it scale and context. The piece, “Window,” gives off a smoky, oblique sheen that uses empty space as a dramatic character. Is that smoke? or clouds? is this about terrorism? or daydreaming? or travel? the transitory nature of modern life? of art? of perception? is this simply about resting the brain and not thinking? Is that the right response? Having lived in the city, I had a personal reaction to it -and I think, perhaps, that might be the point. We each carry personal ideas and sometimes experiences around the cities Ruel depicts. He’s asking us to step aside from those notions, however slightly, and look at things in a new way. 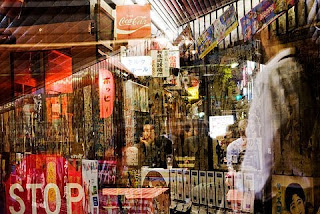 The second work I was drawn to, “Midnight Stand,” was shot on a narrow, crowded street in Tokyo, and is impressive for its sheer size (it’s at least six feet across, if not more, and almost as high). The piece has a bustling, busy energy, with the electric light glow of the street dancing against the ghostly top half of a man semi-super-imposed on top, his white-shirted arm floating amidst the cacophony of reds, blues, and greens. This is one of the more colourful pieces in the collection, in that Ruel has allowed a myriad of shades to infuse his work -unlike “Window,” which uses deep blues and greys, its depiction like a paned, smoky-cemented bruise of modern life. The mammoth Tokyo work gave an impression of a city at once colliding with and embracing tradition -melding old and new ways. While this isn’t a new idea about the Japanese capital, it was originally presented, with little shops and lights almost appearing as strips of celluloid, or comic panes; look from a different angle and… wow, there are people. Actual, real people, with actual real lives, trying to earn a living amidst the hustle and bustle. There was so much texture built up on the smooth piece of steel as to be awe-inspiring. Different levels of perception, reality, and experience collided, and I had to take a step back and go for a glass of Riesling and a deep breath. Fascinating, compelling, poetic -just some words I’d use to describe Ruel’s work. You won’t quite look at your own city the same way again. 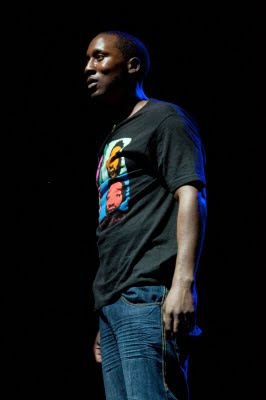 I thought about this shift in perspective watching Darren Anthony’s deeply affecting premier work, Secrets of a Black Boy, which opened lastnight at Toronto’s sizeable Danforth Music Hall. Despise some venue drawbacks (the lobby is weensie and the raking is shallow, so if you’re short and get stuck behind a giant… too bad), the show is solid, uplifting, moving, and not a little provocative. Anthony is the brother of theatre artist Trey Anthony, best known for her hit work Da Kink In My Hair. While Trey explored black female identity, first-time playwright Darren examines male black identity, particularly within the modern urban context of a rapidly-gentrifying downtown Toronto. Five young black men come together in a community hall that is soon to be torn down, and, over a game of dominoes, share their histories, anxieties, fears, and joys. The intimacies are delivered one-by-one in a series of monologues addressed to the audience, with other cast members occasionally joining in and acting out requisite parts. Issues like sex, parenting, gender relationships, homosexuality, friendship and gun violence are all touched on, some with more subtlety and grace than others. The lines about AIDS and condom usage came off a bit heavy-handed, but then, nothing about Secrets is especially subtle anyway. There’s a vibrant mix of hip-hop, soul, old-school funk, and classic rap pumped out by a live DJ throughout the work, providing atmosphere, accent and emotional underpinning as needed. Wisely, some scenes are allowed to be silent (such as a monologue delivered by a domestic abuser, played and delivered by Anthony himself), and in others, it’s the actors themselves who provide the noise -for instance, opening the second half with a Stomp-esque dance/clap routine and closing the show with a repeated, urgent plea: “We. Are. Here.”

Secrets of a Black Boy is everything Canadian theatre should be in 2009; it’s vibrant, zesty, thoughtful, involving, and deeply insightful. It’s also chalk-full of talented (and um, gorgeous) people. The audience for the show’s opening was equally fantastic; I’ve never seen such a young, eclectic, stylish, and involved group at an opening (and they weren’t tiresome luvvies, either). This is the audience most Canadian theatres are, I think, frothing at the mouth to get. Yet it takes more than a DJ and some graffiti-esque design to bring them. Anthony and his team have worked at marketing the campaign across social media platforms and have integrated many aspects of their own experiences into the mix. I got the feeling Secrets isn’t viewed strictly as Art, either (the “You are coming to the thee-uh-tah, we are doing something totally Art-full here, now act smart and say deep things”-hipster posturing that dents so many promising productions for me); rather, the show is Community itself, and that community is much, much wider and deeper than any stereotype of The Male Black Suspect. These are real men, with real problems and challenges, some of which I actually found myself relating to. The bit about absent fathers and the grief that causes throughout life rang particularly deep bells for me, a white woman living what is probably a pretty privileged existence. Funny how the intimate can become epic, and then intimate all over again.

Anthony’s work is sincere, honest, and refreshingly unpretentious. It’s also fun, and has a fantastic streak of interactivity running through it. As with Ruel’s work, you won’t look at your own city -or the people who make it up -the same way. We all have secrets -even cities have them, really – but it takes a shift in thinking and perception to see what they mean -and how they can change us and our choices -in the long run. Bravo Ruel, Bravo Anthony; you’ve made me change the lens and take the long way home.