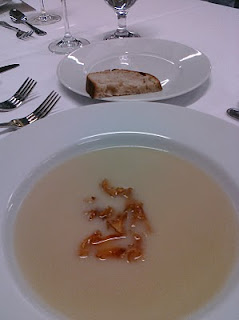 Appropos of nothing, I’ve been thinking about sunchokes recently.

Actually, there is a reason I’m bringing them up; I enjoyed a beautiful dish with them before I went to New York. Accurately described as “gnarly little tubers”, they’re also called Jerusalem artichokes, though they more closely resemble ginger root than normal artichokes. Yummy grocer Dean and Deluca happened to be conveniently close to where I stayed earlier this week, and it was with much interest that I noted they carried the nubbly little root veggie. Upon setting eyes on them, I was immediately taken back to my memorable evening spent at Toronto’s Bricksworks (run by the Canadian not-for-profit company Evergreen) for their inspiring inaugural GE Cafe Chef’s Series.

With the aim of simultaneously entertaining, and educating Torontonians, the series boasts an impressive array of big names in the Canadian food scene; writer/host Ivy Knight, Chef Anthony Rose, and food/wine journalist James Chatto are just some of the impressive names who will be taking part in the bi-monthly series. The combination of info and eats was launched a few weeks ago with Chef Jamie Kennedy, winemaker Dan Sullivan, and Executive Director of the Ontario Culinary Tourism Alliance, Rebecca LeHeup. Together, the trio talked up the role of Prince Edward County and its bounty of incredible food and wine producers. Personal experiences, cooking techniques, and local events were all chatted up between the beautiful four courses served as part of the event. 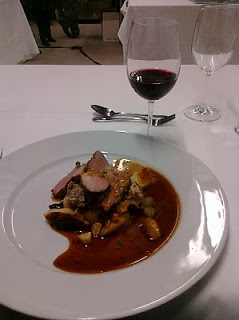 Prince Edward County is located about two hours east of Toronto, and contains the town of Picton, popular with summer holidaymakers. Nearly everything served within the gorgeous three-hour event was from the area -including the sunchokes Chef Kennedy used for a beautiful, velvety soup. Chef Kennedy told the assembled crowd how he came to buy his farm in the County, his love of the land, and how his passion for food and wine have guided his style of cooking -fresh, approachable, and deeply connected to the concept of terroir. His original idea was to serve goat in its various aspects: the cheese, the milk, and the meat. However, unable to find local goat meat, he substituted lamb, and… it was magical. Lambs shoulder was braised in goat milk (an Italian technique, the chef noted), while leg was served roasted, succulent and sweet; the lot came with little happy pillows of goat cheese gnocchi, laced with a thin, flavorful gravy. As I told Chef later, I experienced a “Sally-in-the-diner” moment eating it. No kidding. And to think it was the first time the award-winning Order Of Canada chef had tried that recipe! Color me shocked… and utterly, thoroughly, deeply satisfied.

Satisfaction continued with a luscious dessert of homey apple strudel with nutmeg ice cream; I wound up skimming the serving dish with my finger, which should tell you something about how often I eat homemade ice cream. Kennedy happily shared the recipe after he’d carved up pieces for everyone. There was something truly rewarding about seeing Kennedy work in the simple Brickworks kitchen, with its home-style oven and smooth-top elements. The way he carved bread, chopped veg, even washed and sharpened his knife conveyed both intense skill and innate gentleness. I enjoyed watching him go about his culinary business as much as the information being provided by LeHeup and Hill, though in a different way; it was, really, a beautiful, silent, poetic counterpart to the torrent of words and images, a soothing glass of red to the sparkling bubbly of LeHeup’s passionate presence. 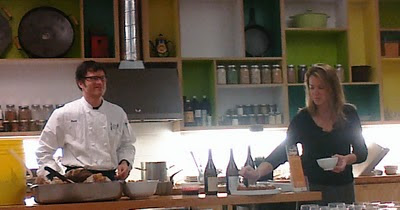 In the wine vein, Sullivan’s handywork paired beautifully with every course; the affable vintner shared stories of his challenges and quickly, clearly answered all questions directed at him with simple, everyday language. I especially enjoyed the red selection he brought, a rich, fruity red that operatically sung with the succulent, tender meat of the main course. Sullivan planted his vines in 2001, and he joked about having “an overnight success in a decade” with Rosehall Run. Kennedy’s interest in the region was, he told us, sparked by the wine potential there; he described himself as a “committed oenephile”, and it showed in everything he cooked for us. “What grows together goes together” was the theme of the evening, and I left determined to visit Prince Edward County once the nicer weather comes.

But, being in New York this might prove difficult. We’ll see. In any case, I have a whole new appreciation of the riches of the region, the talents of its food producers and winemakers, and just how good sunchokes -despite their “gnarly” appearance -really are.