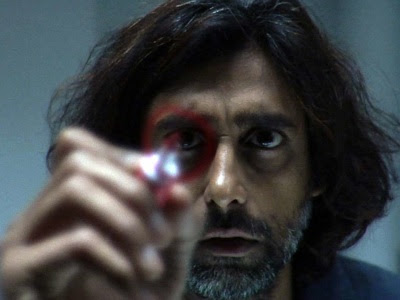 I like being challenged in cinema -confused, even. Daniel Cockburn‘s You Are Here fits the bill beautifully. Part detective-story, part Borgesian puzzle, the work draws on a number of influences, from Dali to Phillip K. Dick to steampunk. Cockburn has concocted a tale that will furrow your brow even as it opens your heart.

I had the opportunity of speaking with actor-filmmaker Nadia Litz about the film -and her own work -as part of this year’s Toronto International Film Festival. It was illuminating to glean her insights, as well as her thoughts around acting with fellow Canadian thespian Tracy Wright, whose final onscreen appearance in the movie is as much about the heart as it is the head. Wright waas beloved by many in the Canadian arts world; she tragically passed away earlier this year, leaving a gaping hole in the theatre and film worlds here. Ergo, the meeting of emotional and intellectual couldn’t be made more plain than in the many close-ups Cockburn has of her face. Litz is eloquent in speaking about not only a great actor, but a great personal friend.

Nadia Litz on You Are Here by CateKusti

Equally, the actor also witty and wise in chatting up her own short that screened at TIFF. With the intriguing title of “How To Rid Your Lover Of A Negative Emotion Caused By You”, the work is a zesty mix of macabre humor and ugly truth. Like, literally pulling-stuff-out-of-yours-and-your-loved-ones-guts truth. Ouch.

I really felt Litz really hit on a piece of honesty in this film, in a much more bold, if equally compelling way, to You Are Here. Both works are, at their essence, about the importance of connection; even fraught with peril, upheaval and discomfort, human connection is perhaps the most valuable thing we have -and the thing we most often take for granted, that passes us by, flickering, dying, and finding manifestation in something -anything -else, even its reverse. Ugly truths indeed.

Get on your celery glove.

Somewhere, somehow, Dali is twirling his moustache and cackling.