Get on your celery glove.

Somewhere, somehow, Dali is twirling his moustache and cackling.

“Man is least himself when he talks in his own person. Give him a mask, and he will tell you the truth.”

So wrote Oscar Wilde. It seems fitting, the day after Halloween 2009, to think about this quote. Were the ghouls, goblins, and dead Vegas girls running up porches, ringing doorbells, and dancing at parties really make-believe? Or do they reveal something deeper about the wearers? Maybe masks are, to paraphrase Wilde, the truth that dares not speak its name.

I’ve thought about the lines that run between, around, and through notions of play, theatre, past, present, and art a lot lately. As a woman in the twenty-first century, my sense of identity should be more fluid than ever, and yet female image -iconography -feels constricted, claustrophobic, and shrunken. The Irish great may have been using “man” in a general sense, but in considering some recently portrayals of women, I’m coming to believe the masks being presented depend entirely on who is is providing the costuming.

Pop star Lady Gaga has provided no end of interest or amusement for the media-hungry masses. Body stockings, planetary rings, masks -Stefani Germanotta is, in many senses, creating her own personal mythology and wider social iconography in a weirdly similar way to her predecessor, Madonna, who did the same thing over two decades ago. Gaga’s mum may have christened her ambitious daughter with a similarly funny-sad/flaky-weighty nickname, but both have earned their wider social royalty; the latter is making it abundantly clear she never needed a counterpart Lord to have her own title. The clash between the perceived upper echelon of societal position and the Dadaist impulse of giving nonsense names is what Stephanie seems to be aiming at. Maybe. Similarly so Madge, who replaced the outdated, insincere societal version of holiness (and the saintly female icon image) nearly thirty years ago with her own brand of melted-down, rough-soft Pop Culture Femme-Prayer. ‘You may adore me,’ her mask implies, ‘but you will never really know me.’ 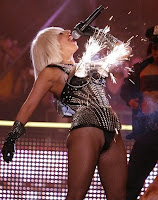 And so we haven’t, even with babies, charity work, divorce. Madonna is shrewd enough to know that pop culture doesn’t care about the deeply personal, that there’s power in the unknowable. Gaga knows it too. Her hit song “Poker Face” celebrates the power of sexual power at the same time as it shakes hands with Mr. Invisible. Bearing in mind the rough sexual allusions, there’s much to be said for the benefits of maintaining a “pokerface” -it is, after all, another mask. Did we hear Madge respond to ex-husband Guy Ritchie’s inane “gristle” comment with any real growl herself? Maintaining the mask at all costs -even in the face of classless accusations related to pat intimacies -seems to be a necessity for the modern woman.

Cindy Sherman has made a career out of donning masks. Within the California girl, the secretary, the socialite, and the sad clown lives an awe-inspiring range of emotion and experience. This isn’t just about using ingenious costuming, makeup, and photography to capture a “look” -Sherman’s work goes one step further than fashion, turning the “look” into a wider storyline that is frequently disturbing, unnerving, and strangely… real. It’s within the artifice that she finds a kind of truth that speaks to our perceptions around women and their relationships to image. Sherman doesn’t just put something out there to be merely provocative -that’s easy -but to ask questions around ideas of beauty, value, and the hypocritical politics of chauvinistic “inclusion.” She does it in a way that in some ways reminds me of Madge around her Sex book days -willful, angry, daring, fearless, celebratory and challenging.

Seeing Sherman profiled recently on Art 21 (on an episode cleverly titled “Transformation”), I was reminded of something a fellow journalist had written about getting the pop culture we deserve. Publicists and managers now, more than ever, sculpt those in the public eye to be utterly envied, relentless talked about (in good or bad terms), and mercilessly duplicated. How much does someone like Lady Gaga actually control what goes out there? How little? The internet age of music and information consumption has meant that the concept of ‘instantaneous’ has been elevated to an artform. Only yesterday the Globe and Mail featured Halloween costumes that could easily transform you into someone famous. On the cover? Lady Gaga. Duh. Old idea; new ethos. What she is -and I’m still working it out -is somehow far less than what she represents: the colourful, noisy, thighs-splayed busting-open of a modern female identity that is merely an implosion in an old, dirty box marked “hawtness.” In their staged SNL catfight, the first thing Madge grabbed, and kept trying to pull off, was Gaga’s white-blonde wig. Through that small gesture of playful comedy, something whispered, “redefinition, reset, revolution… but only if I’m pulling the strings.” Maybe, as a woman in the twenty-first century, that’s both the beginning, and the end, of escaping that dirty little box, while keeping a poker face firmly, squarely, and sadly, in place.