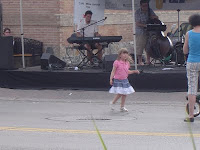 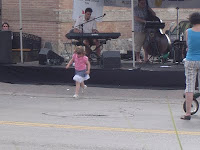 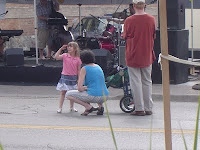 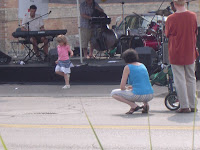 Today I bicycled down to my local summer jazz festival. This little girl caught my attention -and I imagine, the attention of the other onlookers, too. She did some fantastic free, interpretive dance to a jazz trio (a vocal-less jazz trio, I should add), shaking, twirling, hopping, and bobbing her head. It was incredible and inspiring to witness her visceral reaction to a form of music many people find obtuse and difficult.

Watching her also brought to mind the hoary old argument of to-have-kids or not-to-have-kids. I’ve heard a lot of this sort of thing lately, and though I’ve already made my choice, in no way did it take away from my enjoyment of watching this little one rejoice in the incredible flexibility of form and the wonder of sound. 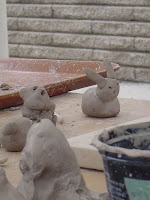 Part of the jazz fest included a street dedicated to artisanal work. There was a section where children could craft their own clay sculptures. Tiny creatures, some imagined, some real, all done with the delicate grace only young fingers possess.

Looking at the sculptures, the dancing figures, the tiny hands on balloons and the wide eyes staring agog, amazed, delighted at the sounds floating through the air, I can’t say I felt any worse in my choice to remain childless, but I also acknowledge the special magic and unique, open energy children bring. They remind us to stop, to smile, and most importantly, to play.

Use It, Don’t Abuse It

I’ve recently been considering the importance of playfulness, particularly since I was so woefully bereft of it in my twenties. One particular moment, when I first moved overseas, still strikes me as a time when I probably should’ve called up the playful/childlike/imaginative spirit, but didn’t -cowed, I suppose, by insecurity, self-consciousness, and worried what my friend at the time would’ve thought. But once that junk gets cleared away -the need for acceptance, the drive for appeasement -the sense of being a child again is allowed to shine through.

After all, if you’re a kid, do you really care what others think? At a certain point, sure, the self-consciousness kicks in. But before that, there’s a joyous, free time when the world is yawning open with possibility and wonder -it’s the spirit I tend to revel in whenever I engage in any kind of creative activity. Using my imagination in that child-like spirit makes me more productive to plough through adult stuff later on, too. It clears out the clutter, makes me calmer, happier, and more ready to embrace the myriad of people, experiences, and expressions this world has to offer.

So yay Elmo! Going to use my imagination now to sketch, write, and perhaps see about putting together my next painting -based not on a flight of fancy, but on an incredible photograph of women in Afghanistan protesting recently. There’s no way I could’ve even approached this subject matter in the past. Now however, there’s a weird kind of a calm, combined with an inner riot -a sort of neat yin and yang, I guess. We’ll see. I’m staying open to the possibilities, and using imagination, yes, combined with awareness. So far, so good.