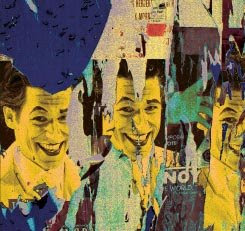 I attended the opening of the new Rick Miller show Hardsell Thursday night. Still not sure what to make of it, really -there are a lot of ideas around selling and advertising, and what that means to not just the wider society that created the selling culture, but to culture as well. Aren’t performers -of any ilk -essentially trying to “sell” you something, tangible and otherwise? I’ll be interviewing Rick Miller next week (Friday morning, in fact), so maybe I’ll get some answers, or at least ideas, about how the show came to be.

Hardsell is another collaboration between Miller and Daniel Brooks. The pair previously worked together on the alt mega-hit Bigger Than Jesus (which a former editor of mine called “a ninety minute religious rant with TVs” -he also added that he liked it, natch). Like “Jesus” and Roberts’ other hit, Machomer, Hardsell mixes improv, Pirandello-esque meta-theatre, sharp observations, role-playing, nods at past conventions, and Miller’s own awesome gift of mimicry. In the show, he accurately imitates (vocally) a wide range of folks, including Morgan Freeman, James Brown, and Richard Dawkins, as well as perform a clever riff as a German marketing expert.

Mainly, though, he plays Arnie, the supposed mirror-twin of Miller himself, a bitter, washed-up entertainer tossing out proclamations, observations, cynicisms, witticisms, fantasies and hard-to-soft pitches. With his clown-like makeup and slick white suite with shocking-red satin lining, Miller gave a nod to the many mimes, clowns, and stylized performers within the cultural spectrum –Charlie Chaplin’s Little Tramp, the Joker, Kabuki performer, Mexican wrestler, Godot’s tramps, and even… Tom Wolfe.

And yet, this is the main reference that came to my mind: