On Bill The Quill

Today marks the anniversary of Shakespeare’s death in 1616 (and, some might argue, his birth in 1564).
Much has been written, of course, about the playwright who left an indelible mark on drama and culture. It’s impossible to imagine life without him; like Andy Warhol (more on him in a future post), his influence is felt everywhere. Amidst the volumes of academia and the wide-eyed worship, I frequently feel as if the human -the regular, ordinary, beer-swilling, bum-pinching Bill -gets lost.
Filmmaker Anna Cohen seeks to find him, with this wonderful stop-motion animation video, Shakespearean Tragedy (A Comedy), that reminds us that Shakespeare probably suffered from something that afflicts writers everywhere. Hey, we all know Romeo And Juliet was inspired by various poems and stories, but it’s fun to see the figures come to life on the blank pages before him, and I love the contemporary touches.
I never enjoyed reading Shakespeare myself; when I’d have to do for high school or university, I’d go to the library and borrow the RSC audio or video performances. There’s something about hearing those words aloud, in all their rhythmic, dancing, shimmying glory, that makes them -and their creator -feel more alive.
The clever thing about this video is that there’s no dialogue -it’s entirely visual. What would Bill say? What should he say? It’s refreshing to see a figure held in such high regard by so many has been rendered more human, even in clay. 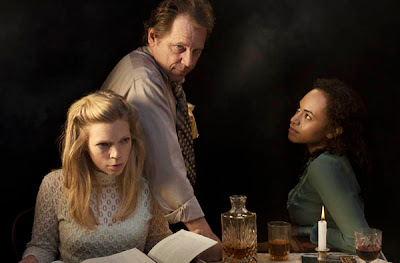 My favorite moment of Eternal Hydra occurred at the end of it. Coming out of Thursday’s opening night performance at the Factory Theatre in Toronto, my writerly companion turned to me, her eyes wide, her voice trembling, trying to capture what she’d just seen.

“It’s about authorship!” she exclaimed, her voice filled with wonder, “and … theft! Identity! Writing! And … art!”
She had good reason to be filled with wonder. The Crow’s Theatre work is easily one of the finest works produced in Canada in more than a decade. Tackling the tough ideas around voice, ownership and originality of work, playwright Anton Piatigorsky has created a masterful tale that is part mystery, part supernatural romance, all drama, and unquestionably all-engrossing. The play touches on racism, sexism, classism, and the cutthroat worlds of academia and publishing, using the character of one Gordias Carbuncle (played by award-winning actor/director David Ferry) and intrepid researcher Vivian Ezra (Liisa Repo-Martell) to piece together the history of the sprawling, unfinished work known as Eternal Hydra.
I had the opportunity of interviewing David Ferry and Liisa Repo-Martell during their first full production of the work two years ago, at Toronto’s Buddies In Bad Times Theatre. Their insights are as fresh and telling as ever -about both the work, and the nature of the hydra that is human creativity.
The hydra, for those without a handy copy of their Edith Hamilton about, is a multi-headed monster from Greek mythology. Hercules was charged with killing the beast, but found it daunting, because for every head he cut off, one (sometimes two) grew back in its place. Piatigorsky mines this myth for all it’s worth, and then some, to fantastic, engrossing effect. Carbuncle’s mammoth 99-chapter tome is hauled around by poor Vivian, and at one point, fellow writer Pauline Newbury (Cara Ricketts) tells her “it looks like it’s ripping your shoulder off.” No kidding. Vivian takes on an Atlas-like status, carrying Carbuncle’s words, along with her own crushing perceptions of his supposed “genius” reputation, thus supporting an entire world that may, in fact, be fiction in and of itself.
The notion of what constitues that genius, as well as what makes for a good writer, are explored with deft, dramatic strokes. But this isn’t some distant, heady dramatizing; instead, there’s a zesty contemporary corollary with the online world that is unmistakable, especially as the play progresses. Eternal Hydra may be set in some non-descript 1980s publishing world (with flashbacks to Paris of the 30s) but its concerns are anything but antiquated.
Indeed, the work is filled with numerous references -to literature, history, various cultures and indeed, the mythology extant within the title -and yet none of it feels heavy-handed or pretentious. Perhaps that’s because of the light touch of director Chris Abraham, who infuses this production with a good dollop of humor, jaunty timing, clever staging, and… oh yes, sex appeal.
Ferry’s portrayal of Carbuncle is by turns sad, scary, sexy, and ever-scintillating; scenes with Cara Ricketts, as the writer Selma Thomas, particularly sizzle with the chimeric qualities of lust and revulsion. As the protective, priggish Vivian, Repo-Martell paints a lush if tragic portrait of a lonely, obsessive woman whose best friend may very well be a figment of her over-heated imagination. As publisher Randall Wellington, Sam Malkin offers a solid, sly portrait of corporate cynicism that gets turned on its head when he later portrays the same character’s lusty father. It’s a testament to both the talents of the actors as well as the show’s designers that a deep vein of believable, tension-filled atmosphere is maintained, even as places, characters, and contexts shift and transform. John Thompson’s set and lighting design, in particular, is elegant and minimal if deeply dramatic and affecting -kind of like the play itself.
Eternal Hydra is fast becoming one of my favorite contemporary plays because yes, it is smart, sexy, and funny, but it’s also worldly, a quality I feel is sometimes sorely lacking in much modern Canadian drama. It’s here, along with so much else, in droves. There’s a reason this play won four –yes, four –Dora Mavor Moore Awards in 2009. It’s great, and I’m waiting for the day it runs in New York City. Until then, run, walk, fly -do whatever it takes to get to the Factory -because take my word for it: you want to tangle with this hydra. You really do.
Photography by Robert Popkin. 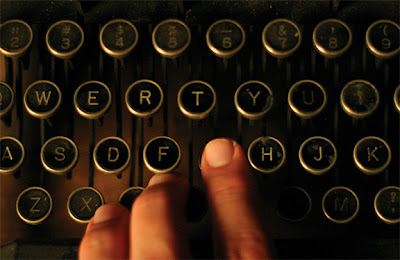 I’ve been thinking a lot about communication lately -the ways we use it (or don’t use it) and the importance it has to some of us, particularly those in the arts. Communication is what every artist attempts through a chosen medium. Whether it’s dance, film, music, writing or acting, every creative act is an attempt to communicate something to someone else. Within that chosen form of communication is a myriad of ideas and influences, not all of them original -some are sifted through the rough grains of hard-won experience, others are left unfiltered for consideration and conversation. When it comes to presenting a work of art, who can really say what is wholly original?

The question becomes all the more cloudy in the world of words, where research and source material often become intimately intertwined with the writer’s own opinions, approach, and sometimes, life work. History is fraught with examples of works that, while considered utter genius, are suspect in their originality at least, and acts of plagiarism at worst. Think of playwrights like Shakespeare, whose works were frequently based on other (popular) tales floating around, or the Bible, a collection of tales written and re-written through the centuries to suit the age and ruling classes.

Anton Piatigorsky tackles the huge questions swirling around authorship, originality, voice and its relationship to identity, and what makes art … well, art, in his play Eternal Hydra, now on in Toronto at Buddies in Bad Times Theatre. This Crow’s Theatre production brings together the same acting/directing team from last spring, when the work was workshopped before an audience for a week. Originally starting out life as a one-act play at Stratford’s Studio Theatre, the work has been greatly expanded and explores larger notions of historical detail, authenticity, and what it means to really “create.” He uses the image of the mythical hydra -the scary monster Hercules fought with the multiple heads -as a metaphor for the writing process itself. Just when characters -and audience, in fact -think they’ve figured out what links writer Gordias Carbuncle’s work to past sources, another connection presents itself that renders theories incomplete. Throw in notions around race, gender, and religion, and you have one hell of a heady night of theatre.

That doesn’t mean Eternal Hydra is cold, however. It’s heady, but it’s also full of heart. Cast members Karen Robinson, Liisa Repo-Martell, Sam Malkin, and David Ferry, as the self-hating maybe-genius Gordias, all give fully-fleshed out performances that make you feel something beyond intellectual wonder. Piatigorsky’s piece is Stoppard-esque, no question, but it’s also fascinating for its mix of the epic and the intimate; the scenes between Robinson, as impoverished black writer Selma Thomas, or Repo-Martell, as the smitten researcher Vivian Ezra, and Ferry’s Carbuncle, are moving, enlightening, disturbing and challenging. Throw in some evocative lighting, where characters frequently move in and out of shadow, as well as multiple plotlines, where characters fall through time, and frequently blur lines between eras and realities, and Piatigorsky’s work is suddenly about a whole lot more than historical appropriation. It’s about life, art, and yes, communication -how we do it, and more importantly, why we do it.

Artists get communication: we’re just not sure if what we’ve produced is actually ours at the end of the day, or simply another screaming head. I mean really, there’s so many of those around already, competing for our attention, demanding time, energy resources, or sometimes, just perhaps, whispering something incredible.