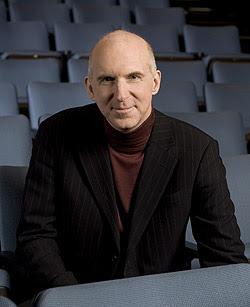 When Matthew Jocelyn and I sat down recently to talk about the new Canadian Stage season and how to make the Canadian theatre scene better, I never could have foreseen the amazing insights that would emerge from that short conversation.

I already covered the company’s 2010-2011 announcement several month ago, and was properly impressed, but I was eager to know the whys and wherefores, and just how Jocelyn, who is the company’s Artistic and General Director, planned to make this season appealing to a city where the great majority of theatre-goers (the ones not in the luvvie camp) far prefer the safe and familiar (and frequently cutesy) instead of the new and strange (and frequently ugly -if fascinating). How to integrate the instinct of elevation with the necessity of sales? It’s a tough riddle to work out, especially within the harsh conditions many Canadian artists live and work (or try to work) under.

There are many untrue cultural stereotypes of Canadians: that we all like hockey, that we love winter, that we say “eh” after everything, and we worship Tim Horton’s coffee. (Cue my extreme eyerolling.) The one stereotype I’d argue holds a kernel of truth is that, by and large, we don’t like experimentation when it comes to the arts, and we’re leery about artists who push the envelope. (As an aside, dear Lady Gaga fans: a Canadian did it first.) Jocelyn, by virtue of living abroad for so long, wants to change the Canadian tendency toward caution in the arts -gently, yes, and with much patience too, but with an equally clear vision of his company’s 21st century mandate and its relationship with Toronto. A theatre company should do more than put on safe, middle-of-the-road stuff, but at the same time, shouldn’t isolate either its core supporters or potential newcomers with art-with-a-capital-A material.

What’s notable (and heartening) is our too-brief discussion of how the internet has really rendered thee companies more able to communicate between and amongst one another -so whether you’re in Dublin or London or New York (or even Toronto!), sharing and exchange ideas has never been more prevalent -or more important. No company is an island, or in this age, can afford to be. It’s a lesson well worth heeding.

A note to my international readers: please don’t think you have to be in Toronto to enjoy this chat. The things Mr. Jocelyn discusses -marketing, outreach, planning a season, trying to balance populist choices with an embrace of new, multi-cultural programming -are issues every arts company faces, everywhere. Let me now what you think; if you’re an Artistic or General Director, I want to know how you’re tackling the challenges of attracting and cultivating audiences with making interesting, inspired programming choices. As my chat with Mr. Jocelyn taught me, cultural exchange is more than a few complimentary words left on a Facebook wall.

A few gorgeous tidbits of theatre-rama from around the web today:

Gerald Schoenfeld, Chairman of the American Shubert Organization, has died. He was responsible for bringing many of the big shows (like Cats, Phantom, and A Chorus Line to Broadway. His obituary from the New York Times is here (you’ll have to register, but I guarantee you, it’s worth it). Schoenfeld was an interesting figure; while he had a lot of detractors, no one in the industry would deny his importance within the theatre world. Rocco Landesman, President of rival Jujamcyn Theatres, credits Schoenfeld with saving commercial theatre. He may not have been popular in not-for-profit circles -“There’s no profit like not-for-profit,” he used to say -but reading his obit, I can’t help but think that his approach is such a good model for theatre, all theatre, anywhere. From the big things to the small things, Schoenfeld never left any detail to chance, and he fought for his productions. He also gave a lot of people jobs and consistent work. And, to quote the article, “Mr. Schoenfeld argued tirelessly that the theater was an economic engine for the city and deserved greater help from City Hall.” Now there’s something we can get behind.

Ballet Victoria, a smaller ballet company than Ballet BC with just 10 dancers, is very aware of the need to attract new audiences.

“We draw in the audience with a bit of a surprise. I always build my season with one big ballet that will draw a crowd that might not necessarily see classical ballet, and then when they see the level of the dancers and the choreography they’re drawn to other works,” he said.

Over at the Guardian, Christine Bacon, the Director of Actors For Human Rights with UK-based theatre company iceandfire, rebuts the notion that theatre can’t respond with appropriate swiftness to current events. Not only is theatre able to do this with the required fast action, but, she argues, it should. And it doesn’t depend on funding, either:

Because we use a rolling cast of actors who donate their time and have no technical requirements, we can provide a “rapid response” event for whichever organisation asks us to turn up. We normally perform in churches, village halls, pubs and lecture rooms – anywhere we’re invited, really – eliminating the usually prohibitive cost of hiring a theatre space. This method allows us to act as messengers; rushing the urgent news to audiences who need to hear it now – not, in two year’s time, when the Arts Council funding has come through. It’s the economy and portability of the concept that really allows us to deal directly with some of the most pertinent issues of the day…

It reminded me of Kelly Nestruck’s columns from earlier this year about the lack of current events being portrayed on Canadian stages lately (if anyone can find that link, post it please). Theatre is Territory has opened up the discussion about politics and theatre because of the article. Hopefully it generates a good discussion. Theatre can be, and is, many things to many people, and I believe there’s room for all of us -to learn, to grow, and to expand.

Off to see Soulpepper’s A Christmas Carol tonight; I’ve not seen their production, or indeed, any production of Dickens’ classic tale, onstage, ever. Friday’s booked for Canstage’s It’s A Wonderful Life, the staging of which I find greatly intriguing; it’s set as a radio play, which hits a personal/professional interest-button. But thematically, both are more than just jovial feel-good tales. As Richard Ouzounian wrote, no two works could be more relevant in this economically harsh festive season.