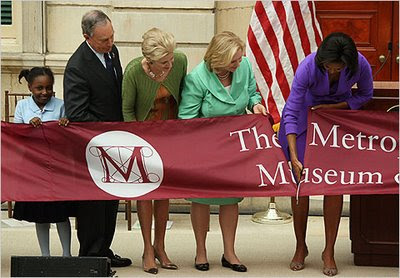 This is very inspiring.

And I think Michelle Obama is absolutely correct. I hope we get a Canadian politician in power making the same statement soon.

I had the distinct pleasure of interviewing journalist Steve Lopez about his book The Soloist last year; the film version of his story, involving his unlikely (if wonderfully fated) relationship with musician Nathaniel Ayers had just wrapped, and I was curious as to how Lopez felt about his relationship with his schizophrenic, formerly-homeless friend being portrayed onscreen.

I’ve admired Lopez for a while, because he engages in the sort of journalism I aspire to: socially-conscious, full of humanity and integrity, shot through with passion. He writes about the most marginalized people in our society -people like Mr. Ayers, whose stories, while incredible, might never get told were it not for his bravery and heart. Yes, heart. Some journalists have them, you know.

After being moved up from its December release, the film The Soloist was finally released yesterday. I’m curious to see how it will marry the hugely important artistic sides of the tale with the terrible, sometimes-frightening twin realities of mental illness and homelessness. At the end of reading Lopez’s book, I was moved beyond words, and the only thought I had was to put on Beethoven. I’m sure Mr. Ayers would like that.

The Brand Library Art Gallery & Art Center in Glendale, California is currently hosting an exhibit entitled Man’s Inhumanity to Man: Journey out of Darkness. To quote Mark Vallen, an excellent blogger and one of the forty-four artists taking part, the exhibit “examines human rights violations that have occurred around the globe – the 1915 Armenian genocide, the Jewish Holocaust, repression in Central America, current atrocities in Darfur, and more.”

Looking through the various pieces on the website brought to mind my experiences working for Amnesty International when I lived in Ireland in the late 90s. A number of people who had suffered human rights abuses in other countries were working out of the offices, and a great many were talented artists -painters, musicians, dancers and writers. At Christmastime, some offered their services and painted pieces that were later sold in the Amnesty store; others opened their homes to invite us to experience the joy of their culture. It was about sharing their lives as much as it was about using art -and others’ experience of their art -to heal their wounds.

As the co-curator of the Glendale exhibit says, “Art is a powerful agent in society with the ability to awaken our consciousness, transform our minds, and ignite a desire to bring about change… this exhibition aims to do all of these things.” Get thee to Glendale if you can.

Last week I attended the launch of Wayson Choy‘s new autobiographical book, Not Yet.

It was too crowded and frantically busy to get a proper word with him this week, but I’m planning on interviewing him for Take 5 soon. Stay tuned. 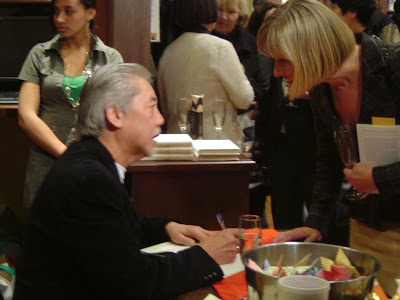 There’s something about dinosaurs that stirs human imagination. Over at my Myspace blog, I explore the connection via running into three different dino-related sites online this past week.

It’s interesting, particularly in light of a conversation I had lastnight with a performer around ideas of so-called “low” art and “high” art -what constitutes each? And are these lines vanishing? I, for one, hope so. It’s all about play, after all. 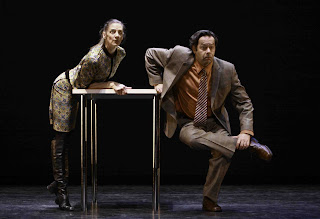 The Rape of Europa is a stunning documentary. It traces the systematic looting and destruction of personal property by the Nazis during World War Two. It also explores the extensive efforts of those across Europe to protect some of the world’s greatest masterpieces. I couldn’t help but feel, in watching it, a strange connection with those who helped to pack the entire contents of the Louvre, the Hermitage, the Uffizi; I’d have done the exact same thing -if I’d been lucky enough to escape the trains going to Bergen-Belsen, that is. The film shows just how much the Nazis understood the importance of art; they were thieves, yes, but they were smart thieves. They comprehended the ways in which culture could shape and manipulative society as a whole.

So with a mix of hope and resignation I read this morning’s latest news about the Canadian Portrait Gallery; apparently those involved with getting the gallery an actual, real building are going back to Plan A -to use the existing former U.S. embassy in Ottawa. It makes financial sense, and, it’s just sitting there: why not use it? Still, I feel like hauling Mr. Harper away from High School Musical and forcing him to watch The Rape of Europa. I’m not implying one’s better than the other -they are clearly different beasts -but I think it might be worth a couple hours of our PM’s time. The scenes of jubilant Florentines crying and madly applauding as the trucks containing their city’s art return is very moving. I wonder if he’d understand the larger truth of that scene.

Equally, I wonder what Canadian mayors would make of London mayor Boris Johnson’s recent proposal outlining strategies for the arts. Could we see any of them doing such a thing? Hmm. Of course there are very pressing concerns right now, but I think a bit of balance is in order right now, considering the hysterical nature of the times. Guardian writer Charlotte Higgins’ recent post on the cultural initiatives of “Bojo” is very interesting, and this line struck me, hard (italics mine):

I also agree with the authors of the report when they write the following: “It is often presumed that young people will only like art that they can immediately relate to. Working-class students may be steered towards popular culture like hip-hop, new media and film, on the basis that they will find older art forms like opera or ballet irrelevant. This approach patronises young people and limits their horizons. With proper support and encouragement, arts organisations can play a big role in opening young people’s minds, and deepening their appreciation of culture from any time or place.” It’s about time someone put that thought in black and white.

In light of that, I decided to send the link, with highlighted quote, along to a number of leaders of arts organizations. Happily, I’ve received numerous positive responses, too, among them a hearty “hear, hear!” from the Stratford Shakespeare Festival, a heartfelt ‘thank-you’ from the Theatre Centre, and this, from Marilyn Field, the head of DAREarts:

I’m not a blogger on internet writer / reader BUT I must address this (or you for me) since our 13 year experience working with ‘at risk’ kids aged 9 to 14 from Canada’s cities, small towns and rural areas has been that our young people are IMMEDIATELY INSPIRED by opera, ballet, Shakespeare, etc. The criteria is NOT working through their popular culture BUT RATHER presenting them with EXCELLENCE. Seeing my inner city, at risk, 14 year old students lining up after an Esprit Orchestra concert to get autographs of composer R. Murray Schaefer was my first revelation that if we give our kids excellence, they will identify with it and want it more in their lives.

Art matters to people -even, or especially, in these harsh economic times. No matter what form the hardship has taken, humanity has endured, and an expression of that triumph is the place that art and culture are given in our society. Clive Barnes, the venerable theatre and dance critic for the New York Post, has passed away.

I had the opportunity to meet Barnes in 1995 when I traveled to New York City for a much-praised production of Hamlet that featured Ralph Fiennes as the melancholy Prince. We met at Cafe Un Deux Trois, just beside the Belasco Theatre, and he regaled my friend and I with his great tales one splendid evening. He was, to quote fellow theatre critic John Simon, “charming, witty and learned.” Just so.

Barnes was a big personal inspiration, and he will be very missed.