That’s a big part of what I so love about Spectacle: its stripping-down of fancy-dancy songs to their bare essentials. Rather like a less-hip cousin to Unplugged (but one with an incredibly good wine cellar), the show features a good slather of intelligent, artist-to-artist chat, discussing woodshed-ish chord-change stuff as well as inspiring books, poems, and places. Simply put, the show is a celebration of musicianship, artistry, and sonic inventiveness, with a good dose of humanity, curiosity, and discovery. These are human beings in Costello’s able hands, not mere superstars. His fascination and respect for his guests shows, and it’s inspiring to watch.

Rounding out the big-name guests on April 3rd will be the repeat showing of the Spectacle taster offered back in December, with Bono and The Edge of U2. I first heard about this episode far before its airing, when the program was taped the week the band were in Toronto last September. My curiosity was stoked, if only because the opportunity to see members of a super-mondo-mega-band in a small venue struck me as a unique opportunity to see taken-for-granted artistry up-close.

Stadium theatrics aside, U2 have always struck me as keenly aware artists. It was good to hear bands like Kraftwerk and Neu! get a mention by Bono as important influences; I sometimes don’t think a band of U2’s stature are given proper credit in terms of their passion for the decidedly non-mainstream sounds that have influenced them. Maybe it’s because those kinds of bands -the stadium-filling ones -aren’t thought of as artists, ergo, they never get asked the kind of artist-focused questions Spectacle specializes in. I’ve always heard a lot of different influences in U2’s work, while marveling at the way such off-the-radar sounds can be re-envisioned and rejigged for mass consumption and appreciation. Is that the mark of true artistry? Or just being clever? I’m still working that one out (though I’m sure longtime producers Brian Eno and Daniel Lanois would have something to say, being incredible artists in their own right. I’m still waiting for Costello to interview them…).

Whatever the case, friends will probably tell you I have an unusual (bizarre, offbeat -take your pick) appreciation of U2’s creative output. Part of that appreciation includes a song called “Please“, taken from U2’s woefully under-appreciated 1997 album, Pop. I was excited when I heard Costello had opened this particular tune; Mr. Pump-It-Up taking on “Please”? Yes please. 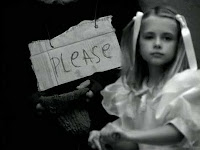 Words, together in some mystical sacrament with music, have always provided a heady, hearty kind of sonic seduction for me, and “Please” is the dark, dangerous lover in the night: imposing, insistent, important, passionate, scary, mysterious, operatic. Oh, and smart. Touching on themes common to U2’s music -God, choice, humanity, a capacity for love, forgiveness, violence and intransigence -the song had, at the time of its release, a particular connection with the Irish peace process. Seeing it live (for the epic PopMart) had precisely the same effect on me as seeing Pavarotti at The Met many years before: it was shattering. “Please” is a very underrated piece of art that is every bit as vital, moving, beautiful, sad and searing as it was when I first heard it. (Also, the video for it is genius. Kudos, Mr. Corbijn.)

When I tuned in to Spectacle last December, I was dismayed to find that Costello’s cover had been cut from the broadcast. I can only speculate the reasons why, but suffice to say it was a huge bummer. But the woe was replaced with a chorus of Hallelujah for the internet: I found another acoustic version of “Please” performed by Elvis Costello in 2000. I can only imagine the audience that September afternoon was treated to something similar.

Years may have etched a few more lines into faces and made hitting those high notes a bit more trying, but time has done nothing to that dark dangerous lover of mine: “Please” is every bit as breathtaking, thrilling, and overwhelming as the first time. Spectacle is so much more than mere spectacle, and sometimes -just sometimes -so are super-mondo-mega-bands.

Spectacle: Elvis Costello With… airs in Canada on CTV and in the U.S. on the Sundance channel. Check local listings for air times.