If you don’t know the name James Ehnes, you should.

The lively Canadian violinist is currently on a tour that brings him to Toronto on Sunday, May 29th, where, along with pianist Andrew Armstrong, he’ll close the eclectic 21C Music Festival at Koerner Hall, a beautiful performance space attached to the Royal Conservatory of Music.

Lest you think any concert that takes place within the proximity of a conservatory is fusty, stilted, old-fashioned, or (shock!) outright boring, Ehnes’ concert will feature one Canadian debut, one Ontario debut, and one Toronto debut. All the composers for the respective works are living: Aaron Jay Kermis is a Pulitzer Prize winner who studied with (among others) John Adams and electronic music pioneer Morton Subotnick; Carmen Braden, based in Yellowknife, integrates the sounds of nature within her work; Bramwell Tovey is a Grammy and Juno Award-winning conductor and composer who was once described by Leonard Bernstein as a “hero.”

21C, launched in 2014, was created by Koerner Hall ‘s Executive Director of Performing Arts, Mervon Mehta, to, as he puts it, present “artists and composers I think have distinctive voices. […] I want to give audiences music, not medicine.” The danger with contemporary composition is, of course, that audiences might find it too cerebral, not melodic, odd, discomforting. The Ehnes concert, like so many others in the 21C program (including the kickoff concert, which featured Tanya Tagaq), mixes the old and the new with aplomb, and, in addition to the works of Kernis, Braden, and Tovey, will also feature the music of Beethoven and Handel, as well as a piece by James Newton Howard, perhaps best-known for composing the scores to The Hunger Games movies, along with numerous Hollywood hits. Oh, and it’ll be live-streamed. The online world is something many classical organizations are still coming to grips with, though some (and I’d include the Royal Conservatory here) recognize its potential and are doing very creative and unique (for the classical world) things in order to make the medium more friendly, and less daunting for newbies.

Making this world less daunting feels like an M.O. for many artists and arts administrators the last decade or so. Having interviewed Mehta prior to the start of last year’s 21C Festival, I wanted to speak with a performer at the tail-end of this year’s edition; since I’ve seen Ehnes perform many times (though I’ve never seen him perform contemporary work), I was curious to get his thoughts around the program, the role of modern music, why he uses Instgram (and makes it fun!), and what new audiences want and expect when it comes to classical music and culture.

(And for the record, yes, this new audio format is something I’m experimenting with; it may expand over the next few months. Stay tuned!)

From the Facebook page of WNYC’s excellent music program Soundcheck:

Weird, yet fascinating prototype in which users cook and shape their own jelly … and make music with it. Believe it or not, neither Jell-O nor pitchman Bill Cosby are involved with this. It comes from, yes, France. 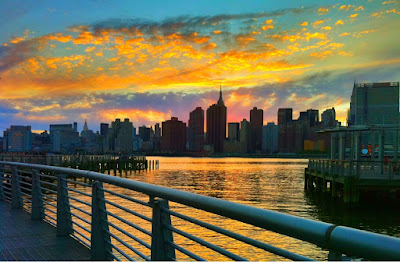 Weather terror has passed in the Big Apple.

It feels good to have that week over, though it did afford me some great opportunities to chat with some great people. One of those was John Coburn, a Toronto-based artist whose work is being exhibited on Wall Street September 1st through 15th. John did a series of sketches when 9/11 happened -and they’re gorgeous. I can hardly believe it’s been ten years. Oh my dear city, it’s been through so much.
Look out for that feature soon.
Also, and this feels right to announce here, casually: I’m going back to audio interviews. Not through a radio station, but independently. In this age of social media interaction, of emails flying to and fro across the vast buzzy darkness of cyberspace, there’s something awfully good about the human interaction of sitting in a room, with a live breathing, thinking person for half an hour, and having a real conversation. Would you tune in? Would you listen?
Fingers crossed. More soon. 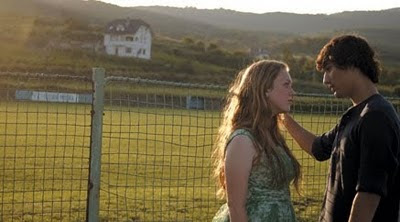 Modra was among the many movies I screened during the 2010 edition of the Toronto International Film Festival.

It tells a simple story of two teenagers on holiday in Slovakia and features members of director Ingrid Veninger‘s own family, including her daughter (Hallie Switzer) who plays the lead, Lina. I adored the movie for a few reasons: its clean style, its intriguing story, and its strong, natural performances. No sappy, swelling score or predictable outcomes here; this is an honest, honestly-told tale about intimacy, family, and the stretching, flexible nature of identity. No wonder it generated so much buzz at the fest, and received such positive reviews.

I really enjoyed my interview with Veninger (audio below), originally broadcast on CIUT’s morning show as part of my TIFF coverage. It was truly fantastic learning earlier today that she’d struck a deal with Mongrel Media for Canadian distribution rights. Yay! Today Canada, tomorrow the world!

Ingrid Veninger And Modra by CateKusti

If you happen to be in the Toronto area, you can see it one more time as part of TIFF; it’s screening tomorrow at the Yonge-Dundas AMC. If you’re not in the city, look out for Modra at a cinema near you soon. It’s a gem.